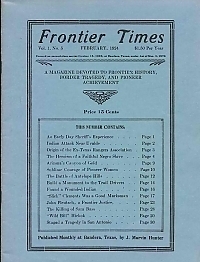 By J. B. Gillett, Ex-Sergeant

The following sketch was taken from an, old newspaper, the Hesperian, and was sent to Frontier Times by Mrs. M. B. Milam, Uvalde, Texas. Speaks of a man named Westfall who lived thirty-five miles below on the Leona, his only companions being a Frenchman named Louie, his dog "Ketchum," and his gun "Fetchum." In July, 1855, the Indians surrounded his house unseen by any of the inmates of this solitary ranch. Louie was getting dinner, "Ketchum" was taking his morning nap on the floor in the house. Westfall went to the door, not knowing of the danger lurking so near at hand. Just as he reached the door an Indian…

Origin of the Ex-Texas Rangers Association

Speaks of a French colony was founded in Dallas county, which flourished for a time - 12,000 acres of land three miles west of the Trinity river. At its most flourishing period it contained 500 members, who built small houses, operated stores and mills, and. lived to themselves. They came to estabish a Utopia... The founder of the colony was Victor Considerant, a man of wide reputation in France...

The Heroism of a Faithful Negro Slave

Very lengthy, detailed and fascinating account of the summer of 1852, when James Adams. William Snyder and Lucian Daley, conceived the idea of taking an extensive trip to the territory of Tom Green on a gold prospecting adventure. They had gained information from o1d Mexicans at San Antonio that there were rich mines of gold in Big Bend country of the Rio Grande and on West river in New Mexico within the present limits of Dona Ana county. Account is about Snyder’s negro servant, "Tom" described as "his favorite, almost a giant in size, six feet, six inches in height and very muscular and of middle age". During the prospecting trip, they were brutally attacked by Apaches, Tom proving himself to be of heroic character in the attempted rescue of his beloved master, Snyder. Amazingly graphic account.

An excerpt: The search for Arizona's fabled "Canyon of Gold" goes on through the generations. Somewhere in the desert hills, within striking distance of Tucson, the origin of the gold mined by the Indians for the Spanish masters may eventually be discovered. If not the gold itself, the ancient mines may be brought to light, and thus bring an end to the dreams of men who sift the mesa's sands for the end of the rainbow. If the secret is revealed the world may learn of a civilization rivaling that of Montezuma in Mexico or Tutankamen in Egypt for wealth and splendor. The Territorial Legislature of Arizona in 1881 published an official report which stated that "irrigating canals pointing to the presence of an immense population which had now' disappeared" had been found in the Salt River and Gila Valley, and that "Indians who have been taken prisoner have told of the existence of rich placer mines, but all efforts to find them have so far proved futile. " A mystic significance also. is attached to the writing of a Jesuit missionary who, in 1687, penned in code to the King of Spain the following: "A scientific exploration of Sonora (the early name of Southern Arizona) will lead to the discovery of gold and silver so marvelous that the result will be such as has never yet been seen in the world."

The Sublime Courage of Pioneer Women

Account of a family named Hutchinson who settled between the Neches and Trinity rivers, near Fort Houston. An excerpt: The brave old lady seized a heavy iron shovel and commenced a furious attack upon the Indians, and succeeded in beating one of them to the floor before she was tomahawked. Anna came to the assistance of her mother, but was struck on the head and fell to the floor ' apparently lifeless. The savages were not satisfied with this, then cut out her left breast, and left her lying on the floor in this horrible condition. They then brought some lard from the kitchen and emptying it in one corner of the house, set fire to it and left carrying some of the guns with them. Anna Hutchinson returned to consciousness and escaped from the burning house. Her mother's body was consumed. The girl wandered about until morning and succeeded in getting about two miles from the house, and becoming overcome with fatigue and pain, could go no further, but sank fainting to the ground, where she was…

The Battle of Antelope Hills

The battle of Antelope Hills, fought in 1858, was probably one of the most splendid exhibitions of Indian warfare ever enacted on Texas soil. This was the immemorial home of a tribe of the Comanches, they sought refuge here from their marauding expeditions into Texas and Mexico. Theirs was a veritable city of refuge, and should the daring rangers seek them they were sure to be encountered in full force. Mentions: Pohebits Quasho (Iron Jacket) Peta Nacona, Cynthia Ann Parker, who had been captured ten years before by a band of Comanches and never rescued, Colonel Ford ("Old Rip) Captain S. P. Ross, W. A. Pitts, Preston, Tankersley, Lieutenant Nelson

Build a Monument to the Old Time Trail Drivers

As recalled by Mr. E. E. Brooks of Burnet, Texas. Account of the brutal slaying of the Whitlock family by the Indians at Long Mountain, a settlement between Burnet and Llano. The Indians came upon Mr. Whitlock while he was plowing in the field. They killed and scalped Mr. Whitlock without any ceremony and captured his five-year-old son who was in the field with him. The Indians went to the Whitlock home. Mrs. Whitlock seized a gun and made a brave effort to….

Account of autumn of 1864 with a party of six men Taylor was crossing what is known as the "Big Divide" between the present site 'of Junction City and the headwaters of Johnson's fork of Guadalupe, he met upon a wounded Indian who when he saw Taylor...

"Slick" Clements Was a Good Marksman
By J. B. Gillett, Ex-Ranger

Account of June 1st, 1875, there was enlisted in Capt. D. W. Roberts' Co. "D," a young man by the name of W. T. Clements, born and raised in Brown county, Texas. He was legendary for his marksmanship and proved it repeatedly with his Sharps carbine.

"Wild Bill Hickok had "a disposition gentle as a zephyr, but a determination, stronger than. a hurricane!" So runs the rather remarkable description by an old-time Western chronicler of one of the most famous of frontier figures. A gentleman answering to this vivid description would be sure to leave his mark indelibly stamped anywhere, anytime. Wild Bill was born a dignified James Butter Hickok. - The birth place was near Troy Grove, La Salle County, Ill.. The time was May 27, 1837. He was one of a family of six children. Very interesting account of the man. Mentions: His experiences in Hays City, Abilene, (called the Gomorrah of the West), Ellsworth, Kansas, Dodge City, Bat Masterson, Charlie Bassett, Bill Tighlman, Luke Short and Doe Holliday his silent death in the Black Hills, buried at Mount Moriah cemetery, Deadwood, and nearby big resting place lies the famous' Western female character who admired-and perhaps loved-him so much, Calamity Jane.

Recalls Indian Raids in the 70's

October, 1873 Captain Henry Strong, was serving in the capacity of post guide at Fort Richardson, near Jacksboro, Texas. Indians were on a plundering trip through that section. They launched an attack on the Williams Ranch and Scott ranch south of the Brazos River in Stephens county. Henry Warren, Fort Richardson.

Early services in the Salt River valley are yet bright in the memory of many of the present residents. Sometime along in '73 Parson Heritt, a long, lanky, firey-haired exhorter of the Methodist persuasion...

By John Warren Hunter
Lengthy and detailed account of Judge Fleutsch, native of Switzerland, and his activities at Fort McKavett. Judge Fleutsch was a fiery, colorful and determined man, who meted out justice according to his colorful mannerism as the following quote makes clear: Two years later, this same Mexican was arrested and arraigned before Judge Fleutsch on a charge of rape, the alleged victim being a 14-year-old girl of his own nationality. The proof as to his guilt was positive, convincing and in rendering his verdict the judge reasoned thus: " Dees vas an awful crime und I makes you de highest penalty vit de law. You makes some troubles vit dees court 'altreaty before. Because you vas a great big thief, one time I sends you to de benitentiary und you esgape und get avay und hide in de brush. If I sends you to de shail or to de pen now, you break oudt und run off agin. So I fix you right now altready, Shorge Niel, dees vas de order of deeg court, you takes dees man down by de crafeyard und shoot heem, und may de Lawd haf mercy vit your soul." With drawn pistol George collared the trembling Mexican and started him to the place of execution, fully intent on carrying out the…

The Killing of Sam Bass

"Since the death of ex-United States Marshal R. C. Ware I have seen numerous accounts of the capture and death of that. chief of train robbers, Sam Bass. As those are mostly . far from correct, being written by parties not acquainted with the facts, I, as an ex-ranger of Company E, frontier battalion, who was present at the capture and death of Bass, feel disposed to give to your many readers what I think to be true report of this memorable fight.

Staged a Tragedy in San Antonio

All old time printers and telegraphers of the 80's remember "Peg," for he was a remarkable character, never to be forgotten. "Peg" sets the "stage" and the whole things backfires –

Some Names in this volume: