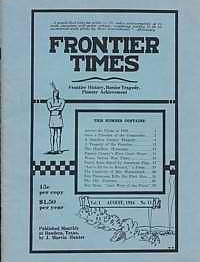 Uncle Larry Gooding, well known in printing and newspaper circles in North Texas in the early days, claims to have been the first white child among the Choctaw and Chickasaw Indians after they were brought to Indian Territory from Mississippi, and talks interestingly of life in this country in that early day. The account of few of his many remarkable experiences are more interesting than his narration of the trip he made overland from Fort Smith Ark., to Santa Fe in 1849. – this is the story of that journey he made when he was but 18 years old. This is fascinating reading, from an eye-witness perspective.

Once a Prisoner of the Comanches.

Captured by the fierce Comanche Indians at the age of 10 years, carried away into captivity, forced to see her own sister stabbed by the redmen. and thrown aside to die, fed upon horse flesh and nuts and then to be rescued and still alive to tell the tale, such is the history of Mrs. Sarah Strauch, 83, of Refugio, Texas. Mrs. Sarah Strauch was born in Switzerland in 1841. She came to this country with her parents, Jacob and Elizabeth Thomas and their five children, in 1844, landing at New Orleans. Then they journey overland to Galveston. Thomas walked from there to Corpus Christi, the family following in a sail boat. After one year in Corpus Christi the family removed to St. Joseph's Island and, five years later, to Salt Creek where they made a permanent home.

It was here that Sarah, then about 10 years old, was taken captive by a band of Comanche Indians raiding cattle ranches in Texas.

During the days of the, Civil War, Bandera County was the scene of several tragedies, the most prominent of which was the execution of eight men one night in the summer of 1863, on Julian Creek, four miles east of this town. This account is from information provided by three witnesses (including the venerable George Hay) of the event, who also assisted in giving the victims a decent burial.

A Tragedy of the Frontier.

Major W. M. Green, Meridian, Texas. Account of a the sad tragedy of a family that was brutally murdered by savage Indians at their homestead on the Clear Fork of the Brazos, (Now Eastland co) August, 1874.

Account describes a true incident that occurred in Southwest TX which may have given rise to Capt. Mayne Reid’s famous story. Gives good background of Reid himself, and the events which paralleled the great story. This in substance, is the story related by Captain Creed Taylor who came to Texas with his father, Joseph Taylor, in 1820. He fought at Gonzales, October 2, 1835. at Conception with Bowie, at San Antonio under Ben Milam, at San Jacinto, and later under Jack Hayes. He died at a great age, at his ranch home in Kimble county, Texas. December 29, 1906. He was not given to boasting or exaggeration; he was not a reading man, in truth, he was illiterate, and when asked if he knew that Captain Mayne Reid had written a novel based upon the fact concerning the story he had just related, he declared that he had never heard of Reid's novel, but that he remembered Rid, one of the regulars who was stationed at Fort Inge, but had no acquaintance with him, and never knew he had written a book of any kind. Further Mentions: the storming of Chapultepec, Ben Milaw and the storming party into San Antonio, December 5, 1835, a Mexican lieutenant by the name of Vivois who deserted General Cos' army and made his way into the Texas Lines, Creed Taylor, then a young soldier under Frank Johnson, Bigfoot Wallace, the band on the Nueces about twelve miles below Fort Inge

Account of the actual original Fannin co courthouse located at Old Warren, 15 miles northwest of Bonham erected in 1839. Mentions: The builder is said to have been named Dugan. His great granddaughter resides in, Bonham. It was abandoned as the county seat in 1842, The first officials of Fannin County were: John G. Jonatt, chief justice: James R. O'Neal, president of the board; Joseph Swaggarty and Thomas Lindsey. Simpson City Park

Shooting scrapes were as frequent as auto accidents are now, and judged with greater leniency. Highwaymen held sway with less fear than does the present offender of traffic signals. Legal hangings were, then unknown, but there were illegal ones a plenty. Hangman's Tree from which three men were hung in one night, until recently continued to shade the corner of Sixth Street and Herring Avenue. It was an honored tree of trees, the supreme court, judge, jury and all in those days. Its sentence was never appealed. Not only one's actions, but one's words were necessarily guarded, or the offender might pay in eternal silence. Such was Waco in early days. This brief story gives information of even earlier days, of original settlements, etc.

Further Mentions: Major William Wood Downs, It was the home of the Earles, Gurleys, Harrisons, Forts, Downs, Wilsons and Taylors, most of whom traveled together from Alabama to Texas in ox drawn wagons. J. W. Downs, was editor of The Waco Examiner, a pioneer paper.

Major John R. Kenly, of the Maryland Volunteers, in his "Memoirs of the Mexican War," relates a very interesting incident, yet very embarrassing to one of the parties-Santa Anna. What happens when the pompous Mexican General suddenly finds himself face to face with the venerable Colonel Jack Hays? And surrounded by his soldiers? This is an interesting account. Reveals the honor and nobility of the Texans before the Mexican butcher.

Further Mentions: Commodore Connor, in charge of the blockade squadron at the beginning of the war between the United States and Mexico, Major Kenly, Colonel Hughes, the Queretaro government, the Perote road six miles, to the village of San Miguel, General Duran, Sergeant David G. Murray of Tilgham's battery and Sergeant William U Stewart of the Twigg's Rifles

LET'S ALL GO TO MENARD.

I'm saddlin' my old paint hoss,
Got My blankets on the packmule tight,
I'll trail out through the mesquites
I'm off for Menard all right;
Where the old Rangers will gather
From the Rio Grande an' miles aroun',
I'll meet and greet the old boys,
There in that quaint Menard town, etc, etc

The Captivity of Mrs. Charles Wattenbach.

Mrs Charles Wattenbach of Alason, Texas, whose father was Peter Metzger who came from Nasseau, Germany, in an early day, and settled on Palo Alto creek in Gillespie county. This noble woman speaks in her own words, of the dreadful event of her capture by Kiowas in 1864 near "Krenz Berg", a mountain near Fredricksburg.

An excerpt: "My sister was stronger than I, and succeeded in getting loose from her captors several times. Three times she jumped from the horse upon which she had been placed. She declared that she would not go with the Indians. The last time she leaped from the horse she fell upon her knees and began to pray. While thus engaged the Indians pierced her with arrows and she fell upon the turf, moaned. and expired. The Indians then, scalped her, deprived her of her clothing, mutilated her body in other ways and left her lying upon the cold snow. This was her condition when found and taken up by her parents, and friends of the neighborhood. This terrible butchery was done right in my presence. I saw my sister's ghastly look as she fell to the ground. It was one of horror mixed with pleading. That look I shall never forget. Indelibly was it pressed upon my memory, and I can plainly see it today.

After some such maneuvering as I have just described, a stake about, four feet in length was brought and driven into the ground. Upon the top of this was placed the bloody scalp of my sister Emma. The brown locks that which lay SO loose and wavy were now matted together with crimson clots, and presented a most horrible appearance. Around this the warriors danced, shrieked and yelled most hideously, waving the gory garments my sister wore at the time of her tragic death.

While all this was going on the, squaws and younger Indians were taking turns in beating me and lacerating my flesh in a manner most distressing..."

This is the account of Thompson’s experience as a lawman in Austin and his notorious first battle. His demeanor and fearlessness set the tenor for his subsequent mannerisms in similar gunfights

The Old Frontier and Events of Long Ago.

Mentions various reasons for increasing hostilities among Indians, especially Comanches and Kiowas in Palo Pinto, Erath and Brown counties during late 1850’s and 60’s. Then details an unusually brutal event that occurred in Brown county in 1873, regarding the horrific slaughter of Mrs Williams her infant and the capture and subsequent slaying of their 10 year old daughter.

Roy Bean, the "Law West of the Pecos."

"Roy Bean, justice of the peace. Law west of the Pecos." To the world in general and Texas in particular, Roy Bean, "J. P.;" was the originator of the bit of legal lore which held it no crime to kill a Chinaman in Texas, and the equally famous decision by which he confiscated the gun and $20 gold from the body of a deceased Texan on the pretext of a fine of $20 for carrying concealed weapons assessed against the deceased. These two frontier tales are Roy Bean’s only bid to fame. To speak of Roy Bean is to hear for the 100th time these well worn stories of his legal decisions. Of Roy Bean, "the man of the hour in west Texas" in the pioneer days, practically nothing has been written and less known. Judge T. A. Falvey, of El Paso, was an associate of the old Langtry justice in the days when he was, in reality, all the law west of the Pecos. As district judge in the district which included El Paso, Fort Stockton, Del Rio and enough other real property to cover half of the New England states and slosh over into New York; Judge Falvey met and knew Judge Bean as a brother barrister and as a close friend. Judge Falvey had an opportunity to study the man and his work at close range.

The two stories upon which the fame of the odd old character by the Pecos high bridge rested, were only samples of what occurred daily when court was in session in the rear room of the Bean general store, saloon, post office and courthouse.

How Bean came into possession of that country immediately adjacent to the Pecos river on the west, no one knows. That he was in full possession there was no doubt. His sign was no mere brag - It was a fact as firmly established in the ninds of the Langtryites and in the habitants of Vinegaroon near the painted cave. Roy Bean was the law west of the Peeo, as more than one offender discovered to his extreme and intense sorrow. The account goes on to further evaluate Bean’s practice of Law, as seen through the eyes of judge Falvey.

Further Mentions: "Doc" Johnson was acting as clerk and legal advisor to his honor the justice, etc

Some Names in this volume: