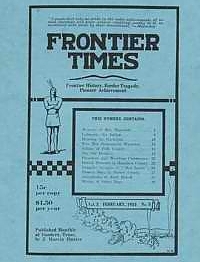 Information and details on the forthcoming book about Herman Lehman, a white man who spent nine years among the Apaches and Comanches.

This article begins, Gachupin sounds like a prehistoric or extinct species of animal, doesn’t it? But no, it is merely a strange word I have found in an old volume of Texas literature. Find out what the gachupin is in this interesting article.

Mrs. Frye is daughter of W. J. Bill Miller, and this is her narrative of his experience along with partner A. W. Morrow. Events in and around McCulloch Co. and Llano Co. Returning from cattle drive to Missouri, the two are caught in desperate fight with Indians…this is their terrifying account.

Speaks of remnant tribe of Indians Alabama Indians, a minor tribe of about 30 families still residing in Polk Co. (as of 1924). These were an unusually industrious and prosperous tribe, being good stewards of timber holdings, agricultural lands and commodities on their 1200 acre reservation. This is their account. Further details on the killing of Bob Lee in Fannin Co. (or did it occur elsewhere???)

The Old Frontier: Events of long ago

Story gives remarkable, detailed and historically accurate account of life of Mr. And Mrs E. B. (Dick) Dennis, one of the most courageous and fierce of all Indian fighters.

Interesting and colorful account of a veteran frontier preacher (30 years) and the experiences he had performing wedding ceremonies on the Texas frontier during that time.

Gold was secreted in Hamilton Co. by Jesuits in 1832. Many have sought for its location. Tells of the Langford gang on the Llano and Lampasas Rivers, Gholson’s Gap – Where is the treasure? Maybe this account is true???

Nomadic Navahos in the Bad Lands

Speaks of the Rainbow Bridge country, Navaho Mountain and the treks of Mr Charles L. Bernheimer into the area and his account of the indians who inhabited that region.

Account of one of the earliest settlers in Burnet Co., Samuel E. Holland, born Dec. 6, 1826, settling near Austin, engaged in Battles of Mexican War near Buena Vista, then came to Burnet Co, and Fort Croghan, purchased 1280 Acres in Hamilton Valley, fought Indians in Llano, Blanco, Gillespie Mason counties, was first Treasurer-Clerk of county, then elected to Legislature….lost $70,000 to carpetbaggers after the War, purchased Mormon Hill, tells of desperate and bloody Indian raid near Hairston Creek… many more interesting facts and details of the very earliest pioneer history of the region.

4th installment (we have all others available – just ask) in series on life of Captain Dobell and his company of Kentucky riflemen in Mexican War. Speaks of battle at Coleto, Col. Fannin, Gen Urrea, events around Goliad.