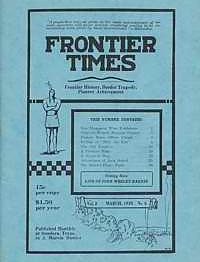 It was said of the notorious desperado Ben Thompson, "to offend him was to invite extermination". Probably had more killings to his credit than any man in Texas. Activities around Austin, feud with newspaper man, Col. Cardwell. Gambles in card game and wins a marble tombstone, but is buried in an unmarked grave – this is his story.

Killing of Billy the Kid

The True and detailed story of his Death as related by John W. Poe to E. A. Brininstool in 1919. (Includes photo from old tintype of Billy the Kid taken shortly before his death). Speaks of Pat Garrett, (also has photo) sheriff of Lincoln Co, where Billy was in jail. Billy escapes just a few days before he was to be executed. Garrett hunts and pursues the Kid and finds him in Fort Sumner and the events surrounding his death on July 14, 1881 are described in great detail from eye-witness view.

The Old Frontier; Events Of Long Ago

By W. K. Baylor: "THAT RED-HEADED MAN", account of white man who joined in with Comanche Indians (he was "red on the inside"). Account describes this man’s pillaging and blood-shedding along with other scoundrels and Comanches. Speaks of Jack Co and massacres of McKinney family, Mason and Camerons, and brutal killing of Collins. Who was this vicious creature?

The Faithful Dog On The Frontier

I.D. Ferguson. Fort Belknap and events in 1864– wilderness of the far West at that time. Speaks of the town of Elm Creek where lived a certain George Bragg. His friend Dock Wilson is attacked by Indians at his front door which led to brutal fight. Indians (800-1000 or so) then went for Mrs. Fitzpatrick’s where loyal dog fiercely sought to withstand the marauders but was found later with 15 arrows – a sign of his valor and courage. Indians proceeded to annihilate in brutal fashion – account is very sad.

5th Installment (we have the others – just ask) – J. C. Duval. More on events of Mexican war around Coletto, Goliad…of Col. Fannin, Holliday and the daring & incredible escape of Wm. Hunter. Gripping story.