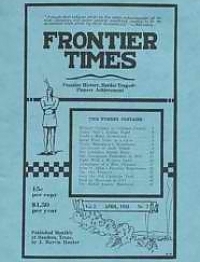 Camp Colorado, near Jim Ned Creek. Est. August 1856. From here would come some of the most noted Civil War heroes such as, Maj. Earl Van Dorn, Capt. Theodore O’Hara, Gen. John B. Hood, Gen. James P. Major, Gen. E. Kirby Smith and Gen. Fitzhugh Lee. Van Dorn led against outbreak of Mormon trouble in 1857. Capt. L. S. Ross. Speaks of various military organizations that were stationed at Camp Colorado, and the dates of their residence there.

T. U. Taylor. Sisk, of Parker Co. is attacked by 4 shielded Indians, shoots Chief and escapes to tell tale which became legendary in Parker Co. Later meets man who relates story to Sisk, not knowing who he was and the account is affirmed by the words: "The description you have given …is correct in every detail: I am Henry Sisk!"

Speaks of stone collector, W. E. Snavely of Taylor who finds an arrowhead of ruby weighing over 15 Karats! This is his story.

Cave above the floor of the Blanco River canyon is inhabited by Jap Brown who flees conscription into the Civil War and "Heel Flies." He is cared for during entire time by….

Short article on pure silver bullion that was seen and then lost sight of somewhere on Lavaca River.

33rd degree Mason from France becomes one of earliest settlers in Texas. Long time resident of Nacogdoches. This is account of his life by C. A. Sterne, his son.

Origins of "National Intelligencer" published in Houston, Aug 22, 1839, by S. Whiting, publisher. Gives some of the interesting articles, places, facts and advertisements that appeared in that early issue.

Leonard Passmore, when 16 has incredible confrontation with enormous Mex. lynx.

Thrilling account of John Rufus Alexander, a member of the ill-fated expedition into Mexico. This sad story depicts the courageous conflict under Gen. Tom Green and Col. Fisher whose men met a horrible fate at Mier. After remaining there for a period they were escorted by Mexican forces deep into Mexico where they met the scorn and ridicule of the Mexican citizens and were subject to the most horrific depravations, their daring escape and desperate journey back home to Texas. This is absolutely fascinating reading, very detailed and lengthy. Very engaging, very sad reading.

Some of my Frontier Experiences

The Old Frontier: Events of Long Ago: The Paint Creek Fight

Speaks of terrible indian attack at Browning Ranch on Hubbard Creek – Josephus was scalped while still alive, and then left for dead. Pursuit of indians taken up by John R. Baylor at Dawson Ranch on Clear Fork. Then joined by Elias Hale, Min. Wright and Tom Stockton. Then along with Geo. Baylor and 2 others, they engaged in fierce battles showing great courage and the Paint Creek Fight was considered to be one of the most successful efforts against the Comanches on the northern frontier of Texas.

Over the Old Chisholm Trail

Morris, along with James Holden began at Buda, Hays, co. 15 mi. south of Austin to take 6000 head of cattle to Nebraska. Drivers Ocie Cato and James Kingsbury. Describes the "outfit" of 15 men and their various duties along the drive. Describes fascinating details of life on the trail as it passed the regions of Throckmorton, Baylor and Wilbarger counties, crossing Red River at Doan’s Store, through Washita Mountains. Met up with Quanah Parker, half-breed and his men, then into territories of the Kiowa and chief Lone Wolf. Wolf, demands beef, but is refused to which he responds with 50 warriors on horseback. Account further depicts efforts to avoid stampede, river crossings, "grub piles" etc. A must read if Chisholm or cattle-driving history is your thing.

Speaks of lawless days in region between Victoria and Brownsville and the sufferings endured by Corpus Christi residence at the hands of blood-thirsty Mexicans. Account of particular raid in 1875 where 50 were taken captive and a detailed account by Thomas Noakes as found in his diary. Depicts the horrible events and details surrounding the attack.

Boerne, Texas, Aug. 30 1868 a fiendish and brutal murder of Mr. Bickel, Miss Bickel, Mr. Spangenberg and a three year old child by marauding Mexicans. All have throats slashed, but one boy escapes to tell tale to Mr. Zoeller. This is the true account.