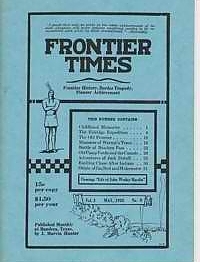 Tells of grandfather, R. R. Royall who landed at Matagorda and became influential in TX politics and business – friend of Stephen Austin. Mrs. Scott describes terrors of fleeing marauding Mexicans, courage of Capt. James Long and his wife, which helped spark Texans rebellion against Mexican gov’t leading to TX independence. Further accounts of father, Col. M. W. Allen and his exploits. Mentions acts of Ku Klux Klan riders and other formative events of which she was eye-witness.

The Eldridge Expedition In 1843

John Henry Brown account of the expedition of Eldridge who along with Hamilton P. Bee, Thomas Torrey and others embarked on effort to settle Indian troubles. Passing up Brazos, Tehuacano Cr, and into the wilds beyond. At Wise, in Jack’s co., met with delegations of indians from Wacos, Anadarcos, Two-e-ashes, Caddos, Keechis, Tehuacano, Delawares, Bedais, Boluxies, Ionies and other tribes. Strange conduct of the indians at this council described. Further events described in detail regarding meetings with comanches and Wacos. Acts of Jim Shaw, John Conner and other indian attaches which resulted in monumental treaties.

The Massacre Of Henry Warren’s Train

Tells of the gruesome attack (1871) upon Warren’s mule-train by 150 Indians near Flat-Top Mountain halfway between Jacksboro and Belknap. Bodies were mutilated, chained to wagon-wheels and burned. Goes on to describe efforts made by Gen. Sherman to control increasing incursions of Indian hostility. Confrontation with chiefs Satanta and Kicking Bird. Generally successful efforts made to quiet uprisings, and subsequent arrest of numerous Indians, Satanta, Big Tree & Satank. Details of trials included as well as many, many names of important local officials at Jacksboro. Northern Sentimentalists were successful in gaining freedom for the Chiefs, and so they were set at liberty. As expected, terror began afresh and they were re-captured and imprisoned only to…

The Battle Of Bandera Pass

Old Camp Verde And The Camels

A. J. Sowell. Camp Verde, a "camel post" – camels being Jeff Davis’ idea and so fort was built. Tells of efforts and failure of camels on frontier. Subsequent history of Camp Verde.

7th installment (we have the others – just ask) More on events of Mexican war around Coletto, Goliad…of Col. Fannin, Holliday and the daring & incredible escape of Wm. Hunter. Gripping story.

Exciting Chase After A Band Of Indians

Origin Of Jim Ned And Mukewater

Jim Ned was Kiowa half-breed cheiftan, hence name of creek after him. Little town of Mukwater on line between Coleman and Brown counties named after...