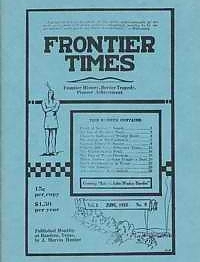 Fight With Indians At Loving’s Ranch

Great eye-witness account (that’s what’s so great about the Hunter’s Frontier Times – where ya ever gonna get first-hand stuff like this?) of two companies of Rangers who are attacked at Loving’s Ranch on west side of Cameron Creek on the 8th or 10th of July, 1874.

An Inn Of Frontier Days

Esther Meuller, Fredricksburg, TX. Speaks of the old Nimitz Hotel in Fredricksburg which was the scene of numerous historical events and has registry record of many notable guests such as Gen R. E. Lee, Gen. Longstreet, Gen. E. Kirby Smith, gen Phil Sheridan. Certain relics pertaining to Lee are yet in the hotel.

W. Richardson. Speaks of 400 or so Indians of Creek tribe who pursue life of industry and peacefulness in the heart of hostile indian territory. Sub-tribes and dialects include Coashattas, Alabamas, Muscogees. Describes their industrious agricultural and livestock pursuits as well as peaceful lifestyle. Further, writer goes on to describe detailed account of certain intricacies of their native culture such as... Finally their tremendous downfall is their...

The Scrap At Nick Coalson’s

Mrs Lou C. Roberts. Speaks of the bravery of a wife and mother who saved herself and her family from being murdered by Indians. Copperas Creek in Kimble Co., 1868 is the scene. Her bravery and level-headedness in the midst of terrifying attack is seen when she...

Mrs C. A. Westbrook. Brown family immigrated to Maryland, then Ohio, Kentucky, Missouri and eventually to TX. This article has an amazing wealth of genealogical data, of ancestry, and names/places/dates. Rich wealth of info if you are researching earlier events/names/places of TX history (1815-33 especially and unto his death in 1855). A truly great hero, even for the greatness of Texas, this man is of immeasurable prominence.

Speaks of Frank Heubner, pioneer Texan and Ranger, who due to an intersting eries of circumstances receives last paycheck from state for services rendered in Feb, 1873. Describes some of Heubner’s experiences as Ranger including fierce skirmish with Mexicans on the King ranch while investigating a murder.

By DeWitt Reddick, in The Longhorn Magazine.

(Editor's Note.-Tennessee and Kentucky are renowned for their feuds, yet Texas, during the riotous days of its earl- life was the scene of family and clan conflicts just as bitter and deadly as those of the Blue Ridge ranges. In South and West Texas old cattlemen still glory in; the telling of tales of the worst of these conflicts, one in which two old and influential families, the Taylors and the Suttons, were arrayed against each other with the settlers in a major portion of the states siding actively with one or the other of the . actions The following article is an ac count of this feud, taken from historical data compiled in the Texas Collection of the University Library). This is a riveting account of those hostilities.

The Day Of Texas Freedom

The failures of the Mexican gov’t to govern and rule Texas created pressure for early Texas pioneers and patriots to seek freedom. Battle of San Jacinto was decisive.

When Andrew Jackson Fought A Duel

Andrew Jackson was born March 15, 1767. This article is an account of one of the most dramatic episodes of Old Hickory's life, and it is told in the light of newly discovered documents that are now in the archives of his home state of - Tennessee. The author, Trotwood Moore, is librarian and archivist of the Tennessee department -of education. Speaks of duel between Jackson and Dickinson at Harrison’s Mill, on Red River in Logan Co. Kentucky. Jackson receives bullet and though badly wounded, raises his pistol and...

The Old Frontier: Events From Long Ago

From the article: "I wish now to record one of the best Indian fights ever fought on our northern frontier by citizens against Indians. This fight like the major part of our frontier life and battles with Indians, has never been recorded in history, but by all means ought to have been. The fight was by Rev. Pleasant Tackitt and his three young sons. Jim Tackitt, twenty-two years old, L. L.- Tackitt, twenty, and George Tackitt, sixteen. Rev. Tackitt was armed with a rifle and dragoon six-shooter; Jim Tackitt had a rifle and Navy six-shooter and L. L. Tackitt had a double-barreled shot gun and Navy six shooter. The first Indian raid into Young county after they were moved to the Indian territory was in January 1860. On the evening of January 13th one of the Tackitt's milk cows came home with an arrow sticking in her back. Mrs. Tackitt, after discovering the arrow when she went to milk, went to the house and reported the fact. It was then late in, the evening. Rev. Tackitt and the three older boys above named made ready to start the next morning on foot to see if they could find the Indians and also learn what they had done with other stock. There had been a deep snow and sleet on the ground for a week or ten days. The Tackitts then lived on Fish Creek in Young county. Early on the morning of the 14th about sun-rise, the Rev' Tackitt and the three boys left home in pursuit of the Indians; they took the back trail of the cows and after having gone some two miles they came to where the Indians had killed one of their cows and had... He and George both rain to the trees and in suddenly stopping behind the trees they both slipped on the snow and fell. Jim and Rev. Tackitt by this time were slightly wounded. The Indians seeing L. L. and George fall when they ran to the trees evidently thought they were killed and instantly dropped their bows and arrows in the branch and made a sudden rush...