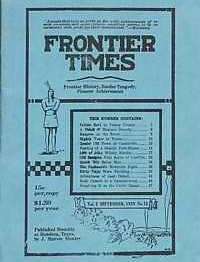 Lengthy and detailed account given by eye-witness Mr. Walter F. Robinson. The terrible Comanche raid occurred in 1864 down the valley of Elm Creek, near Fort Belknap, Young Co. Fort Murray became the place of refuge for 25 unprotected families who faced the onslaught of a few hundred Indians. Here is an interesting excerpt from the account: Immediately after the arrival of Wilson, the Indians being reinforced by the main body, closed in, around the house and the battle became exceedingly furious. Mrs. Bragg, greatly against her will was made to seek shelter with her children under a bed, that they might escape the flying missiles sent through the cracks of the picket house. Old man Hamby, while "clearing the deck" for freer action, seized the spinning wheel and was: in, the act of throwing it out, seeing which Mts. Bragg sprang from under the 'bed and gave him a piece of her mind. "Put that wheel down, and ‘if you lay hands on it again I'll make you think the Injuns have done got you! And look at them rolls: you've already just about ruint them! " This was the brave woman's warning to one of her defenders delivered while the arrows were flying thick and fast around her, but in those days the loss of the spinning wheel ~ and the carded woolen rolls meant scant clothing if not entire nudity for the family. Above the storm of battle Mr. Hamby shouted back: "In the name of heaven, woman, get back under that bed; you may never have need of a spinning wheel again!" But she made him agree to leave that wheel alone before she consented to take her place under the bed. The fight continued with savage fury, the Indians closing in around the house and shooting through every crack and cranny. A bullet struck Wilson squarely in the forehead and he fell dead. An arrow struck old man Bragg in the breast and he rolled over, as he believed, with a fatal wound. A large Indian, supposed to be the chief, seized a mattock that was lying in the yard and getting close up under the wall set about to...

A Drink Of Mexican Brandy

Story of Amasa Clark during Mexican War, who, under Gen. Scott, had an amazing experience while undertaking his first shot of Mexican brandy. It was not the brandy that resulted in this amazing occurrence wherein the entire city seemed suddenly to be in an uproar, but rather one of those terrifying events that are almost commonplace in that part of the world, a tremendous ...

Capt. Moore’s Rangers on the Scout

Account presents sample of life on the scout trail

An excerpt: In the early 70's while Captain Moore's company of rangers were camped on Bear Creek, twenty - miles from Junction City on the Fort McKavett road, a runner came and notified us of the killing of Mr. Kountz and two girls in the edge of the town of Junction.. The Messenger arrived at our camp about 11:00 o’clock at night, and Captain Moore immediately detailed twenty-five men to go with him on the trail. I was-one of the number. It was a cold, cloudy night, but Texas rangers never stood back on, account of the weather. We reached Junction City at daybreak the next morning, found the trail of the Indians, and followed it some distance, wherein it seemed to get dim, Captain Moore selected Talt Lane, Mart Fannin And Jerry Roberts as trailers, and we pushed on as fast as possible. We followed the Indians from Monday morning until Thursday morning before we could find sufficient sign to enable us to make any headway towards overtaking them. While we were standing still resting our horses. for a few minutes we saw Mart, (Bud) Fannin throw, up his hat and motion us to come on. When the command came up to him we found a dead horse which the Indians had killed for food. From there on, the trail was not difficult to follow, and it led us to a high mountain ridge and down into a canyon. In this canyon we found a fire on which some meat was roasting. This meat looked very tempting to our party of hungry rangers, our rations being hard tack,, bacon and, black coffee twice daily, but Captain Moore decided it was "bait" put by the Indians purposely for us, and cautioned us to leave it alone which we did. A pool of water was close by on which ice, was two inches thick, and in places this ice was broken showing that the redskins had but recently replenished their water supply. From there on the trail could be followed more rapidly for about two miles. We left this canyon which was one of the draws of Little Devil's River, which emptied. into. the Llano River. . We reached a ridge which was so rough our trailers could not pick up the trail...

Account of the life of Mrs. Mary Morton Bumpas (Aunt "Mort"), born 1837 in Kentucky, came to Dallas area 1845 with family. Soon family purchased land in what became known as Kessler Park. Speaks of many incidents of early life as pioneer, such as crossing the Trinity River after a major storm... wild bears, survival and of course, interaction with Indians

Brief but very interesting account of how he got the title, "Bigfoot"

The Quaint Old Town Of Castroville

By Samuel E. Gideon. Named after Henri de Castro, the account details the origin of this French town on the banks of the Medina R. Included are many very interesting details, names and events associated with the forming of the community.

The Passing Of A Sturdy Path Blazer

Speaks of the life of William E. Cureton of Bosque Co., and Palo Pinto Co. a few miles W of Denison. Later (1850’s) settled on Keechi Creek and built the first houses in that area. Speaks of first School in Palo Pinto Co. Refers to original organizing of the County. Mentions the famous capture of Cynthia Ann Parker by Comanches. Abilene, Jeff Lyttle, Peta Nacona, the famous Indian battle of Dove Creek and cattle drives to Kansas.

The Life Of John Wesley Hardin

"The old place hasn’t changed much. It looks about the same as it did on that day," observed Captain Dan W. Roberts on his first visit to the scene of the famous Deer Creek Indian fight...

Murder Of The Porter Family

The Adventures Of Jack Dobell From "Early Times In Texas"

Rode Camels To A Camp Meeting

Rev. H. G. Horton, Bishop, Texas. Uvalde mission, 0. B. Adams, Center Point Circuit.. Jasper K. Harper, Camp Verde and Turkey Creek, John Wesley DeVilbiss, Jasper K. Harper and H. G. Horton.. An excerpt: A campmeeting, away out there in the woods, was a novelty. DeVilbiss was picking out his hymn to commence on that beautiful , Sunday morning, when the congregation suddenly - saw six camels coming right -up the. dim path to the arbor,. and on the back of each camel sat a woman and two or three children. The whole crowd arose and hurried out to meet them. . We helped them all down and the drivers hitched the camels close around, and there they stood during services and listened to DeVilbiss preach as solemnly as though the day of judgment was, at hand. The women and children remained. and took dinner with us, then sang some hymns for us before they mounted their camels and returned to Camp Verde...One time, as' I was coming east through a strip of woods just west of Castroville, I met fifty of those camels passing on up towards New Mexico, loaded with government supplies. My horse was so badly scared he tried his best to climb a tree...

Roughing it on the cattle range

Hunter. Personal account of Mr. Hunter who in 1862 was left with one other man (the men of the area having been called off to war) to herd 1000 head of cattle in the regions of Uvalde Co. , Clinton on Coletto Cr. Leon Creek, Yorktown. Mentions O. D. Fleming, Butch Dillard, John Fleming, Miss Martha Fleming.