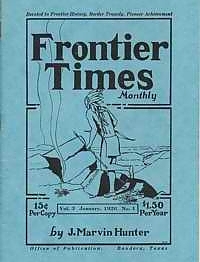 Account of a young man named Saunders who settled in Erath county. While on a visit to a lady friend, he was accosted by 20 mounted Indians. His daring and resourcefulness resulted in this amazing tale of how he escaped certain death.

By Charles Morris of Kerrville. Account of sad tale of Gillespie county settlers, the Fischers, who had a boy who was abducted by Indians in 1868. After a number of years, the boy was rescued and returned to his loving family, but things had changed. The boy was unsettled back in the world of the white man and soon returned to the tribe, to be reunited with his indian wife, kids and tribe. This is his amazing story.

Further Mentions: The Morris Ranch, his brother Otto of Fredericksburg

Article details adventures of frontier Sheriff Ira L Wheat of Edwards county and former ranger, Henry Putz. The two had very notable frontier events to recall. This is account of some of their experiences in Montell, Medina, Uvalde, Edwards, McLaurin and Coalson counties.

Knew the San Antonio of Old

How San Antonio looked and lived in the days of earliest white settlers, as told by Mrs. H Lucas, whose grandmother: was one of the first seven white women to live in the little outpost of civilization, and her grandfather and his partner owned, the rock quarry that is now the famous Japanese sunken garden in Breckenridge Park. They opened up the quarry and used the stone to build the first dwellings of stone with shingled roofs in the city. These stone houses were the first ones to be built of anything but adobe.

Further Mentions: "My grandparents came from England here in 1836 or 1838", a small town near Victoria, probably Linnville, when they were attacked by Indians who were having a war dance over the burning of Linnville, Market street., Main Plaza, Even, at this date Military Plaza was our market place, "There were the carretas of long wood, two-wheeled carts drawn by a yoke of oxen Donkeys with short wood piled high on their backs were here and there. You had your choice of wood for, the price you chose to pay. Dotted about were a few ears of corn and some peppers perhaps…" recollections of the First railroad into San Antonio and the days of the Civil War, The Alazan and the San Pedro' creeks, Later we lived at the corner of Commerce and North Flores streets., I remember the dreadful epidemic of cholera. which followed the end of 'the war in 1865. People died on the streets, many from fear. So fast did they die and so many, that there were no men to make the coffins…" "There were some quite good stores, Grenet, Schleuning, Wolfson, Haus, Oppenheimer, Dulling and others. In 1873 a small store opened its doors on the Austin road, where the S. P. roundhouse now is."

Captain Neal Coldwell. was born in Dade county, Missouri, May 21, 1844, and died at his home near Center Point, Texas, November 1, 1925. His father, Thomas Coldwell, was a soldier under General Jackson in the War of 1812, and participated in the famous battle of New Orleans...

Simpson N. Tidwell, 83, who died November 5th, at the home of his son, Lee Tidwell, 2301 Lipscomb Street, Ft. Worth, was a Confederate veteran, and had been a resident of Texas for 77 years. He was a native of Mississippi, but came to Bowie county in a covered wagon with his parents in 1848. After his father's death Tidwell continued farming the homestead, which is located eight miles north of Maude. He retired a few years ago, following the death of his wife, and went, to live with his Fort Worth son. Tidwell joined the Confederacy when, only 17 years old. He saw five years of service, serving in turn under Generals Sidney Johnson, Joseph E. Johnson and James B. Hood. Tidwell had been a member of the Sand Hill Baptist Church at Sims for 54 years at the time of his death. Besides Lee Tidwell, the deceased is survived, by two other sons, Clarence Tidwell, Fort Worth, and Jim Tidwell, New Boston; and three daughters, 'Mrs. M. F. Hale, Goliad, and Mrs. 0. H. Jackson and Miss Lena Tidwell Clarendon.

Excellent history the great frontiersman and his travels.

Tom M Stevens of Bandera, who joined Captain Jack Phillips Minute company in 1873. This minute company was organized for protection against the Indians, and to put a stop to the cattle, and horse stealing which had become very common in this part of the country; the stealing being done by thieves who drifted in from other sections of the state.

Brief account of W. W. Sloan, 80, pioneer Texan and resident of San, Antonio for 32 years. He was a native of Carthage, Tenn., and came to Texas with his parents in 1850 when, five years old, and lived first at Indianola. He was married to Mary Frances Smith of Mississippi in 186S. After joining the 33rd Texas, Cavalry in 1863, he Nerved through the remainder of the Civil War. After holding the office of mayor, magistrate and public weigher for several years…

State Troops of the Frontier Report

Soldiering on the Frontier

By George Raper who enlisted under L M O'Brien, and tells of adventures while on duty in frontier of New Mexico.

The Past and The Present