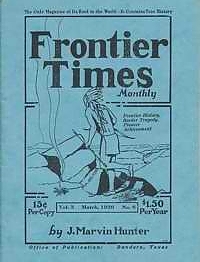 The Thermopylae of America

Accounts of how the name "alamo" came to be associated with the fort, the Front of the fort, bearing the date 1757, etc. Great early history of the immortal fort where so many heroes of the Republic perished.

Further Mentions: James Bowie, William B Travis, Includes the immortal letter, dispatched on February 24, upon the arrival of more troops, Santa Anna began the siege in earnest. It was on this same day that Col. Travis 'dispatched, a courier from the Alamo with one of the most heroic letters ever written by an American. and was addressed "to the people of Texas and all Americans in the world." It reads as follows: "Fellow citizens and compatriots -I am besieged by a thousand or more Mexicans under Santa Anna. I have sustained a continual bombardment and cannonade for 24 hours and have not lost a man. The enemy has demanded a surrender at discretion, otherwise, the garrison is to be put to the sword, if the fort is taken. I have answered the demand with a cannon shot, and our flag still waves proudly from the walls. I shall never surrender or retreat. Then, I call on you in the name of Liberty, of patriotism and everything dear to the American character, to come to our aid with all dispatch. The enemy is receiving reinforcements daily and. will no doubt..." The dauntless Americans resolved to sell their lives as dearly as possible. The chapel was the last point taken. Poor Bowie, confined to his bed with illness, was butchered with the others. But tradition says that he slew several of his assailants with his pistols. Travis near a cannon, with a single bullet in his forehead. David Crockett was also killed, but not until he had beaten down many a Mexican with the butt of his long-barrel Kentucky rifle. Lieut. Dickinson, carrying his little child, was seen to leap from a window in the chapel-both were immediately shot.

Seller’s note: I believe that the title for this article should have been "Origin of the Famous Alamo Phrase" which is the title of an article that is also included in this volume. The latter article should bear the title "The Thermopylae of America" – When you read the articles, you will see what I mean. Great historians aren’t always good managers!

Getting Married in Early Texas

Further Mentions: Bradshaw, Taylor Co Assoc, Old timers, Sawdie and Frony Hinard finally get hitched, the first court trial, John Creager, Prof. Hale, Capt. Simmons of Bluff Creek, A. O Brower Bar, Valley Creek, "The first mail over this country was delivered by horseback. The first route through here through Lemon Pass to Bell Plains by Baird to Fort Chadbourne. Then came the stage coach' and the sensational robberies…" Henry Wylie who drove in the first Durham Bull that was ever imported to this section, "One of the genuine amusements of the early Western life that has gone with the passing of the frontier was the exciting 'hoss races.' Every cowpuncher in this section, gathered at old Mount Moro. After drinking at A. O. Brower's bar, a fellow got keyed up for anything. Judges were selected and the ponies were breasted to the starting line. Then the betting began, and often everything that a cowpuncher had was lost before..."

Early settler in the region, J. G.Durrett tells of Dallas County. Mr Durrett, who was born, 1849, near Lancaster, Dallas County mentions: his father G W Durrett and C H Bernard who came from Kentucky to TX in 1847, The Postoffice for the settlers of that region was Pleasant Run a Mile this side of Lancaster. Tom Howell, Myron P Everts father of Arthur A Everts of Dallas, April 10, 1849, three years after Dallas county was organized, Ten-Mile Creek bottom was full of wild hogs.

Roped and Tamed an Indian

S Y L Balckstone 45 year Brown County resident, and known as The Cowboy Lawyer of Dallas, claimed that he was "the only living white man who ever roped, threw chained and tamed a wild Comanche warrior." The two became friends and met 15 years later for a cordial visit. This is the interesting account.

Story of venerable pioneer mother, Mrs. Arminta Ringer who offers this eye-witness account of the terrifying raid in 1866.

Battle With Indians on Devil’s River

Gen. John B Hood speaks first hand account of this battle which occurred July 19, 1857. Exciting story of indian pursuit and battle which followed. the Concho River.,

History of Sam Bass and His Gang

Very lengthy and detailed installment of Chapters 4 through 11 of the life of the legendary outlaw.

P. C. Baird, Menard, Texas, was scouting sergeant with a detachment of three men, namely, O D Baker, W W Baker and W A Mitchell and was commanded to investigate ourlawry, fence cutting and cattle rustling occurring at the G B and W J Greer ranch in Edwards County on the Llano River, July, 1884. By Special order of Gov John Ireland to Cap L P Sicker Commanding CO D Frontier Battalion, the unit was ordered to proceed under forced march to the ranch where following confrontation, the great fight occurred.

An Indian Shows His Gratitude

O T Word was raised on Caddo Creek in Hunt County. He tells of an amazing encounter with a captive Indian whom he was supposed to guard and put to death. Not having the inclination to kill the poor savage, he lets him loose and many years later the Indian returns with a gift of gratitude -–a nice fat dog, perfect for a good meal. Not having acquired a taste for dog, he declines the offer but thew Indian insists on presenting a gift, so he brings back his harem of 6 wives!

Further Mentions: Capt Buck Barry Indian Fighter who was commanded a company of Rangers in Bosque CO, the Tonkaways.

In 1863, George Swanser owned a little home on. Spring Creek, then within the borders of Uvalde county, where he cultivated a small farm and garden. He also had a small flock of sheep which, while engaged in his farm duties, was herded by Mrs. Swanser and one of their children. On. a certain day in the afore-mentioned year Mrs. Swanser, accompanied by her little son, Albert, a mere child eight years old, went with the flock as usual and some time during, the day found herself and child surrounded by a large party Indians, said to have been Kickapoos. These savages showed no disposition to commit murder, but seized the little boy and made off. With all love and instincts of a mother, Mrs. Swanser refused to give up her child without a desperate struggle. Unarmed, save with such Weapons as Nature had furnished her and with only sticks and rocks, she rushed upon the captors of her child with demoniac fury, attacking every Indian within her reach in her efforts to rescue her offspring. The Indians began their retreat, immediately after the capture of the boy and showed no disposition to do the lady bodily violence further than to repel her furious onslaughts. For six miles over a rough country the contest was kept up by this brave, pioneer mother, and it seems that after having reached the summit of a mountain, her persistency provoked the Indians to that degree of savage fury that they murdered her and left her body where it had. fallen. Failing to return. with the flock that evening, the husband made search for the missing wife and child and, discovering the Indian trail and the...

Origin of the Famous Alamo Phrase

Mentions the editorial written by TX newspaperman, Mr. Gail Borden, (who perfected condensed milk), which was siezed by Santa Anna as he progressed toward San Jacinto. It is a peculiar circumstance that the famous editorial about the Alamo, was nevertheless published by a New York editor. This story tells how that happened and about the great editorial itself, and the deisgnation of Alamo as "The Thermopylae of America"

Further Mentions: was first traversed by Cabeza de Vaca in 1535., Cabeza's crossing of the Pecos as near the mouth of the Live Oak Creek, Next came De Espejo in 1653. He gave the Pecos the name of "Rio de Vacas" on account of the many buffaloes, Mendoza traversed the Trans-Pecos country in 1683. He named the Pecos River the "Rio Salado" or Salt River., Comanche Springs, the present site of Fort Stockton., Bigfoot Wallace, the Texas Almanac of 1859, the San Antonio and San Diego Mail Line mentions Fort Lancaster and' Fort Davis of this section.

Ira D. Mullinax. Story of F L Campbell, regarded by live stock shippers to that market as one. of the best authorities on brands of cattle. Mentions some of his tactics and tricks to determine the authenticity of brand placed upon cattle to be shipped to market. He has thwarted many a rustlers hopes.

Further Mentions: the Texas and Southwestern Cattle Raisers' Association, Dodge City and Abeline, Kansas, the, old Chisolm trail, and other prairie routes' E. B. Spiller, at Fort Worth.

An Incident of the Lost Valley Fight

Texas Ranger, Jim McIntyre wrote this account of some interesting and extraordinary events associated with this great fight with Comanches and Kiowas.

An Excerpt: "We were hardened to rough life, and daily witnessed scenes that would make a 'tenderfoot's blood run cold; but to see Dave Bailey die by inches and eaten piece-meal by the blood-thirsty Comanches and Kiowas, made our hearts quail. We could see the blood running from their mouths as they munched the still quivering flesh. They would bat their eyes and lick their mouths after every mouthful. t The effect of these disgusting movements on us was but to increase our desire for revenge, and we often found it later on. After eating all the fleshy parts of our brave comrade, they left, him lying where they had cap…