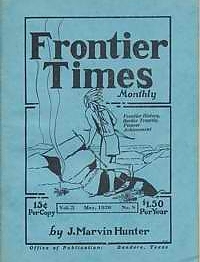 Mentions early colonization and settlement of the area around Bosque County by the Waco Indians, who had their capitol village at Waco Springs just west of the Brazos River, and the Tonkawas, also in Bosque county, but who had settled on the Leon River and its tributaries. These 2 tribes were quite a notable contrast to the fierce Kiowas and Comanches.

Adventures on the Cattle Trail

A Collett Sanders of Littlefield TX Sanders, who was born in Lavaca Co TX and reared in Gonzales County gives a brief account of his life as trail boss from the 1870's up to the end of the trail driving from TX to the Northern markets.

The Fort is described by Assistant Surgeon W M Notson, while he was stationed there. Good details, descriptions and early history of the Fort.

Further mentions:the North Concho, Fredericksburg, a German settlement upon the Perdenah's river, The nearest neighbors are the mail station, (Ben Ficklin) three miles, and the, Bismarck farm, seven miles. The nearest actual resident (Frank Tankersley) is 18 miles and his nearest neighbor 11 miles beyond him., Immense catfish, weighing as much As 75 pounds.

Some Recollections of Early Days

Mrs. Lulu Taylor of Canadian TX offers recollections of early days of TX. She came to TX in 1855 in a covered wagon with her parents living for awhile in Cooke County then on extreme border of civilization, later moved to Young county and lived there fifteen years. In 1869 she was married to J. W. Taylor, a Texas ranger, at Waco, and went to McClellan county where Mr. Taylor successfully engaged in the stock business.

Further mentions:the Russell Family who was massacred by indians 1868 just 15 miles from them, Mr. Taylor was engaged in a fight with Indians in Jack county in 1871, in what is now known as the Warren Train Indian fight, Mr. Hamilton, the Taylor ranch, the Loving ranch, Captain Tackett and Peter Holden, old Veal Station, where two famous old Indian fighters, were buried.. Charlie Rivers, Mr. Taylor died at. Gem, Texas, May 16, 1917. From Major Green.

Bigfoot takes pen in hand and describes in his unique and interesting way, this account of the battle with Indians on the Nueces in 1850 when he was in command of 20 Rangers attached to Col Hardee force on the Nueces River. Frontiersman/war hero Wallace is a great writer.

She was known to three generations as "Amy" and her acquaintance extended from Colorado to the Rio Grande. She was first cousin to the Celebrated chieftain Osceola. Being of the Osceola family, Amy followed the fortunes of her chieftain, and in the end, witnessed his downfall. Fascinating history of the woman and her tribe.

Mrs. Rebecca J. Fisher (Rebeeca Jane Gilleland born August 31, 1831) was affectionately known as "the mother of the Republic," Her name was always spoken in reverence. She was a charter member of the Daughters of the Republic of Texas, the organization which she has served as president for many years. She was a great woman, and this is her great story.

The Passing of a Pioneer

There are few women now living who occupied for years so strenuous a place in the planting of the seeds of civilization in the western wilderness as did Mrs. Lee, and looking back over the times in which she lived and moved and filled her place so well, one of: the manifold wonders of the Divine authority is again seen, in that he endowed such women with strength beyond their sisters of the present day. It was a part of the Divine plan, that the men and women who took up their abode in the wilds, among savage animals and among still wilder men -who lived constantly in the firing line of danger-should be men and women of heroic mould, such as Brooks W. Lee, and his good wife…This is her amazing story, and good early Brown county history and genealogy.

Further mentions: born in Waverly TN 1840 Ichabod Adams and Caroline Adams, When she was 10 she moved to TX Henderson County not far from the old Fort where the tragedy of Cynthia Ann Parker happened. The pioneer counties of this state, and their first settlers-Polk, Shelby, Jackson, Bell, Rusk, Jefferson, Crockett, Bowie, Tyler, From Henderson county the family moved to McLennan county, and there Keziah Adams, -who brad grown into lovely young womanhood, met and married Brooks W. Lee, in 1857, Brooks W. Lee and his bride, moved to what is now Brown county, about the time the county was organized, and liking the lovely valley of Pecan bayou. Brooks W. Lee once decided to build for himself and his posterity a permanent abode in what came to be Brown county, and so we find that in the year 1858 when the State Rangers were organized he was among the first to enroll for service in case he was needed.

SELLER’S NOTE: IF YOU ARE INTERESTED IN HARD TO FIND LEE FAMILY GENEALOGY, OR EARLY FANNIN , HUNT, COLLIN AND GRAYSON. COUNTY GENEALOGY, HERE IT IS!

By T U Taylor

This is excellent reconstruction-era history of four counties: Fannin , Hunt, Collin and Grayson. Story about the desperate feud that occurred in this area, in the "thickets", between the Lee family (Southern sympathizers) and Lewis Peacock, leader of the Union League around Pilot Grove. This thing was a bloody mess -- this is the true account...

Also has section on "Later Lee Family History" in which is included in the account:

Perhaps it will be interesting here to trace the Lee family. Daniel W. Lee was born June 5, 1810, and settled in Lamar county, Texas. His first wife was Polly Davis, whom he married in Arkansas; and by her he had ten children. She died in Lamar county not far from Honey Grove. Later he married Betty Ward, known in the Leonard neighborhood in the writer’s day as "Aunt Betsy. " In 1859 Dan W. Lee patented 157 acres of land on the line between Hunt and Fannin, the latter being located wholly in Fannin county. There Daniel W. Lee established his stock ranch and lived until he was killed by Will Smith in 1877. His children by his first wife were Minerva, who married Martin Smith; Susie, who married Frank Mahan; Bob Civil who married Linda Mahan, sister of Frank Mahan; Bill, who died in the war; John, who, married Jane Eby, George, who died in the Confederate service: Henry, whose first wife was Nanny.

This article then goes on to describe how that because of the Union League, the Lees were ever on the defense. Further mentions:T. R. Williams., George Bumpas, Ben Hays, Buck Shortridge, Colonel Jaek Russell, T. R. Williams, Between the Mustang and Wild Cat Thickets there was a broad prairie north of the present town of Leonard., . Will Smith, the son of George M. Smith who lived six miles north of the present town of Leonard, White Ragsdale, Billy Skipwith, the Bogy place. Lige Miller, Valley Creek., Thomas Ox Mill a mile from Leonard, Uncle Frank K. Taylor, Col. H. W. Lyday, Ashley Evans, Bonham., Jesse Wilson and Mrs. John Hancock, John Pennel of Tom Bean, Catherine Elliott, B. B. Cobb of Waco., J. Lee Taxpley and Wilbur Allison, This is a fantastic article – worth the price of the magazine alone, especially if you find that genealogical treasure among these many nuggets!.

A W Thompson. Story of Thomas E. Ketchem, familiarly known as "Black Jack," the leader of the most desperate gang of outlaws that ever terrorized the southwest. He was an Outlaw Bandit, Murderer, & Train Robber. The taking of human life was of little import to him, and soon became a common thing. When a man can enter a frontier store, shoot the proprietor, and as wife and child rush in from a back room to see what has occurred, quickly turn his gun on them, he is case-hardened. An unusually fine shot with either right or left hand, fearlessness and cruelty were combined in his makeup. Nearly six feet tall, black hair and piercing eyes of the same hue, regular in features and erect of figure, weighing perhaps 180 pounds, he was before his incarceration pending his execution, a picture of well-developed manhood. This is his true and tragic story.

W L Evans describes interesting journey from Fort Worth to Griffin in 1876.

Much misunderstanding about this early TX figure is cleared up in this story. Jean Lafitte was not a pirate in any sense of the word. He was not even a sailor, but a French blacksmith who emigrated from, Bordeaux, France, to New Orleans, at which latter place there were people living as late as 1866 who remembered seeing him plying the hammer in his shop at the corner of Bourbon and St. Phillip streets. He did not know enough of the art of navigation to manage a sail boat and was never at sea but twice in his life-once when he came from France, and again, when flying from the odious name of pirate, he and all his possessions went down in the Gulf of Mexico.

By Mrs. Mattie A Maddux, whose father was William Greenwood one of the early settlers of Mason County. Major Van Dorn, John B Hood, Camp San Saba,

Amazing bravery of Mr. Duval West, 1888. There was one night in particular when Duval West showed his nerve, nerve that made him look- death in the face for an hour and twenty minutes; nerve that saved the United States Government the loss of its mail and the Southern Pacific Railway a costly robbery. Few persons know that West was the right-hand man of United States Marshal Rankin in days when the frontier of Texas harbored many bad men and that position spelled fighting.