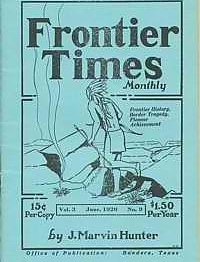 "Injun Fightin" With The Texas Rangers

Events of this account occurred in Mason Co., in 1875. This is excellent history of the area and a great account of the Indian pursuits that followed a raid upon the ranch of early Mason, co. settler and prominent citizen, John Gamel. Those involved in this important pursuit were Capt. D. W Roberts, Ranger Company D and the men picked to go with him were: Second Sergt. Jim Hawkins, Privates Paul Durham, Nick Donnelly, Tom Gillespie, Mike Lynch, Andy Wilson, Henry Maltmore, Jim Trout, William Kimbrough, Silas B. Crump, Ed Seiker, Jim Day, John Cupps, and one other, the author of this account, Srgt. James B. Gillett. This account has many notable historical details of this part of Mason co. in 1870’s. Story has old photo of Sqt. J. B. Gill V Meeting F. H. Lehmann After Forty-nine Years. Lehmann had been captured by the Indians in Mason county some years before this fight and had became one of them. He had hidden in the grass while the rangers were hunting him, and after they had gave up the search and disappeared he had followed on the trail of the Indians until he rejoined them.

Reminiscences Of A Texan

SELLER’S NOTE: THIS ACCOUNT ABOUNDS IN RICH GENEALOGY, EARLY SETTLERS AND NOTABLE HISTORICAL EVENTS THAT OCCURRED IN AND AROUND UVALDE COUNTY IN 1860’S AND 70’S.

Joe T. McKinney. Author’s father was Felix Carroll McKinney. He was a native of South Carolina and the son of Archer McKinney and Mahaley Howard McKinney. His mother was Mary Pocahontas Cook McKinney, the daughter of Joseph T. Cook and Lucinda Bates Cook. Joe T. McKinney was born in the town of Falcon, Columbia County, Arkansas, June, 2 1858, and here recounts his experiences in the town of Uvalde, Uvalde co. where he settled in 1865 and lived in proximity to kin who had previously settled there. He goes on to relate many details of his life and events in the area, with numerous names and places mentioned – this is truly an exceptional first-hand account, rich in details.

Six Years With The Texas Rangers

Bill Longley And His Wild Career

This is an authoritative account of the reknown TX badman whose skill as a gunslinger is perhaps unsurpassed by all the badmen of the frontier. The information in this article has been culled from various sources, the Galveston News, the Austin Statesman, weekly papers of 1875, quotations from Giddings Tribune, individual acquaintances of Bill Longley, state records in the office of the Secretary of State and in the State Library, and many personal friends of the writer.

This lengthy and superb article includes the following subheadings:

The Daddy Of All Hail Storms

A. Huffmeyer. This fearsome event occurred on the evening of May 19th 1868 in the San Antonio and surrounding area. Hailstones weighed from one fourth pound to over two pounds each. It started northwest of the city about Helotes, and took in a stretch of country four or five miles wide, and spent its force about three miles below the city. There was absolutely nothing left in its wake. Fields of corn, waisthigh, were cut down, and all of the fruit trees were trimmed of leaves and fruit, and the beautiful gardens were beaten into the ground. Thousands of chickens, turkeys, and birds were killed, dogs, calves, sheep and goats were also killed, and there wasn't a roof, door or window left on the north side of the buildings.

Further mentions: St. Mary's College; Ed Steves, the father of the present owner of the Stevens lumber yards; Also mentions a couple of other notable hailstorm in the region.

Col. Martin L. Crimmins. This story chronicles the time that Robert E. Lee spent in Texas, including numerous accounts of his correspondence to wife and relatives in Virginia and his feelings about the place and people.

The following unusually interesting account of a happening in Kenedy, Karnes County, Bee county, Goliad and Atascosa Co in March 1875. It was then that a man by the name of Frank Fountain and about thirty cowboys, came in quietly on San Antonio river and Escondido creek. The men spread out, fanlike, up the creek. and drove out all the cattle that could be found within that radius. By daybreak the next morning they came together a few miles above where the town of Kenedy is now located. The rustlers had herded together a bunch of cattle to the number of some 9000 head, and which they proceeded to drive on west. When the true owners of the cattle arrived, they determined to cut their cows from the herd. The account goes on to describe what happens next and subsequent events. Good history of the area including many names and early ranch info.

Excellent account of this master Texas Historian and his work. "Thirty-one mule loads of silver it was, and they buried it there by a live-oak tree-" But did they?

Four hundred years ago English grandmothers whispered many stories of Robin Hood, but they whispered no stranger or more numerous tales than are told today of buried treasure in Texas.

It takes Professor J. Frank Dobie, secretary of the Texas Folk-lore society and English instructor in the University of Texas, who has dug on many a hill for buried treasure and traveled thousands of miles to gather new legends, to tell the story right. From the palm trees along the Rio Grande to the bleak prairies of the Panhandle, there are doubloons and Spanish gold, silver bars and lost mines, and if you'll dig in a certain hill where a certain tree leans to the east-so the people say. But "In one Texas town there is more color of legend and history than can be found in the whole state of Iowa," Professor Dobie, who has had as many exciting experiences as perhaps characterized Coronado's expedition to America during the years he has spent gathering legends, said. "The southwest, particularly rich in such material because of its Spanish background, literally abounds in lost mines and buried treasures if legends could be relied upon as facts..."

Further mentions: the story of Tumlinson; the J. M. Dobie ranch in LaSalle county; 800 Mexican dollars having been found under a mesquite tree in Atascosa county many years ago; I know of about 400 dollars in Mexican coin that were rooted up by hogs in Frio county 40 years ago,"; While excavators were preparing the foundation of new buildings on Soledad street in San Antonio, several hundred dollars in silver was found, according to old residents of the city; Prejean and Moutons two Cajan farmers; the lost San Saba or Bowie Mine; Live Oak County, Texas; John A. Lomax and Dr. L. W. Payne

Account of Mrs Mary A. (Glasscock) Anderson surviving widow of noble Texas veteran, Mr. Washington Anderson Austin. Account details her travels to Texas with her parents siblings and number of slaves after a troublous 8-day voyage which finally ended on the gulf when they landed at the mouth of the Brazos River in 1835. Further describes settling in Williamson county where they established a grist and sawmill on Brushy Creek, in the vicinity of Round Rock.

Further mentions:Captain Coleman; Judge William E. Jones; Webberville; husband was one of the commissioners who laid out the original town site of Georgetown; Mr. Joseph Cluck

Colonel M. L. Crimmins. In 1884 the Tonkawe were moved to the Oakland Reserve, in the northern part of Indian Territory. In 1890 they consisted of a conglomerate of tribal remnants, who varied considerably in size, conformation and even in language, and only one of the thirteen totemic gentes were known as "genuine Tonkawes." They only had 78 members at that time. The Tonkawes were anthropiephagists in the early days, but they usually ate prisoners of war of other tribes, expecting by so doing to deprive the dead of the possibility of living a second life and taking revenge. They state that human flesh tastes like bear meat.

How Texas Got Durham Stock

Account of Colonel Thomas Jefferson Shannon, who prairieschoonered his way into the vast and howling wilderness in the days of headrights and the buffalo. He is largely remembered by the old timers of the State as the man who introduced the Red Durham strain into the cattle business of the West if not the entire country.

The Red Durham strain is the breed immortalized in our era by the well known Bull Durham advertisements. It gradually replaced the standard Texas longhorn and fortunes were made by the ranchmen who bred it.

Brief account of M. B. Pulliam, of San Angelo, who came to Tom Green county in 1876 when buffaloes roamed the territory, Mr. Pulliam located his ranch three miles from the city on the North and Middle Conchos. He was here when John Arden brought the first sheep into the country from California in 1877. In 1878 Mr. Pulliam lost, twenty-four saddle horses stolen by the Indians...