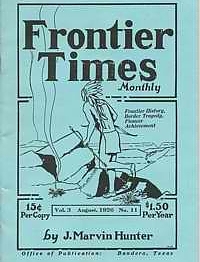 Account of the terrible treatment of one German settler in the Fredrickburgs area in the summer of 1855. He was shamefully abused at the hands of a spiteful element known as the Know-nothing Party (the "American Party,") an organization that was fueled by an anti-foreigner sentiment. In the course of time, however, vengeance was enacted upon the primary perpetrator of these awful crimes in a quite amazing way. There is some good insight into the conditions faced by the earliest German settlers in the Fredricksburg area.

The Battle Of Antelope Hills

One of the greatest scenic and dramatic incidents occurring in the history of Indian warfare in Texas was enacted on the 12th of May, 1858, on the South Canadian, near Antelope Hills. This section had long been the home of the fierce and warlike Comanche Nation, and from that place they set out upon their forays into Texas. It was also their place of fight. This account tells the bloody story.

Old Frontier Events Of Long Ago

The list of murders in Jack county of families and individuals in the years 1857-59, is a large one. It is doubtful if there is any territory anywhere in Texas of equal size to that within the boundaries of Jack, Young, Parker and Palo Pinto counties, where the people suffered as much at the hands of the Indians as have those who, at an early day, peopled those counties. From 1856 up to and including 1864, Indian raids were frequent and the murders most revolting. And if ever men were heroes and deserved the gratitude of their countrymen, assuredly the few who fought so nobly on that frontier defending little children, feeble old men and women, who were murdered and mangled in the indiscriminate slaughter which considered neither sex nor helplessness, should not be forgotten. Mr. Baylor does his part to make sure that we do not forget them in this account of atrocities committed in this region.

REMINISCENCES OF A PIONEER

Early Comanche County settler, J. F. Weaver was born in Hempstead county, Arkansas, in March, 1851, and came to Texas with his parents about the close of the Civil War. This is a brief account of his adventurous life for 35 years in early Conche county and then Kimball county.

The Life and Adventures of Ben Thompson

Notorious gunman, gambler, mercenary to Emperor Maximilian, Marshal of Austin, and longtime friend of Bat Masterson (whose life he saved), this is the account of Ben Thompson. This is an excellent multi-part story of his life written with much detail and historical accuracy. If you need the other installments of this great story, they are available from us – just ask. Also includes excellent old photo of Ben Thompson.

The Seven Wells Of West Texas

Account of the mysterious and abundant natural wells of water and the history of the town of Colorado City, one of West Texas' earliest settlements, about 260 miles west of Dallas. This is good early Mitchell County history.

A Fight In The Big Bend

Account of a sudden and desperate gunfight between horse thief Jim Davenport and some Rangers under the command of Captain J. B. Gillett in 1886.

The Hanging Of John Slimp

Account details early events in Coryell, Bell and adjoining counties of Texas just after the Civil War, when there was no law. The best citizens were forbidden to hold office and the few carpet-baggers and freedmen were either too ignorant to render such service or too corrupt to enforce the laws. In the case described here, a vigilant committee of 50 men was formed and one of the first victims to fall to the "justice" of the committee was old John Slimp, who lived on a place alone up the river from Moffatt, Bell county north of the lower Belton and Gatesville road.

Further Mentions: the Greens in Coryell County who were accused of being at the had of the worst set of horse thieves that over infested these counties,a Mr. Hall on Station Creek, Leon River country around Moffatt, He was a captain under Price in Missouri, and later under Forrest east of the river, Grimes, Miller

Last Raid Of The Comanches

The dead body lay on the floor inside the house. His clothes were bloody from gunshot wounds. By his side knelt his mother and sister, weeping. A few minutes before the father had left the house hurriedly to help to trail the Comanche Indians who had killed the boy.

Thus begins a tale told by T. J. Meredith who moved to Kimble County in 1876 and witnessed the raid. Mr. Meredith then 20 years old, was one of the first to reach the scene and participated in the lively chase which followed. The raid occurred at the Kountz home, near Junction, on December 24. It was the last fatal raid by the Indians in Kimble County. This is the story.

Negro Mother Murders Her Own Child

Dreadful account of a mother who was void of natural affection, and sliced the head of her 2 year old son from his body, while he was sleeping in bed.

Let’s Save The Texas Longhorn

For three quarters of a century the fame of the Texas Longhorn has been spreading until' today it has world-wide significance, but the species is now almost extinct. A few ranches in South Texas may have descendants of the original Longhorns, but they are scarce. A few days ago Colonel George W. Saunders, president of the Old Time Trail Drivers' Association, in conversation with the editor of Frontier Times, in reference to the fast diminishing tribe, endorsed J. Frank Dobie's suggestion that the state set aside a reservation for the Texas Longhorn, and believes that immediate steps should be taken to keep the breed intact like the buffalo, as zoological specimens, etc. Now comes The Cattleman of Fort Worth, Texas, with a ringing editorial on the subject of their preservation, which we publish below:

The following information about frontier posts in Texas was furnished us by Col. M. L. Crimmins, retired, of Fort Sam Houston, and was taken from, the "Army Register for 100 Years, 1779-1879"

Fort Duncan, near Eagle Pass, Texas, was one of the frontier posts which has quite an interesting history. This is the story.

Further Mentions: Mrs. W. A. Bonnet, of Eagle Pass,Camp Eagle Pass,California Camp,In 1863 the Federals and Confederates had a skirmish here,Colonel Robert E. Lee often came here,From 1861 to 1865 the Confederates were in possession of the post,General Joe Shelby,General Shafter

It is likely that the volcanic regions of Brewster County will be explored for gold some time in the early future, as it is known that a vein of gold ore (free milling) was discovered about 25 years ago by a man now deceased. Recently when D. M. Bennett was visiting relatives in Oklahoma, he talked with Judge Alexander Gullett of Tishomingo, who informed him that his son ran onto a vein that assayed higher than the free milling ore of the Klondyke region of Alaska, and that he intended to come back to the Big Bend and explore the country that his son claimed contained the gold ore. Others exploring the Big Bend have also found small gold nuggets and other valuable mineral outcroppings. The story of the Nigger gold mine is being revived, and many claim...

The Passing Of A Pioneer Mother

This article is about Eliza Ware who was born on September 25th, 1841. She came of heroic parents clear back to Revolutionary days and before. Her father, Captain William Ware, was under General Sam Houston at San Jacinto, where he rendered to his chief and to the cause of Texas Independence valuable and effective service. Her grand father, Colonel John Crane, was a companion of Houston and fought together with him in the War of 1812-14 and earned great distinction. Both Crane and Ware took prominent parts in the war for Texas Independence. Eliza’s father was one of the first to cross the line when Ben Milam called for volunteers to storm San Antonio, materially aided in the capture of General Cos, was wounded at Verimendi, and was present when the gallant Milam was killed: Captain Ware was a man of distinguished ability. Eliza Ware, (later Mrs. Joel D. Fenley) lived through the days when life was a hazard every day. She saw the blood curdling savage attack upon the settlement and heard the hair-raising yell of the painted warrior who sought the life and scalp of her loved ones. Here is her story.

The great western writes seeks to clarify mis-information about the true and noble character of the Texas cowboy, whose image suffered from the fanciful notions of those who sought to borrow capital from the courage and strength of this vibrant breed of true manhood. Includes an excellent letter of a true cowboy character.

For months now I have been on the go, seldom spending two nights at the same place ... It is a queer thing how any human can get kick out of days of hard riding in the wind and snow, no shave, no bath, half of the time sleeping cold and with just enough to eat, but a man can get the kick and enjoy the life...