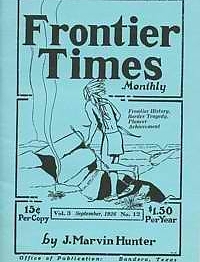 The Irish Progenitors Of Texas

Within the narrow confines of San Patricio and Refugio Counties, which border the coast immediate­ly north of the city of Corpus Christi, very early pioneer events occurred that pre-dated the settlement of the remainder of the State and the frontier. These events tell a story of patriotism, perseverance and fortitude that finds no parallel in the annals of any nation--things that al­most stagger credulity. The Irish settlers, James McGloin, John McMul­len, James Power and James Heweston, Mrs Rosalie B Priour and others were at the heart of these events. This very lengthy and detailed story provides MOST EXCELLENT EARLY HISTORY OF THESE AREAS AND THE IRISH SETTLERS INVOLVED.

S. W. Merchant was born in Texas and was raised in Titus county, near Mount Pleasant. When the war broke out between the states, Mr. Merchant, then in the vigor of a joyous young manhood, was in El Paso Del Norte, and when the Federal troops were withdrawn from the fron­tier posts of Texas, early in 1861, he and a few others were employed to take charge of Fort Bliss, near El Paso, and to look after the post and the property belonging thereto. In February, 1861, Bethel Coopwood, the two Holden boys and a man by the name of Winn and S. W. Merchant set about and organized a body of troops known as the Arizona Spy Company, with Bethel Coopwood as captain. This company was made up of 64 men, who, like Mr. Merchant, were seasoned to border life, and were ripe for any adventure, however daring or desperate. They were all Texans and many of them bore the scars of many fierce conflicts with Indians and border ruffians. From the date of the organization of the Arizona Spy Company until the dis­astrous termination of the Sibley in­vasion of New Mexico in May, 1862, these Rough Riders of. the border were almost constantly in the saddle­. This is their story.

Excellent account not only of the pioneer ranchman, but of an experience that took place when the author (a good friend of Mr. Coffey’s) and Coffey went fishing for Channel cats on the Colorado and ended up the target of Comanche warrioirs.

Further mentions: the Lew Ginger Pioneer Min­strels at Fort Concho, in Western Texas,the Coffey Ranch, at the mouth of the Concho, where it entered the Rio Colorado,Bob Taylor,

Notorious gunman, gambler, mercenary to Emperor Maximilian, Marshal of Austin, and longtime friend of Bat Masterson (whose life he saved), this is the account of Ben Thompson. Blood flowed wherever Ben Thompson was present – he just seemed always to invite trouble. This is an excellent multi-part story of his life written with much detail and historical accuracy. If you need the other installments of this great story, they are available from us – just ask.

Account of Rev. J. M. Strickland of Alvin, Texas who is a staunch old pioneer of Comanche County. He set­tled on the Scott farm, on Coperas Creek about eight miles from De Leon, al­though there was no De Leon for some years after he came. Comanche was a mere village in 1875, when he landed there. He tells the very sad story of the desperate plight of his youth and family who were ravaged and scattered during the dark period of the post-Civil war days. He lost track of his siblings, most of whom died in the interval, but amazingly met up with his sister 60 years after they had been brutally separated.

Account occurs in Burnet county, Texas which had its share of Indian troubles in the early days, one of which is the subject of this account.

A young boy by the name of John Ted­ford went out early one morning to help his mother milk, and was sent after the calves. She waited quite a long time for him to return, then decided to go up in the pasture herself. When about ready to start she heard the boy coming, uttering scream after scream, and as he neared she saw two big Indians reach down and pick him up. They bound him hand and foot and rode away at full speed, giving Comanche yells that filled the mother heart with terror.

Account of Captain J. W. Cottrell, long-time resident of Comanche County who settled in what later became known as Cottrell Valley. This story details his courage as a United States Deputy Marshal and many of the desperate engagements which he endured in the area.

James Dunn was renowned as one of the most daring Indian fighters of his day. His exploits with wild Indians, and his many narrow escapes from death would make as interesting read­ing as the adventures of Big Foot Wal­lace, who was his companion in many exciting encounters with Indians. James Dunn, while a red-headed, freckled-faced Irish boy, was, in the early 1830s captured on the streets of San Antonio by Indians during one of their raids in the city. The color of his hair, and his tender age probably saved his life, for his captors stopped at the Alazan Creek, where Commerce Street now crosses it, to allow the squaw time to wash the freckles from his face and what they thought was red paint from his head. He was a prisoner among the Indians for some time, finally escaping and returned to San Antonio. While he was with the savages he became profi­cient in woodcraft, Indian ways and the trapping of wild game, which after­wards proved as a geat assistance to him in the stirring life he was to lead.

The Tribnne's Special Correspondent Was Among the Slain

Account of the terrible battle written by the Bismark Tribune special correspondent with Gen. Terry, who was the only pro­fessional correspondent with the expe­dition. His last words were: "We leave the Rosebud tomor­row and by the time this reaches you we will have met and fought the red devils, with what result remains to be seen. I go with Custer and will be at the death." This is his account of the battle from eye-witness view.

Years ago an immigrant, weary of wandering, came upon a sheltered spot in the foothills of the Chiricahuas. Here, beside a spring he built his house and made a home for his wife and, boy and girl far from the homes of other settlers. Often his work took him far out on the prairies and his wife was left alone with the children for days at a time. Aunt Diana, as she was fondly called, was loved by all her distant neighbors; not even fear of the Indians could keep the young people from riding eight and ten miles to spend the day with her and then back home again in the evening. One bright forenoon Aunt Diana and the children were alone. She was iron­ing and Mary, her daughter, was busy with the morning chores. Johnny was playing somewhere in the yard. After one of her trips into the front part of the house, Mary came running to her mother and said, "Oh, mamma! there's a big ugly man coming in at the gate." Almost at the same time a step was heard outside the kitchen door. Aunt Diana glanced up to see a wicked look­ing Mexican standing before the screen door...

A Foul Murder In Mason County

On December, 1892, there was com­mitted the foulest murder that was ever perpetrated in Mason county, Texas. Although committed thirty-four years ago, the event is yet fresh in the mem­ories of most of the people there, who can recall vividly the thrill of horror which pervaded the public mind when the news was carried from lip to lip that Adele Kaufman. a pretty seventeen-year­ old girl, had been murdered while re­turning home from school. The mys­tery of the murder of that beautiful girl is as deep and profound today as it was Thirty-four years ago, although every effort was made by diligent offi­cers, backed by a justly enraged public, to ferret out the murderer and, bring him to justice. If the red-handed mur­derer is still living, if he still dwells among the people of the earth, a burn­ing conscience must inflict on him all the tortures of the damned.

Account of bloody events that occurred in the fall of 1873, to a party of ten men who were in the Big Spring country hunt­ing buffaloes. Big Spring was a large pool of clear, cold water, in the head of a gulch, about two miles south of the present town of Big Springs, and was the only water then known in that dir­ection until you reached the Canadian River.