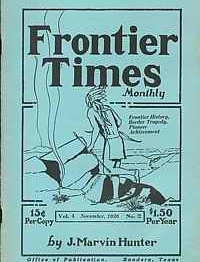 In 1894, only eighteen years after the defeat of Custer's command at the battle of The Little Big Horn, Rain-in-the Face (Itiomagaju), told W. K. Thomas through Interperter Harry McLaughlin, the Indian's version of the fatal battle. Rain-in-the-Face's vengeance has been many times told but the Indian's recital is of particular interest in that it makes plain their tactics, shows the inferiority of the soldier's weapons and calls attention to the shortcomings of Custer's supporting officers. This account gives the unique perspective of the fateful battle from the eye of the Indian warrior and victor.

Account of true frontier lady and settler, Tlitha A. Baxter, (later Mrs. William L. Cunningham), pioneer of the Panhandle and a resident of Roberts county for 37 years. The family moved to Texas in 1869, first locating, at Cleburne. She was the mother of nine children; six sons and three daughters. Her husband died in Cleburne in 1880. When the Cunningham family which ranks with the real old timers of that section, moved to the Panhandle in 1889, and settled on the north side of the Canadian River, their nearest neighbor was ten miles away. Their place was half way between Canadian and Adobe Walls and the Turkey Track Ranch, and was the stopping place for all travelers passing that way. Cowboys riding the range always found a welcome in the Cunningham home.

This is an authentic early description of the county as found in the Texas Almanac of 1866. It abounds in interesting data pertaining to Mason county in its earliest days.

Further mentions: The big and little Saline Creeks, upon which are many valuable salt licks, Big Bluff and Little Bluff Creeks, Leona, Honey, Comanche, Willow, Elm, Beaver and San Fernando Creeks, Tecumsech Creek and Ranch Branch , Fort Mason , There are not less than 200 families in the county, half of whom are Germans. There are four excellent schools, besides some smaller ones and not less than 400 children to be educated.. There are five places of worship in this county. The Germans are mostly Methodists... James River, and Mill Creek.

Quanah Parker was the half-breed son of white captive woman, Cynthia Ann Parker and her husband, a very prominent Indian warrior, Peta Nocona. While much has been written on the life of this interesting individual, Charles Goodnight’s account rings with more authenticity and historical honesty than most. It is given here in the excellent account. So far as I know, Quanah Parker never broke a promise or a treaty. He claimed, and I believe it true, that, he never allowed any women to be killed in his battles. I personally know of two that he had two or three days in the woods and turned loose, showing them the way to go home.

Mentions: he was born in the' year 1846, in what is now Oklahoma, on the northwest branch of Cache Creek , the origin of the name, Quanah , Pease River , The tribes were on their way south and had camped on the south waters of Pease River, at the foot of the Staked Plains, in what is now Motley County , Lieutenant Ross , the Nocona Band , the Quaharas , the Penetakers , the Kocheitakers , Red Bear , Burk Burnett , McKenzie , Ft. Sill , Palo Duro Canyon , Mrs. Lenn Banks, of Cache.

The first governor of the big, broad, brand-new State of Texas was a pioneer man of Marshall, Texas, the Honorable John Pinckney Henderson. This is a brief account of his life.

Trials And Tribulations On The Frontier

Account of one of the pioneer mothers of Southwest Texas, Mrs. Hezekiah Griffin, of Bandera and Medina counties, and some of her trials on the frontier. This splendid mother of pioneer days is a fair example of the stock which settled in Texas in that far distant past and helped to develop the state. When she was twenty years of age her parents moved to Cooke county, Texas, near where Gainesville is now located. On December 22, 1861, she was married to Hezekiah Griffin, and we lived in Cooke county until 1865. It was so cold there, and the Indians were so bad that they moved to Bandera county, and settled on East Verde Creek, seven miles south of the town of Bandera and to Medina county in 1874.

From Teneriffe To San Antonio

The story of the Canary Islanders is one of the most interesting chapters in the history of Texas. By decree of the home government, thirteen families and two single men, pure Spaniards from the Canary Islanders, and some Tlascalans undertook to establish San Antonio. They first set to work around the "Plaza de la Constitution," today Main plaza. This story traces back the real founders of the great city to 1731, and shows the immense influence these original settlers had on the area.

This is the story of the formidable old Comanche chief, Ketemoczy, from whose name comes the more abbreviated name Katemcy. In the southern part of McCulloch county is the beautiful San Saba river. In among the granite rocks near the head of Katemcy Creek, near where the thriving little village of Katemcy is now located, was the winter camp of the Comanche chief, Ketemoczy. It was Among the cliffs and deep little gorges of these granite rocks the old chief and his tribe would spend the winter, and then in the springtime move to more pleasant quarters down on the San Saba, near the present village of Camp San Saba. This is his story.

Brief account of the honor due to Capt. Charles Goodnight, the veteran cattleman of the Panhandle who was the first man to establish a ranch in that far-flung part of Texas.

Mentions: J. Frank Dobie adjunct professor of English of the University of Texas , Palo Duro Canyon, which formed part of his ranch

Brief account of Hige Nail, who among many other notable events, made the first successful cattle drive across Red River near Doans in the early 1870s. At that time cattlemen considered it taking heir lives in their own hands to attempt to drive a herd of cattle to the Northern markets as far west as the roans crossing in Wilbarger County. It, was first suggested to the cowmen of South Texas by Hige Nail that he would undertake the first drive across the Red River at a point now near Doans through the wild Indian Territory north of Wilbarger County.

HUNTS FOR GOLD IN WEST TEXAS.

Buried Spanish treasure, gold, romance hazy legends of sudden raids and the grasped out stories of dying men directing their rescuers to hurriedly hidden treasure trove, are interwoven in a local tale of adventure exceeding in interest wildest imaginings of gifted fiction writers. The final touch to what promises to be a treasure hunt such as West Texas has not seen for many a day, is given by the clandestine presence of a mysterious Spaniard, who has honeycombed land fifteen miles northeast of Menard with holes. These miniature shafts are spaced about fifty feet apart and are ten feet deep, and large enough in circumference to allow a full grown man to descend into them. The air is full of stories of fabulous wealth hidden in the earth …

Notorious gunman, gambler, mercenary to Emperor Maximilian, Marshal of Austin, and longtime friend of Bat Masterson (whose life he saved), this is the account of Ben Thompson. Blood flowed wherever Ben Thompson was present – he just seemed always to invite trouble. This is an excellent multi-part story of his life written with much detail and historical accuracy. If you need the other installments of this great story, they are available from us – just ask. This account deals with his days in ranger service under Burleson, and his election and re-election as Marshal of Austin.

A Tragedy Of Trail Days

The following interesting account of a tragic incident of the old trail days, was related to S. C. Butler, by an eye witness. One of the principles of the affair, A. I. Moye is one of Kenedy's best known and most highly respected citizens. The article was shown Mr. Moye and is published with his consent.-Editor.)

Account of a deadly engagement between Andy and Babe Moye, on the one hand, and a man by the name of Bill Campbell in the town of Ogalalla., Nebraska, the 6th day of August, 1877. The shootout was precipitated merely by an uncomplimentary remark about the food the Moye brothers were eating.

DEATH OF A TEXAS RANGER

Brief account of the life of of Martin G. Coyle, Texas Ranger born in Madison county, Kentucky, May 10, 1856. He settled in Texas and from 1877 to 1880 Mr. Coyle served as a member of the Texas Rangers, at a time when he had to deal with Indians, Mexican greasers and desperadoes.

Bowie’s Silver Mine On The Frio

Account details not only the man, Jim Bowie and a bit about his brothers, John and Rezin, but focuses then upon the great silver mine on the divide between Main and Dry Frio, about ninety miles a little northwest from San Antonio, and consists of a circular pile of rocks on a sloping hillside east towards Main Frio.

Further mentions: Bowie's fort , James Bowie's men-B. F. Highsmith, A. J. Sowell, Sr. and P. M. McAnley, The Bowies traded some in African slaves, which, they purchased from the pirate, Lafitte , James was in Long's expedition and in 1830, came to San Antonio and soon after married the daughter of Vice Governor Verimendi , Mexican s at Velasco , He often came by Gonzales in De Witt's colony , the "Bowie Knife." , old settlers at Gonzales , Robert Armstrong, among the bravest and best rifle shots of the men who followed the fortunes of James Bowie , The negro Jim, lived many years after the death of Colonel Bowie in the Alamo and went by the name of "Black Jim" Bowie , Walter Burris , publishers, D. Appleton & Company , Will James, Jos De Yonge and Edward Russell, Douglas Branch, a former Texas cowboy.

Early historical records as recorded in the Bandera County Wool Growers Association minutes from the 26th day of March 1888. Numerous names and early events are mentioned.

Could Custer Have Won?

The author of this story maintains that the campaign against the Indian and the consequent death of Custer and his men is directly traceable to the breaking of the pledged word of the government at Washington, the treaty of 1860 having promised the Sioux that the Black Hills region should remain unused by the white men. This part of their country was regarded as sacred ground by the Indians. While General Hazen had reported the entire Black Hills region as almost uninhabitable and entirely desolate: Custer had found and reported it a land of paradise so in July, 1874, in direct and deliberate violation of its pledged word, the Government sent Custer as escort to a scientific expedition to determine the character of the region. There is little doubt that the intention was to confiscate the territory should it be found worth while, a procedure in full keeping with precedent.

Account of the life of John J. "Uncle Johnny" Long, and his life which was mingled with hardships and dangers. He was an early settler when the Panhandle was the home of the buffalo and the hunting ground of the Indian. The settling of the country, the opening of its vast acres to civilizing influence of cattlemen and farmers, was due to the efforts of that bold and hardy army of pioneers like Johnny Long. This is his story.