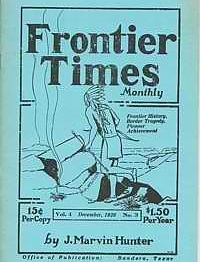 Killing Of John Bowles In 1859

Account of a bloody Comanche raid that occurred in 1859 on the Frio just above Dr. Isbell's in Uvalde county. Some good, early history of the region around Leakey, Sabinal Canyon, above Dillard's, and Newman Patterport's settlement on Comanche Creek,

Story details the murders of Youngblood, Killen, Washington and Mrs. Brown, all in Parker county in the early 1860.

THE GUNMAKER OF FREDERICKSBURG

Account of Mr. Oscar Krauskopf of Fredericksburg, who was taught the gunmakers trade by his father, who himself had learned it in Germany before emigrating to Texas around 1845. The product of young Oscar's own craftsmanship is of the Kentucky rifle type, with long heavy barrel, but carrying a larger ball than its prototype. It was designed as a buffalo gun, and its. type was capable of the longest range and greatest killing power known at the time…

This story has to do with a standoff and bloody fight that occurred between Chiricahua Apaches, (considered the most foul and ruthless of all Indians) and Mr. Bob Gilbert who, along with a man named Mathews withstood the Apaches near a cienega in the tragic days of the Southwest, when the Apaches overran Southern, Arizona, Southwestern New Mexico.

Mentions: Apache Chief, Cochise , Horsehead Crossing, on the Rio Pecos , the Gilbert party , the Quartermaster's Department at Camp Bowie, a military post at the western entrance of Apache Pass , General Crook , Apache chief, Geronimo , the Penasco, a couple of miles above where it enters the Pecos , Mr. J. Frank Dobie

Brief account of when Ranger captain John H. Rogers was able to walk into the muzzle of a double-barrel shot-gun in the hands of a desparado who had it leveled at him and cocked, threatening to shoot if the ranger captain took another step, and why he was able to do it.

MADE TRIP TO TEXAS IN COVERED WAGON

Brief account of Mrs. S. E. McCullough, who was 3 years old when her parents, Mr. and Mrs. John Thomas Smith, came overland from Shelbyville, Ill. in a covered wagon and settled near Garland, TX. She married William F. McCullough, also of a pioneer family, and the Smiths and McCulloughs were active in the early civic life of Garland. Her father was a pioneer of Garland, held the position of first postmaster there.

Account of Joe Lowe, "Rowdy Joe", of Luling, TX. Though called “Rowdy” by most, he was actually a quiet, very peaceable individual, but one of those who had the reputation of being "quick" on the draw. And that was a very useful accomplishment in those days of long ago - especially if you were in Joe’s type of business. Luling was one of the "bad" towns. In a short time it became built up with saloons, dance houses, gambling halls, hotels and livery stables. Joe’s was the first dance house and saloon in town. It was presided over by Joe and his wife, Kate, known as "Rowdy Kate"

Further mentions: Joe's large dance hall was south of the railway, which ran through the center of the town , the Watrous Saloon , two Sisters of Charity

Account especially focuses on troubles and deprivations endured by the first settlers of Cherokee Co. Comanches were unusually aggressive in this area and settlers were given strict warning not to settle in the area. The Killough family as well as the Wood and Williams families all endured gruesome hostilities.

Account of the bravery of Ethel Harrington, 16 year-old remarkably fearless girl and an expert rider, who spent much of her time on the range looking after her father's cattle. She was of slight build, a blond, fairly tall, and might have weighed one hundred and twenty pounds, and had won the admiration of everyone who knew her for the active interest she took in the management of her father's business, and was also a girl of rare attraction. The story details her encounter with an Indian desperado, her cool and calculating demeanor, her final quick resolve to slay the brute. The story reads like fiction, but has the added value of truth. The character of Eskimezene, the Indian Chieftain, develops traits that, even with the rising anger at the killing of one of his braves, shows his overwhelming admiration of bravery, even in one he chose to call his enemy. This is an amazing story.

Further mentions: the San Pedro Valley in Arizona , Camp Grant , the Santa Cruz Valley , Apache chief named Eskimezene , the more distant tribes on the San Carlos River, where nearly all the Apaches of Arizona were kept and cared for by the Government. , the Gila River , Dudleyville , Dudley Harrington , the Harrington Ranch.

Frontier Times publishes below a letter from Mr. E. A. Brininstool, of Los Angeles, California. in answer to a very interesting article "Could Custer Have Won?" by Mr. Morve L. Weaver, of Visalia, California, which appeared in the November issue of this magazine. While we do not encourage controversy, we wish to keep the record straight, and take pleasure in publishing Mr. Brininstool's letter. Mr. Brininstool has written several books dealing with the frontier, and among the most interesting is his "A Trooper With Custer." wherein he gives full particulars of the Custer Massacre and many hitherto unpublished facts.

Los Angeles, California; October 22, 1926
Dear Mr. Hunter
I certainly take exceptions to the statement of Morv L. Weaver of Visalia, Cal., in regard to the alleged "cowardice" of Major Marcus A. Reno in the battle of the Little Big Horn-"disobedience and cowardice on the part of Custer's inferior officers," as Weaver puts it. Plainly This Gentleman...

Mr. Brininstool goes on to offer much convincing evidence to support his own understanding of the situation.

In the early fifties there lived a man and his good wife just seven miles west of the city of Paris by the name of Emily Harris. Mr. Harris had living with him an Indian, a young man, called John, who in every respect had won the confidence of the Harris family, and also of the, other people of the neighborhood who knew him, as they thought. In fact my father and mother thought a great deal of the Indian. Early in the call of 1860 or 1861 Mr. Harris had occasion to be away from home a day or two and left John and a negro boy by the name of Jim at home with his wife. John had always helped Mrs. Harris with the morning chores, so nothing strange was thought when John was left that morning to help Mrs. Harris to finish the morning work. The negro, Jim was sent to the field to dig some sweet potatoes. Mrs. Harris told Jim that she and John would bring his dinner to him, but noon came and Jim looked, but no dinner came. Then two o'clock and still no dinner. By this time Jim was getting very hungry, so he proceeded to the Harris home and on entering the kitchen door he found the table just as it had been left from the morning meal. On entering the adjoining room he found Mrs. Harris lying on the floor in a pool of blood with...

This event precipitated and ignited the first mob violence committed in Lamar County. This is the story.

Notorious gunman, gambler, mercenary to Emperor Maximilian, Marshal of Austin, and longtime friend of Bat Masterson (whose life he saved), this is the account of Ben Thompson. Blood flowed wherever Ben Thompson was present – he just seemed always to invite trouble. This is an excellent multi-part story of his life written with much detail and historical accuracy. This account describes Thompson’s confrontation and gunfight with Jack Harris at the infamous Vaudeville Variety Theater, his acquittal of the crime, return to Austin, and the bloody shooting of Ben Thompson and King Fisher in the Vaudeville Theater, authentic newspaper accounts of the most notorious assassination in Texas history, and eye-witness accounts and sworn testimony of the shooting.

If you need the other installments of this great story, they are available from us – just ask.

A letter more than 65 years old which presents a matter of-fact picture of a fight between 19 Indians and 17 white men near Comanche on April 17, 1861, is in the possession of J. T. Lambert of Lueders, Texas.

The letter, faded with age, was written from Comanche county on April 19, 1861, by Mrs. C. M. Neal, wife of Bob Neal, to her sister, Mrs. Disa Cox. The letter was addressed to Mrs. Cox at Hope, Lavaca county, but was sent by way of Belton. The postmark reading "Belton, Texas,. May 26," is well preserved on the face of the envelope. The envelope was formed by folding the letter itself. The postmark shows it required more than a month for the letter to travel from Comanche county to Melton, whence it was forwarded to Hope.

Mrs. Cox was the mother of J. T. Lambert., He discovered the letter in a small desk belonging to his mother long after her demise. That portion of the letter which includes the story of the Indian fight reads as follows...

The Killing Of Chief Peta Nocona

Much has been said and written about the killing of Chief Nocona, the father of Quanah Parker, in the battle on Pease River. Quanah Parker always contended that his father was not killed at the time when the fight between Sul Ross and his rangers and the Indians took place on Pease river, but that he ended his life in peace very soon after his wife, Cynthia Ann Parker, was captured. In 1904 Col. Tom Padgitt, of Waco, wrote the following article.

Capture Of Coe Of “Robber’s Roost”

In the years following the Civil War, a Mr. Coe had become the leader of a notorious gang of desperate men who infested the country between Ft. Lyon, Colo., and Ft. Union, New Mexico. Coe, was a tall, well-built, 35 years old well-dressed man who was always properly armed. His associates numbered some 40 men, as uncontrolled except by their leader as he himself, and their rendezvous was some four miles from the junction of the North Carrizo and Cimarron streams in Oklahoma of today, a stone house on an elevation which commanded a wide view in all directions, known as "Robber's Roost." The misdeeds of this gang consisted in stealing government property, mules and stock from Forts Lyon and Union. This is the true story of the demise of Coe and his gang.

Further mentions: the North Carrizo from Kenton , the Bud Sumpter ranch on the Cimarron , Madison Emery, who trekked across the plains in the sixties and lost most of his oxen on the Smoky Hill trail , Emery Gap , Toll Gate Canyon, just below the present Folsom , the John ranch , the town of Las Animas of today , the Carrizo , Mrs. Emery , Pueblo, Colorado.

Doughy’s Café On The Range