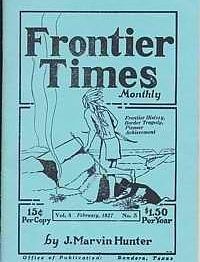 This is the account of the heroic pusuit that occurred autumn of 1862 with a detachment of sixteen rangers, who followed and pursued an Indian trail somewhere to the northwest of old Fort Mason, forty-five miles from the German town of Fredericksburg in an effort to recuse three children taken captive by Comanches.

Account of the life of John Day Morgan who was born in London, England, May 15, 1819. His father's name was Thomas Frances Morgan; his mother's name was Sophia Elizabeth Morgan. Her maiden name was Day. Morgan settled in Texas about the middle of July 1836, when he was only seventeen years old. He established his residence in the wilds of this almost unknown land and soon drifted into the Valley of the Colorado River and into what is now known as Bastrop county. Here he found a home and friends with Captain Wiley Hill, an early pioneer of this area – this is his story.

Christmas in Junction 50 Years Ago

"The old days in the west were grim days when it came to exacting justice. They were the days when the man who did a thing must do it well, and most of all that applied to him who slew his fellow beings. Once he started he must be prepared to keep on, for when he faltered there was no mercy shown him. Men were willing to take the consequences for their own acts and prepared to exact the consequences from others. The same spirit crept into the courts at these times. One of the most remarkable instances of the sterness of frontier judges, came in the case of Jose Maria Martinez, a young Mexican who was convicted of murder in. Taos, New Mexico, in' March, 1854. He had shot down his victim, a well known man of the community, from ambush, that he might rob him.. Judge Kirby Benedict, who presided to the trial, was but 22 years of age, the youngest jurist ever to attain the federal bench. When the jury brought in its verdict, the court, in passing sentence, delivered himself of the following remarkable language"Jose Maria Martinez, stand up. Jose Maria Martinez, you have been indicted, tried and convicted by a jury of. your countrymen of the crime of murder, and the court is now about to pass upon you, the dread sentence of the law. As a usual thing, Jose Maria Martinez, it is a painful duty for the judge of a court of justice to pronounce upon a human being the sentence of death. There is something horrible about it, and the mind of the court naturally revolts from the performance of such a duty. Happily, however, your case is relieved of all such unpleasant features. and the court takes positive delight in sentencing you to death..."

Overland Trip to California In 1850

The author and his family came to Texas from Mississippi in 1849, in ox-wagons, and settled four miles from Belton on the Lampasas river, where they built log houses, opened up farms, bought some stock, and settled down to grow up with the country. All went well until the gold fever broke out in California in 1850. The author goes on to tell of his journey to the gold fields in 1850

The Fight at Ledbetter’s Salt Works

Another Pioneer Passes on

Hon. A. J. Durham, of Sabinal, Texas, writes a brief account of his mother who came from Ireland to New York in 1850 and married Ross Kenedy in 1857, in Brooklyn, and came to settle in Sabinal, Uvalde county, where she remained the rest of her life

Postmaster B. F. Sullivan of Rockwood, Texas, writes an interesting of his life as Postmaster at Camp Colorado, Coleman county for 43 years.

Story of courageous Masonic family, their trials accomplishments and experiences on the early Texas frontier.

By Col. Hays and John Caperton

Excellent and detailed biography; contains a pen-and-ink sketch of Captain Jack Hays as well as a group photo of him and his Company of Texas Rangers.

Nineteen Skeletons in A Grave

A farmer digging a water tank accidentally discovers mass grave of unknown pioneers three miles from Christine on Turkey creek, a town located 10 miles south of Jourdanton. The location of the tunnel-grave is on Turkey creek, about two miles from the old time Tilden-San Antonio road.This is the grizzly account

In United States Army Recruiting News, 1926 The story of the famous Army horse, "Comanche" This horse was the sole survivor of Custer's Massacre.

Stood up to the brutal Mexican, Ygnacio Pesqueira, and was brutally massacred along with his men.

In frontier days, there was a scope of territory, about ten miles east of the town of Menardville, which was known as Pegleg Pocket, so-called because it was an open pasture a mile or two wide by three or four miles long. Near the San Saba river in this "pocket" was an old stage stand used as a relay station during the early days when the overland mail line was in operation between San Antonio and Fort Mason, Fort McKavett, Fort Concho, and other frontier posts. For a long time a one-legged man named Perkins kept this relay station, and it became known as "Pegleg," later the region surrounding it took the name of "Pegleg Pocket." Being on the great overland stage line leading from San Antonio to El Paso, and thence to Los Angeles, California, its isolation in the then almost unbounded wilderness, made it a favorite point of operations for "road agents" of that period, and because of the frequent "hold-ups" and robberies committed in that vicinity, Pegleg became quite as well known abroad as Austin or San Antonio. It was only a stage stand and was never a town or village, its only occupants being the hostlers and never more than two families. This is the story of an army letter depicting a graphic account of a hold-up at Pegleg.

Hardships of A German Family

Monken family makes a perilous trek across the world to a new home.

Col. John C. Jacobs, of San Antonio who personally knew Lottie Deno writes and offers further details on the life of the notable frontier "Mystery Woman" The original article on Deno is found in the January, 1927 volume of Frontier Times.

Exciting account taken from the memoirs of General Walter P. Lane, part of a surveying party formed at Franklin, Robertson county, with William Love and others from San Augustine in September, 1838, via Parker's Fort.

From Wilbarger’s Indian Depredations in TX

Indian massacre of the Morgans, Marlins, and many others. It was on Sunday night, the first day of January, 1839, that a portion of the families of James Marlin, Mrs. Jones and Jackson Morgan were passing the night together at the house of George Morgan, who lived at what is now called Morgan's Point, six miles above the town of Marlin. The remainder of the divided families were at the house of John Marlin, seven miles below the fort. John and James Marlin were brothers, the others of the same name were their children. A little after dark the house of George Morgan was suddenly attacked by Indians, who instantly rushed into the dwelling, thereby giving the inmates no time to prepare for defense. George Morgan and wife, their grandson, Jackson Jones, Mrs. Jackson Morgan, Miss Adeline Marlin, fifteen or sixteen years old, were all tomahawked and scalped in the house in a very few moments. Miss Stacy Ann Marlin, afterwards the wife of William Morgan, was severely wounded and left for dead. Three children were in the yard when the attack was made. One of them, Isaac Marlin, a child ten years of age, secreted himself behind the fence, and remained there undiscovered until the Indians left. The other child, Wesley Jones, first ran to the house, but seeing the red devils entering and tomahawking the inmates, he ran out unobserved by them, and was followed by Mary Marlin, another little child. They both escaped together. The young lady, before mentioned as having been severely wounded, retained her consciousness and feigned death. She was not scalped, but all the rest were. The Indians, after they had finished their bloody work, robbed he house of its contents, and then left. When the Indians departed, the little fellow, Isaac Marlin, who had secreted himself behind the...

Some of the names mentioned in this volume: