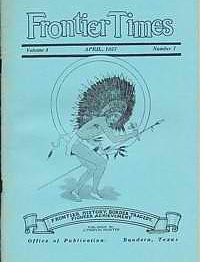 The Shooting Of Maurice Barrymore

Account of the tragic murder of actor Maurice Barrymore, father of Ethel Barrymore, Lionel Barrymore, and John Barrymore. This event occurred at the Marshall Opera House, Marshall, TX in the winter of 1878.

The First Judge In The Panhandle

Account deals with the first Judge in the Panhandle of Texas, Judge Emanuel Dubbs, who with his wife and three children settled originally on Sweetwater Creek about nine miles from where Fort Elliot was then located and also near a small hunting supply town on the edge of the reservation named Sweetwater, which was afterwards called Mobeetie. In the Fall of 1878 he was elected the first County Judge of the Panhandle, a position he served for ten years, until he moved to Clarendon, Donley County. This is his story. Frontier justice makes excellent reading and research – this article is no exception.

A Negro Trooper Of The Ninth Cavalry

Account of Jacob Wilks who was born a slave in Kentucky, about thirty mild south of the Ohio river. While yet an infant his father and mother gathered their two children in their arms and fled, under cover of darkness to the Ohio river, where they found concealment in the jungle until they could attract the attention of a group of fishermen on the north bank of the river. These fishermen were connected with the "Underground Railroad", and took the family across the river and landed them in the free state of Ohio. Wilks was eventually adopted into the family of a Mrs. Waddell who raised Jake with nobility. During the Civil War, he enlisted in the 116th regiment colored infantry and served with distinction. He then served on the frontier and further distinguished himself with honor and bravery. This is his story.Further Mentions: Characters: John Warren Hunter, Jacob Wilks, General McKenzie.

Account of events that occurred in the late 1860's at the Lynch Ranch, twelve miles east of Ft. Griffin where there was a school and two Ledbetter boys, ages 6 and 9 attended. After a storm they were headed back to the ranch when Johnny Ledbetter mysteriously disappeared. Then later there was…

By Chas B. Boyce

Events that occurred around in the renowned cattle town of Junction City near Kimbleville, a couple of miles below the Junction of North and South Llano on Feb. 2, 1888.

Mentions: Dan Baker's store at the mouth of Johnson Fork of the Llano. , the Spiller Colt , Gip Clemmons, a prominent cattleman , Major Spencer, the popular sheriff and law on the Llanos , Tom Evans' place on Elm Creek, Menard County , Major Seth Mabry , the Circle A, tributary of the Little Missouri in Custer County, Montana

Account of John B. Hood's fight with a party of Comanches and Lipans near the head of Devil's river, Texas, on July 5 1857

Bailey, who knew the old scout and mountain man personally for many years in Wyoming, addresses the questions that arise from history’s oft misunderstood evaluation of Bridger. "What kind, of a man was Jim Bridger? Was he a drunken rowdy and an ignoramus? What did he look like and how did he act?" This account answers these and other questions.

Account of KIT CARSON, Indian killer, trail blazer, desert guide and romancer. The old-timers of Taos, NM where Carson made his home, do not remember Carson as a general. They recall him, rather, as a charitable neighbor, an amiable conversationalist, a quiet old gentleman who hated killings and loved Indians. This is the story.

Texas After The Civil War

The author of this account came to Texas immediately after the close of the Civil War. He describes in graphic detail, the very sad and ruinous condition that befell many in post Civil War Texas. The author speaks first of the conditions in and around Jefferson and Hunt co, and then relocating to Denton, nearer the frontier, he speaks of conditions there.

Ragged and half starved, heavy-hearted and some of them wounded, they surrendered their guns, wrung the hands of their comrades in a final farewell, and taking a last look toward the graves that dotted the fields of carnage, completed their journey home. They had been fighting four years for the glory and liberty of Texas.

Many found their homes in ruins; their farms overrun with weeds; their stock driven off by wild and merciless Indians, their barns empty, their business destroyed. Their money was worthless and their people were without government or law. Neighbors had been slain. They were crushed by defeat, and without money or credit...

Some of the vicious, lecherous sort had frightened women and children and one of them went as far as to drag a woman from a horse on Holford Prairie, in Denton county, not far from the little town of Lewisville. This negro was caught by an organized band, said to have been but recently formed, and called the Ku Klux Klan. They carried him to Lewisville, where the lady resided, bound hand and foot, and turned him over to her. She told them that he was the identical negro that assaulted her and she requested them to take him out in the brush and kill him. They replied that they would take him out, but that she must do the killing herself, for that she was the only person that had the right to do so, being the party mostly aggrieved. Accordingly, they conveyed the negro to a lonely spot in the woods, and she shot him two or three times with a pistol, and then the men unbound him. About an hour after a boy came running into the house and reported that the negro was still alive. A man then went out and knocked him in the head with an ax. In about two hours afterward three or four men went out to get the corpse and bury it, but to their surprise the negro was gone, and could not be found near the place where he had been presumably killed. A posse was immediately organized, and by following a trace of blood and foot marks through the timber...

There was a widow with five children living alone on a farm. The husband had perished in the war, while gallantly leading a charge on a federal battery. She had but one horse and this was her only dependence for making a living for herself and children. The thief saw her come home from the field, after plowing all day and watched her feed her horse. He thought, according to his own confession, that as there was no man about the place, he could get off with the horse. So about midnight, while the widow and her children were wrapped in slumber, he stealthily crept to her home, untied the horse and appropriated it to his own use. Great was the excitement in that little family the next morning when the widow arose and found her only hope of making a living gone. Wringing her hands, she and her children went from neighbor to neighbor and reported the theft. The pioneers, as fast as they heard of the widow's loss, rose as one man to hunt the thief, and recover, if possible, the horse. Some of them could trail man or beast through the brush like a bloodhound. They could tell by the impression of the feet of the stolen horse how old the track was and by this means before the sun was down they had caught the thief in Tarrant county. As they returned with him bound on the horse he had stolen, the crowd increased in number, and by the time they had reached a point a few miles from town, the mob was crying "Hang him, hang him! " Already a rope was around his neck, while the thief, trembling, through pallid lips begged for his life. "Brother, brother, brother!" he kept repeating, "have mercy on me." They replied that he might ask God to forgive him, but that they could not. So they hanged him by the neck to the limb of a tree, until he was dead, on the Fort Worth road…

James Butler Hickok, had been christened at birth in La Salle County, Illinois, in May of 1837. From childhood he had handled a rifle and revolver and bowie-knife ; from the time he had learned to line his sights, he had been a restless youngster. So as a lanky youth of eighteen he was already a warrior of note in the bloody guerilla fighting that raged in Kansas before the Civil War. They called him "a bad man to rile;" fast and accurate performer with either rifle or the new Colt's revolver.

The Squaw Who Saved Fayetteville

Account of a white squaw, whose stoicism was as great as an Indian's, yet whose mercy saved the city where her son was killed. The woman knew certainly that her son was dying; that the white men who sent for her did so to implore her aid to keep the truth from the Indians amongst whom her son was a great chief, son of a chief.

Historic Spots Of The Panhandle

Account mentions: the battle at Adobe Walls, in Hutchinson county, in November, 1864 , The battle between the buffalo hunters and Indians at Adobe Walls in June, of 1874 , the Buffalo Wallow fight with the Indians in what is now Hemphill county, September 12, 1874 , a desperate encounter was taking place a few miles to the northward where General Miles' supply trails was rounded up by the Indians , In 1874 an engagement took place between the troops under General Miles and the Indians, in what is now the J. A. Ranch in Armstrong county , The ill-fated Santa Fe expedition , In 1849 Captain Marcy laid out the south Santa Fe trail from Fort Smith, Ark., to Santa Fe, N. M. across the Panhandle, and escorted a train of emigrants on their way to the newly discovered gold fields of California. On this expedition it is probable that the first white children to be born in the Panhandle made their appearance, the time being June 8, 1849, when a pair of twin boys were barn on White Deer Creek in Hutchinson county

Shot Through With Arrows

Chadbourn when a soldier by the name of Mattock, who was suddenly attacked by 6 Comanches, sustained the wounds of fourteen arrows and bristled with them like a porcupine. Three of these arrows had gone so far through him that the surgeon extracted them by cutting the feathered part of the arrow and pulling them through the man's body. This is the account of that engagement.