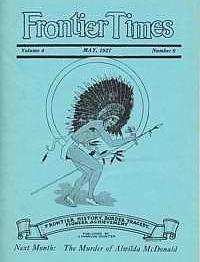 An Indian Boy Executed In Fredericksburg in 1852

It was the white man's fault," declared Mrs. G. O. Otte, an eye witness of the Fredericksburg tragedy ire 1852, "that there ever was any trouble between the Indians and my people."

The feeble light of an oil lamp sparsely illuminated the small room of Mrs. Otte's farm house, where she sat amidst a small family group reminiscing of the days gone by. The oil lamp was burning low and the final hour of day was waning, thus providing a symbolic setting to her own life which had attained the seriptual height of four-score years.

"A crowd gathered, among them my playmates and I," Mrs. Otte related. "After a lengthy conference, the mob moved about one half mile west of town as `the village creek.' The boy was forced to gather wood for his own funeral pyre, built in the shade of a large-pecan trove. Then the boy was fastened to the trunk of the tree. A number of men stepped forward and…

Two dashing young men filled with good humor and friendliness, never untrue to their neighbor, trust, and two, beautiful horses, trained by their young masters to entertain with unusual tricks the young folks of the little community -- this is the picture painted by the Rev. Jas. A. Hyder, Methodist preacher of Abilene who knew Jesse and Frank James, the notorious Missouri outlaws. This is the contrast to the numerous tales with which schoolboys have for years been entertained in which these brothers were pictured as desperate out laws with never a good quality.

The Abilene minister knew the James boys during their younger days and was the pastor of their mother for a while. He remembers vividly the tricks which the two trained horses of the boys performed for the amusement of the young people who filed out of the little country church after the weekly worship. The Rev. Mr. Hyder also was one of the men to identify the body of Jesse James after he was killed. This is his story.

The Tragedy of the Perdenales

There is perhaps, no more touching tragedy to be related of Texas frontier life, than that which occurred the 8th day of August, 1864, at the head of a draw which is one of the sources of the Perdenales River, in Gillespie county, where the town of Harper is now situated. Comanche and Kiowa atrocities were usually of the most savage form in frontier days in this part of Texas, but this account describes what may have been the most brutal of all. Not only because the bloodshed which happened upon the Taylors and Macdonald’s, but the account follows to describe what a tender mother had to endure while in captivity, with the brutality directed at her helpless children and she was forbidden to intervene or help in any way. It is a gripping account of brutality and bloodshed.Further Mentions: Characters: Matthew Taylor, Caroline McDonald, Eli McDonald, Mahaley McDonald, Becky Jane McDonald, Jim Taylor, Zed Taylor, James Taylor Jr., Alice Taylor, Dorcas Taylor, Clementine Hays, Billy Hudson, Pete Hazelwood, Monroe Heron, Charlie Nabors, John West, Locations:: Perdenales River, Gillespie County, Harper, Llano, Wedekin Store, Doss Ranch, Stark Ranch, Squaw Creek, Spring Creek, Little Devil’s River, Mason County, Fort Sill, Threadgill Creek, Kerrville, Banta Branch.

Melindy Harris the sole survivor of the Methodist Church in Indianola came into possession of the old bell that survived the storms of Indianola, both of 1875 and 1886.Further Mentions: Characters: Melindy Harris.

Author J. H. Faubion sketches occurrences of an early date (1867), in Kimble County. He relates specifically, events occuring around the region of a ranch owned by Dr. John McSween on Comanche Creek, a few miles south-east of Fort Mason. At this time, the ranch was then under control of Mr. Adam Keller, who at that time was sheriff of Mason County. He, along with a Mr. Nixon of Kimble county also had some of Dr. McSween's cattle on his Kimble county ranch, which was about four miles west of the junction of North and South Llano rivers.Further Mentions: Characters: Dr. John McSween, Mr. Nixon, Mr. Johnson

The City Of Kent

In 1850, The English Universal Immigration Co. bargained for a body of land of 27,000 acres in what is now known as Bosque County, then Milam County. In the latter part of 1850 or 1851, they sent out about thirty families of immigrants and landed them at Galveston. Sir Edward Belcher and Sir C. F. McKenzie of the British Navy came out with these families. Captain Pidcoke and his family were in this colony also. Captain Pidcoke had a lovely daughter, and on this voyage an Episcopal clergyman performed the ceremony that made her the wife of Captain McKenzie.

Richard 13. Kimball of 49 Wall Street, New York, sold the English this tract of land which had a frontage on the Brazos river of thirty miles, including the noted Kimball's Bend. That was what old Texans called a rainy winter and in pioneer days that phrase had a meaning all its own. The colonists had a fearful journey overland, after they left their boat, as they were traveling in ox-wagons. So miserable was the experience that several members abandoned the company and accepted positions in Brenham, Cameron, Waco, and other towns along the way. Only those of the greatest pluck and hardihood and a love of adventure made their way to the new home, about fifty miles above Waco, which was their nearest trading post. A feeling of safety came over them when they discovered that ten miles from their destination was one store and a fort, consisting of two companies under Major Arnold and Dr. Steiner. The lonely wayfarers made their first settlement at a large spring 11 1/2 miles below what is now the town of Kimball. Here they laid off in proper form the City of Kent, TX.

The Beautiful Grey Horse Of The Plains

I have had some inquiries about a wild horse which used to range along the Kansas and Colorado line, so I will tell the readers of Frontier Times what I know of this beautiful animal. I was catching wild horses in that section of country in 1868, and I saw this horse very often. He was never seen with other mustangs, but was always alone. When I first saw him he was a beautiful gray, with long mane and tail, and I often ran him to try to rope him. I always rode the best and fastest horses I could get, but I never rode one which could make this splendid wild horse break a pace. He kept drifting south, through No Man's Land and New Mexico, and the last time I saw him was when I was carrying some dispatches from Coleman county to Company At Menard in 1874, I came upon him about twenty miles east of Menard, and immediately recognized him as the same horse I had so vainly tried to catch five or six years before, although he was almost white. I took after him and ran him for quite awhile, but, as usual, he out-distanced me, and not having time to tarry long, as the dispatches had to be delivered, I resolved to return and make another attempt to catch him. This is the story. Includes old photo of the author

By Hugh Nugent Fitzgerald (Includes a photo of Ben Thompson)

Truth is stranger than fiction. Tradition for the most part is a musty old liar. A thousand writers have written stories of the noted Ben Thompson and his encounter in the long ago with Captain James E. Lucy. A thousand newspapers have published these stories. No two stories were alike. - They were not based on facts. They were more than 75 per cent imagination with a garnishment of tradition. Indeed the real story has never appeared in the press of Texas or the newspapers or magazines of America. Ben Thompson was shot to death long ago. Those who were eyewitnesses to the famous run-in are sleeping their last sleep, with one exception, and that exception is Captain James E. Lucy, the hero of a thousand tales. He is in the land of the living. He has been on a bed of pain for months. Now for the first time he has given the story, with its details, just as it happened. He was not a peace officer when the encounter occurred. Ben Thompson was not a peace officer. Ben Thompson was the proprietor of a gambling house on the avenue in the capital city. Captain Lucy was engaged in private business, which called him to Mexico and elsewhere. From the hour that the melee took place until a very recent date Captain Lucy ignored all the tales that were written and all the fantastic descriptions that have appeared in the newspapers of Texas and elsewhere throughout the years.

The Truth About Wild Bill

Frontier Feudists Were True To Friends

TEXAS bad men who became so famous throughout the nation for their gun plays were at heart the best men and were thrown into feuds because of surrounding conditions, according to V. O. Weed, longtime resident of Austin during frontier times.

Mr. Weed, was the intimate confidant of many Texas pioneers who gained renown for their fends.

"They were the best of fellows," Mr. Weed said. "Those men, and I've known lots of them, would stand by their friends through thick and thin, and they were not bad men at all. They were forced into using guns by accident or by conditions. They started feuds because they had to and not because they liked fighting."

Mr. Weed, as he explained, was speaking of the men who were known as feudists and not of the desperadoes who were bad men for commercial reasons.