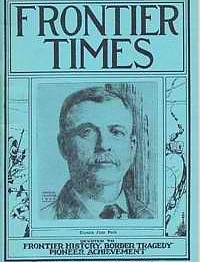 Murder of Mr. and Mrs. Riggs and Mr. Pierce

Account of the murder of Mr. and Mrs. Riggs and a Mr. Pierce by Indians in Bell county in the Spring of 1859. A new settlement was being formed in the northwest part of Bell county near Sugar Loaf Mountain by homesteaders and newcomers who were not familiar with Indian warfare. Mr. Pierce, Mr. Riggs. Mr. Elms and a few others lived in that particular settlement, near Sugar Loaf Mountain.

Conditions at Eagle Pass In 1892

In 1892 Eagle Pass, on the Rio Grande, was a wide-open town, boasted of many saloons and gambling houses, and reflected the conditions as they existed in all border towns at that time. Here is an account of a fiery Methodist preacher who decided to preach in the saloon while surrounded by revelry and debauchery.

Among the most notable of that great class of true men who adorned the ranks of the Texas Rangers in frontier times, was Captain June Peak. Captain Peak saw hard service on the Texas border for many years, fighting Indians and outlaws. He and his company of Rangers ran to earth the noted outlaw, Sam Bass, who was killed at Round Rock in 1878. He was in numerous battles with the Indians, especially at Round Mountain, and Bird's Creek, was wounded three times and several times had his horse shot from and him. This article relates some of his more notable experiences.

On, the east bank of the Pecos river in the extreme western part of Crockett county, Texas, is found the sight of the old frontier post once known as Fort Lancaster, which was abandoned March 19, 1861. Here is the history of the old fort.

Reunion of the Texas Ex-Rangers

Interesting letter of Captain John Young, of Alpine, who recollects on early years and events in San Saba County and Gonzales Co.

Account of J. W. Bigby of Runnels County and his life as a cattleman on the frontier range during the 1880’s.

Indian Attack in Bass Canyon In 1880

Account given by Mr. J. J. Little, of Pearsall, Texas, well known ranchman of the Pearsall region, who also served as sheriff of Frio county for about eighteen years. He describes the murder of his sister, Mrs. Maggie Graham, by Indians in Bass Canyon May 13th, 1880. At the time the murder occurred Mr. Little was on the trail to Kansas with a herd of cattle belonging to B. L. Crouch and did not learn of the death of his sister until thirty days after it happened. When in Fort Griffin, Billie Henson, a friend, read an account of the attack in Bass Canyon in a newspaper, the San Antonio Express, he hastened out to the herd to carry the news to the brother. Mr. Little says that on the night before he received this sad news he dreamed a strange dream, wherein one of his sisters met him at the gate as he was returning, home and told him that Maggie was dead. Next day after this dream his friend brought the sad details of the murder.

Captain A. B. Ostrander, who was Stationmaster for the I. & G. N. R. R. at Tyler, Texas during the 1870's. He writes of how for a period of three months in 1867 he spent from two to four hours every day with old Jim Bridger at Ft. Kearny, on the old Bozeman Trail when he was only 20 years old.

WHO KNOWS OF THIS RAID?

Account of John Ware, who was born in 1839 in East Texas and came to the Sabinal canyon with his father, who died a year later, leaving him to care for six sisters, all younger than himself. With the courage that carried him through the rough places in life, he set about laying out his farm, the planting of an orchard, the building of a mill and engaging in early Indian fights around Uvalde. In 1861 he was married to Miss Elizabeth Fenley, the ceremony taking place in a fort in the Sabinal canyon. After her death several years later he married Miss Mattie Bates. This account describes these events as well as others in the region.

Very lengthy and detailed account. BALL'S RANCH was on the road leading from Decatur, Wise county, to Jacksboro. Fort Richardson was located at the latter place and was garrisoned by several companies of the Sixth U. S. Cavalry under Col. Paddy Starr. Ball's Ranch was several miles north or northwest of Decatur and some thirty-five or forty miles from Fort Richardson. It was a small ranch and until some years after the war, was the only habitation immediately on the Jacksboro road for a stretch of many miles. The following account of the raid on this ranch is furnished by, one of the participants in that struggle.

Let’s Build A Monument to The Texas Rangers

In 1860 there lived in Uvalde, Texas, one John Booker Bowles. He was a small man, about thirty years of age, a confirmed asthma ic, and he did not know the definition of fear. At that time he had a brother living in Belton, who had had trouble with certain parties there, and expected more trouble, so he wrote an urgent letter to Booker requesting him to come to Belton at once. He mounted a little half-broke mule and started for Belton at once. When he reached the crossing on the Sabinal river he found some twenty Mexicans bathing in the only water hole, and he had great difficulty in getting his mule down to the water's edge to drink. The Mexicans saw the mule was wild, and in a spirit of devilment they would splash the water with their hands, and make a great noise, and laugh heartily at Booker's attempts to urge his mule to the water. Being in a large crowd, naturally the Mexicans were impudent and saucy, and kept up their sport until the mule became thoroughly frightened and ran up the bank. Knowing the Mexicans were purposely scaring his mule, Booker called to them in Spanish to desist as he wanted his mule to drink, but they repeated the act every time he rode toward the water, and the third time it happened Booker drew his six-shooter and opened fire on the Mexicans...

Account of General Albert Sidney Johnson who often visited Fort McKavett in the 1850's. In October, 1849, Johnston was appointed paymaster in the army with the rank of major and assigned to the Frontier department of Texas. He had in service under him, a negro cook, Randolph. When Johnston’s account were repeatedly coming up short, investigation was made into the cause of the discrepancy.

Amos Alexander and His Son Killed by Indians

Account of Amos Alexander, one of the early settlers who came to Texas to better their fortunes, who arrived in the spring of 1833. He came from Pennsylvania and brought with him, his son, Lyman W. Alexander, about sixteen years old. After looking over the country he selected land in the valley of the Colorado river, a few miles above the town of Columbus, in Colorado county. This account describes the killing which took place about two miles south of the present town of Ledbetter, and the spot is now marked by a granite boulder.

Chasing the Murderers of Isaac Kountz

By John A. Miller

Account of one of the Indian raids that were made into Kimble County in December, 1876, in which Isaac Kountz and a son of Dr. Spears were both killed.

A Story of Buried Treasure at Austin

Account describes how the sum of $80,000 in buried gold after an eight-months' search following the uncertain lines of ancient maps, led to a creek bed a few blocks from the Austin business district whence a forty foot tunnel was constructed leading to the discovery of the pot of gold on April 13, and the fortune removed.

Mrs. Mary Phillips who was snatched in the mouth of a coyote from the road she traveled to El Paso when a baby, recalls the primitive days of the now great city of El Paso