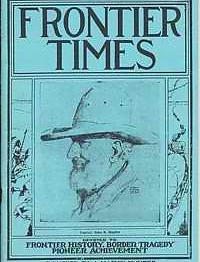 By W. A. Morris, Montague, Texas

Captain Hughes, Of the Texas Rangers

Account of Captain John R. Hughes, of Ysleta, near El Paso, Texas. For twenty-eight years he chased outlaws of high and low degree in the wild region bordering on the Rio Grande. He knew every curve and bend of the international boundary stream from its mouth to El Paso, more than twelve hundred miles; he was familiar with the haunts in the innermost recesses of the hills and mountains, where hardpressed bandits were most likely to seek refuge; he could follow the dimmest trail through the thick-growing chaparral of South Texas, knowing just where it was going to lead; he knew the name and history of every criminal who infested the border territory duing the time he served as a Texas Ranger. This of itself was no small accomplishment, considering the fact that the list of outlaws numbered well up into the hundreds, and probably into the thousands. When Captain Hughes would begin chase, it was certain to have one of two endings: Either the fugitives were captured or they were killed. This is an excellent story of the great man. Also includes 2 group photos of Rangers.

I was born November 15, 1860, in Madison county, Texas, and lived there until the break up of the Civil War. My father moved to Lavaca county, where he died in 1870, and his remains now rest in an unmarked grave at Hallettsville. My uncle, John M. Dawson, who, in after years, became prominent as a cattle baron, came down and moved us to Caldwell county, in 1872. We located on the head of Lytton Creek, on what was then called the McDonald Ranch. Lockhart was our trading point. That year I helped my uncle move two herds of cattle from near Columbus to Caldwell county. The following year, 1873, I helped him in getting together a herd of cattle to be driven to some point in Kansas. I helped to start the herd and went with him to the Colorado River. I then began working for Joe (Cedar Creek) Bunton, and worked with the Buntons for several years. I remember most of the old cattlemen, including the Buntons, the Blockers, Montgomerys, Ellisons, Withers, George Hill, Col. J. J. Myers, Old Man Ed Thompson, Oscar Thompson, W. B. (Bill) White, the Harris Brothers, Nat and Alvin Haynes, Arch Larimore, Berry Roebuck, the Murray Brothers...

A Texas Boy’s First Experience on the Trail

Account of the life and experiences of "Uncle Johnnie", John J. Long who was born in Fayette County, Pennsylvania, November 7, 1851. He came to Texas in 1874 with the General Nelson A. Miles expedition. He hired to the government at Leavenworth, Kansas, as a government teamster. Story includes the expedition started from Fort Dodge, Kansas, with thirty-six six-mule teams. They came south from Fort Supply, Oklahoma, and on south, across the Canadian near the mouth of oasis, thence down west of where Fort Elliott is now located and up McClellan creek. The expedition at this time, according to Uncle Johnny's story related shortly before his death, was after a bunch of Indians that had, won captured the Germane sisters.

Account of old Indian fighter Bill Heffington of Marble Falls Texas, who spent his youth in Parker County at which time was one of the battle grounds of the Comanches and the settlers. The writer was a neighbor of Bill Heffington for some dozen years when both boys were roaming the banks of the south Bear Creek. Stephen Heffington settled in what is now Parker County, Texas, about 1850. The Land Office records in Austin show that he patented 320 acres of land on the South Bear Creek in 1854. On this tract of land the Heffingtons opened up a farm and on the immediate north of the South Bear Creek about eighteen miles southeast of Weatherford. John Henry Taylor, father of the writer, patented a small tract adjoining the Heffington tract on the south and the two families lived as neighbors and friends from 1856 to 1870. This is an excellent account. Article includes a photo of Mr. Heffington.

One of four sons was Ab's part to do general ranch and farm work at home. The former was much to his liking, but farming had no part in his picture of the future. It was in 1876 that he tried his wings, leaving the home nest to work for his brother, John on his Blanco County ranch. Gathering and roping wild steers from the brush and mountains was the task mapped out for him and Blocker declares "It was a man's job too." The steers were driven from where they were captured to Lockhart Prairie, fifteen miles below Austin.

A dislike for seeming, bombastic enumeration of personal exploits, coupled with a gentleness to win a child, a gallantry and reverence for women, a sincerity of purpose, determined will and extreme contempt for a moral weakling. These combined with a sixfoot-two stature and simple dignity, enter into the making of one who has won his master's degree in the college of experience-life. This is the story of a good man of the frontier.

Concerning the article, "More About Sam Bass", writer J. B. GILLETT offers yet more information on just what happened at Round Rock that fateful day.

The Long Sought Placer Of The Malpais

RENEGADE slate outlaws; murderous San Carlos Apaches, descendants of Geronimo's band; rugged rock, such as nature throws up only in her most violent moments.

These three, outlaws, Apaches and rock, make up the unholy aliance bound together-in the common cause of keeping forever secret the exact location in the Malpais mountains of New Mexico of the Lost Adams Diggin's; fabled placer mines of untold richness.

Such, at least, is the belief of Alvin D. Hudson, longtime resident of El Paso, mining man, metallurgist, Owner of the Texas Turquoise company and last of a line of rugged pioneers.

Adventures and search for a hidden gold mine. Does it really exist? Find out for yourself…

At ninety-one, the greatest trail blazer of them all has entered upon another major adventure. Col. Charles Goodnight…several months ago married Miss Corrine Goodnight, 26 years old, of Butte, Montana.

The Indians in Polk County, Texas

Hidden away among the piney hills of Eastern Polk County lies a settlement of some 300 Alabama Indians. They live upon two sections of land granted to them in 1840 through the efforts of Sam Houston. These Indians left their home east of the Mississippi, where they were first encountered by De Soto about 1540, and started westward. When the Louisiana purchase threatened to subject them to the Anglo-Saxons, they again took up their march west. Records say that when they arrived in Texas they had a tribe of some 5,000 people, including 500 warriors. This is the story of the remnant of this once great tribe.

Mentions: Mr. Charles F. Doan, who conducted this store , the Old Time Trail Drivers at San Antonio, Texas, , J. Doan , Fort Sill , The first house at Doan's was made of pickets with a dirt roof and the floor of the same material.

Three Months among the Indians

This fascinating and descriptive first-hand account was written by the man who experienced this unimaginable trial, Ole Tergerson Nystel, who was born in Henderson county, Texas January 4, 1853. His parents immigrated from Norway, to Texas in 1848, first settling in Henderson county and then later in Van Zandt county, and finally settling in Bosque county in 1866. It was at age 14, on the 20th of March, 1867, that his captivity by savage Comanche Indians took place.

Comanche! Dreaded name. Synonym of all that is cruel and barbarous. What terror that name inspires along the defenseless frontier. And it was amongst these monsters in human shape that I had fallen a helpless victim. By this time I was suffering severely from my wound, but to this they paid no heed nor applied anything to alleviate the pain, but after a day or two when it had gotten thoroughly sore, they would carry it through a process of twisting and wrenching every now and then, I suppose to increase my already excruciating pain.

Just before sundown we came upon a negro man with a wagon. He saw us when a half a mile off and came running toward us begging for his life. At first they seemed disposed to heed his petition, but the thirst for blood triumphed over their better nature, and amidst his cries for mercy they stabbed him to the heart. He sank to the ground without a groan, save the death-rattle in the throat. One of them then pierced him through with his spear, it coming out at his breast. They left him unscalped and showed by signs and grunts their disgust for such a scalp, and pointed to my head as if to show by contrast the difference; and that to possess such a one would give them great pleasure.

They commanded me to laugh at this horrible deed, but you can imagine what a sickly effort it was, thinking every moment that my time would come next. However, they seemed satisfied with the effort for the time being sparing me, as I supposed, for some future occasion.

Account of Captain June Peak's last scout made a short time before he resigned the command of Company "B", Frontier Battalion. It was written by a man who was a member of his company at the time and with him on this last scout. This eventful final scout of Capt. Peak occurred on the 29th of March 1880, when Captain Peak with ten men left Camp Hackberry Springs, Tom Green County, for Big Springs, Howard county, distant 30 miles. It is described in this story.

The Coming Of The Railroad

There was a real "big day" in San Antonio a long time ago-on Feb. 19, 1877. At 4:30 o'clock that afternoon the first train steamed in down Austin street-and stopped beside a temporary platform built on the site of a proposed depot. It was as impressive an event as the landing of Noah's Ark must have been, a long time before. This is the story.

The Panhandle is not without its full chapter in the romance of the Southwest. And it is not without its "San Jacinto," the bloody conflict of Adobe Walls, a decisive battle which determined that the white man, not the Indian, should predominate the fertile plains country. But Adobe Walls is far in time and place from San Jacinto and the Alamo, and historians have not infrequently overlooked the chapter that would tell how a little band of Americans stood as resolutely against overwhelming odds as did Crockett, Bowie and Travis at the Alamo to win the San Jacinto of the Plains-but only after they had narrowly averted the fate of the heroes of the Alamo.

Among them none was more intrepid nor a better marksman than the late William (Billy) Dixon, frontiersman, buffalo hunter, and later a scout. This is his story.