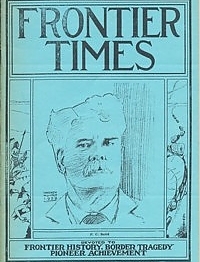 ONE OF THE OUTSTANDING characters of early days in Southwest Texas is P. C. Baird, of Mason, Texas. Before going to Mason county, Mr. Baird was a member of the Texas Rangers, and had many thrilling experiences. He was known for his absolute fearlessness in the face of danger, and of his ever readiness and willingness to go where duty called him. Mr. Baird became sheriff of Mason county and held the office for sixteen years, and during the time he had to contend with all sorts of lawless characters, but he was the man for the place and few outlaws escaped his persistent trailing. So active and so successful was he in running criminals to earth that he was nicknamed "Old Sleuth." This is his story.Characters: P. C. Baird, John C. Butler, Old Man Braigiham, Wm. Schuessler, John B. Bell, J. V. Cunningham, John Formwalt, Co. W. T. Melton, Locations: Mason, Mason County, Green Lake Water Hole, Edwards County, Gillespie County, Eden, Concho County, San Angelo-Paint Rock Road, Runnels City, Runnels County, Mcculloch County, Dry Brady Creek, Blanco County, Tom Green County, Howard County, Big Springs, Pecos City, Toyah, El Paso, Fort Worth, Menard County, Menardville, Waco, Austin

Mr. Ira L. Wheat, of Rocksprings, Texas, writes: "I see an article in your January number in regard to the killing of the Coalson family. Now, I lived at Barksdale at the time, and the Indians came to my place the next morning after killing the Coalson family and got all of my horses, and when I got them back one of the horses had on Mrs. Coalson's side saddle. But that article was the first that I ever heard of the burning of the bodies. S. B. Rainey was there and pulled the arrows out of Mrs. Coalson's body, and kept them for several years. The same party of Indians came in, the next year and killed the Lauren family on the Frio, just above where Leakey is now situated, and Captain Bulliard of Fort Clark followed them into Mexico and killed the entire bunch except one woman. I do not think Lawton or Wellk had anything to do with it. Mr. S. B. Rainey lives at Uvalde and was talking with him a few days ago about this article. I do not know this man Wells, but I know Henry and Bell well, also Whitecotton."

Memorial to the Pioneer Woman

Account of Edwin Knudson, Pioneer from Wyota, Lafeyette County, Wisconsin who loaded his family and all of his belongings on ox-team wagons and joined the crowd of gold-diggers in the early spring of 1854 via the Oregon Trail. He eventually settled in Comanche, Texas in 1876, and drove stage for the Chichester Stage co. from Comanche to Fort Worth. This is his story, and it includes an excellent old photo of Mr. Knudson.

By L. A. Chanslor

For three years after the organization of Bell county and in the year 1856, there was a decided movement of the Mormon Church in Salt Lake City, Utah to gain converts to the Mormon faith. After a report of local conditions in Texas, it was decided to establish a settlement in the western part of Bell County. After being run out of the frontier town of Belton, the Mormons settled into an area known as McBryde Crossing, where hostilities soon fired up and focused on a murderous conflict between Howard and LaNier. This is the account.Characters: Brigham Young, Howard Family, LaNier, Locations: Bell County, Belton, Nolan Creek, Lampasas River, McBryde Crossing, Youngsport, Crossville

Among the men who have contributed to the building of a cattle empire in the Big Bend of Texas, whose names are indelibly written into its early and stirring history, and whose personalities are woven into the web of all its progress, none are more outstanding than W. W. Bogel, familiarly known as Judge Bogel, one of the largest stockmen in Presidio County, and a resident of this section since the early 1880's. Judge Bogel came to the Big Bend when there were no wire fence west of San Antonio; he was here when ranchmen first began fencing their land and boring wells for their stock, and when Marfa's population was less than a hundred, its railroad station a box car, and the town boasted of one store, one hotel and postoffice, a Chinese restaurant and gambling hall, and a few adobe shacks. Here is his story.Characters: Judge William W. Bogel, Augustus J. Bogel, Julia W. Bogel, Judge Noonan, George Dougherty, D. A. Crichton, John G. Davis, Hi Kelly, James P. Ellison (Col. Jim Ellison), Miss Sarah Newton, Col. S. G. Newton, Mrs. Jesse Hubbard, Locations: Presidio County, Marfa, Big Bend, San Antonio, Jeff Davis County, Brewster County, Medina County, Todos Santos Creek, Frio County, Maverick County, Alamito Creek, San Esteban, Rio Grande, Pecos River, San Antonio, Chihuahua

WHEN ITURBIDE, the first independent ruler of modern Mexico, as Emperor Augustin 1, was executed on July 19, 1824, at Padilla, State of Tamaulipas, the sinister figure of Santa Ana came into view with his "pronunciamiento," at Vera Cruz, in favor of a republican form of Government. Not strange, since his selfseeking activities aided in ruining the erstwhile Emperor.

John Selman, the slayer of John Wesley Hardin, and Bass Outlaw in El Paso, was a noted frontier character. He was about fifty-eight years old when he was killed at El Paso, Texas, April 5th, 1896, by George Scarborough. It is said that Selman, in his day, killed not less than twenty "bad" men. This brief account includes a photo of Selman.