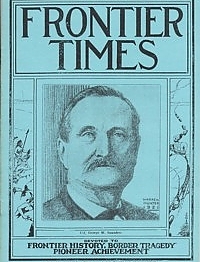 One of the outstanding characters among the pioneer cattlemen of Texas history is Colonel George W. Saunders, of San Antonio, past president of the Old Time Trail Drivers' Association, and at the head of the George W. Saunders Live Stock Commission Co., with offices in San Antonio, Fort Worth and Kansas City. Colonel Saunders was one of the most widely known cattlemen in the United States – This is the story of how the legacy began.

When The Mormons Came To Texas

LARGELY UNKNOWN to the people of Central and Western Texas today, the history of a group of eastern Mormons who settled near Austin in 1846 reveals the story of a people with peculiar religious zeal, and a pioneer industriousness that became recognized as a leading factor in early Texas development. Their story is a rugged romance, closely associated especially with the early history of Austin and Fredericksburg. Their story is recalled today only by a few acquainted with legends hovering around the suggestive ruins of their colony across from Mount Bonnell, four miles north of Austin, and the remains of their dwellings and mill sites near Fredericksburg and in Burnet County. In this Gillespie County settlement, four miles below Fredericksburg, and known to the Mormons as the City of Zodiac.

Kind friends, you may ask what makes me sad and still?

What makes my eyebrows darken like, a cloud upon a hill?

Rein in your pony closer while I tell a sad, sad tale

Of Utah Carrol, my partner, and his last ride on the trail.

'Mid the cactus and the thistle of Mexico's fair land, -

Where the cattle range , by thousands of many a mark and brand,

In a grave without a headstone, without a date or name,

Quietly sleeps my partner in the land to which he came. ,

Long, long we rode together, had ridden side by side;.

I loved him as a brother and wept when Utah died;

Long, long we rode the ranges, threw ropes and burnt the brands

In dark and stormy weather we gained night herders' stands.

While rounding up one morning-our work was almost done

The cattle quickly started on a wild and maddening run;

The boss' little daughter, while riding at one side…

By Walter B. Wilson

Account of the origins and earliest history of that county designated as "Collin" in honor of Collin McKinney, the most distinguished citizen then residing within its newly formed boundary limits. Collin McKinney was one of the fifty-six signers of the Texas Declaration of Independence, published to the world on March 2, 1836. His surname "McKinney" was also destined to be given enduring fame in the naming of the permanent seat of justice when it was subsequently located at McKinney two years later by special enactment of the second legislature of the new-born Lone Star State.

The Revenge Of San Antone
By J. Marvin Nichols

IN THE YEAR 1850 Gen. Antonio de Lopez, a native Spaniard of Cuba, visited the United States for the purpose of getting aid to help the natives of Cuba to throw off the Spanish yoke of tyranny and oppression. Gen. Lopez was greatly encouraged by his native people of Cuba, and promising him to battle with him for the freedom of Cuba, they sent Gen. Lopez to the United States to solicit aid. So he came and secured the sympathies and cooperation of the noble and brave General, Crittenden. Soon Gen. Crittenden had enlisted 5,000 brave young Southern American men. It was a jolly little army of boys, all expecting to win great distinction and honors as American heroes. I numbered one among the jolly boys of the little army of Gen. Crittenden's filibusters. I had built many glittering castles in the air, had unbounded expectations. At that time I was a cadet at the Kentucky Military Institute; was at home in Mississippi, on a furlough when I heard of Crittenden's recruiting. I ran away from my guardian and joined the filibusters. So we were soon organized and embarked for Cuba. After three or four days and nights' tossing over the great deep seas and riding the great billows, rolling like mountains, causing our ship to do the bucking like a wild Mexican mustang, the snug doublemuted schooner was going first on one end and then on other, and occasionally she would add a rolling from side to side. Never were so many young soldiers so seasick in one ship. They all were so dreadfully seasick that they never once thought of the danger we were in, as our ship was very likely to "founder", meaning going to pieces… Characters: General Antonio De Lopez, General Crittenden, Captain John G. McAdams

Account of a trail drive in 1878 that the author and his brother-in-law made to drive cattle from Jefferson, Texas, to his ranch on the Red River in Cook County. The route took the men through Upshur County, Pittsburg, Sulphur Springs, Old Kentucky Town, Whitesboro, and Gainesville-then a typical cow-town-and on to the ranch. This is his description of the area at that time.

One of Kimble County's early pioneer citizens, N. C. Patterson who settled in the Kimble County area in 1868. Note: THIS IS EXCELLENT KIMBLE COUNTY EARLY HISTORY AND GENEALOGY

"We found the wild honey galore. Much wild game from buffalo down to jack rabbits, turkey, deer, bear, wolves and Indians. Fish from the size of a sardine up to 75 and 80 pounds, but all bread stuff had to be imported from Mason or Fredericksburg. The first day we landed in Kimble County we pitched our tent near where the town of Junction City was located, between sundown and dark. We could hear the wild turkey flying up to roost in the tall timber along the rivers. Next morning a little before day, three or four of us decided to see if we could have turkey for breakfast, so we went to spy the enemy on the roost in the darkness. We all became separated; about break of day guns began to be heard in different directions. Neither of us was certain whether the other had bagged any game. About sunrise we all met at camp, each having about four apiece. Anyway 16 turkeys were unloaded in camp-enough to last a week or two. So no more turkeys were shot for many days, though one could see them in bunches of 50 to 200 every day. In those days a man did not have to be a nimrod to get all the meat he needed. We all made it a rule never to kill any kind of game unless needed. Bear have been within a mile or so of Junction. Back in the eighties the havalina hogs were plentiful, but not fit for eats."