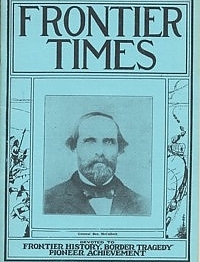 ONE of the early Texas characters; whose name was emblazoned on the scroll of fame by his deeds of valor and heroism, is General Ben McCulloch. He was a native of Tennessee, and came to Texas to participate in the Revolutionary struggles. He enlisted in the Texan army as a private, but was ordered to the command of one of the cannon in the battle of San Jacinto. In 1840 he represented Gonzales county in the Texan Congress, but most of the time was on the frontier as captain of a Ranger company. This is a short narrative of his life and of an account of an Indian raid into Gonzales county in May, 1841, and pursuit of the Indians by Ben McCulloch and a party of citizens.

Apaches attack two boys herding cattle on Gallina creek. They were the sons of Jack McCain and were aged 14 and 15, respectively. The eldest boy was killed and the younger was taken captive after putting up quite a, battle with sticks and rocks. The Indians tied their captive on a horse and started north. This was all done in one day. This is the story of the captive boy.

In the winter of 1869, there lived in Comanche county, on the west side of Resley's creek, about two miles from the confluence of that stream with the Leon river, two miles east of where Lamkin now stands, Mrs. Ewell, a widow and her two sons, Tom and Charlie. One day in the early winter, the widow and her son, Tom, Charlie, the younger, being absent, ate their dinner, covered up the fires, closed the doors, fastened the yard gates and walked one and a half miles away to a neighbor's house. Soon after they left home a party of 19 blood thirsty Indians rode up to the house, dismounted and soon commenced the work of pillage and destruction… This is the story of that raid.

Recollections Of The Sheep Range

Excellent history of the area halfway between Frio Town, the county seat of Frio county, and Uvalde where the author of this article had a ranch and engaged in the sheep business. This is his story. Contains old photo of Mr. James.

JOSIAH PUGH WILBARGER, pioneer of the Middle Border and further Southwestern Border, was one of the Kentucky-Missouri Colonists that came in with Stephen F. Austin's second colony in 1827. He became a successful and wealthy land owner until the day when his life was rearranged permanently by the brutal act of savage Indians who tortured and scalped him while he lay wounded.

"Most persons, when thinking of Indians scalping people, believe they tear off the whole scalp; but those Indians cut off pieces of scalp about the size of a dollar. They took seven pieces of scalp from the head of Mr. Wilbarger. He said, every time they cut and tore a piece off his scalp it sounded like the pealing of loud thunder, but it pained him very little, as he was paralyzed and numbed by the arrow in his neck. The Indians stripped most of the clothes off the bodies of the two white men and left them for dead.

Mr. Wilbarger soon lost consciousness but came to again about the middle of the afternoon. The blood was still oozing from the scalp and he was covered with clotted blood. He managed to extricate the arrow from his neck. From the great loss of blood he was famished with thirst and very weak, but he began to crawl toward a nearby stream. He finally reached it, drank and lay down in the water to soothe the fever which had set in. He lay in the water a long time and became so chilled and weak that only with a supreme effort was he able to get out onto the bank. He then went to sleep from exhaustion and awakened near nightfall. By this time the flies were swarming about the wound on his, head and Mr. Wilbarger was much alarmed and decided that he would try to crawl to the Hornsby place, eight miles away. He managed to drag himself about a mile to Pecan Springs, but was so exhausted that…"

Account is of the author, Mr. D. L. Kokernot who was born in the City of Amsterdam, Holland, in 1805 and came to the United States with his father in the year 1817. He was apprenticed at the age of 12 years to Capt. John Summers, as shiip captain, and spent his life in that trade. He recounts many amazing and life-threatening experiences shipping off the coasts of Texas in the early 1800’s.

Account records origins and membership roster of the Montell Guards, a minute company formed in 1881 for the protection of that frontier region west of San Antonio against Indian depredations, and for the enforcement of law and order and protection of life and property.

Deed Of A Frontier Hero

Account of an almost unknown frontier hero, name of Carl or perhaps Carlton, who fearlessly charged through a savage horde of Indians, being shot at from every side, while he returned the fire with a sixshooter as he fought his way toward a little band of whites, who were making their last bloody stand.

A Cowpuncher Of The Pecos

Account of the Buffalo Wallow Indian battle which occurred in Hemphill County, on a divide between the Washita River and Gageby Creek, 22 miles south-west of Canadian and about 16 miles north of Mobeetie. At this place September 12th, 1874, William Dixon and Amos Chapman, scouts, and four enlisted men, Sergant Z. T. Woodall, Company I, Peter Rath, Company A; John Harrington, Company H; and George W. Smith, Company M, Sixth Cavalry, were surprised and surrounded as they were carrying dispatches from General Nelson A. Miles' camp on McClellan Creek in the Texas Panhandle, to Fort Supply, Indian Territory, and held for 48 hours by a band of 125 Kiowa and Comanche Indians, fully armed and on the warpath. This is the story.

When The Work’s All Done This Fall

Touching poem about an old cow puncher preparing to meet his Master.

"…When the work's all done this fall Boys,

The wages I have earned,

For I am now afraid, boys,

My last steer I have turned.

I hear the Master's call;

And I'll not see my mother

When the work's all done this fall.

"George, you may have my saddle;

Bill, you may have my bed;

Jack, you may have my pistol

After I am dead;

But, boys, think of me kindly

As you look on them all,

For I'll not see my mother

When the work's all done this fall…"

An old photo that was taken at Goliad, Texas, in 1873, and shows John King Fisher on the left, and. John H. Culp on the right.

Account of long-time San Angelo area cattleman, Dan Budd, whose father, W. M. Budd came to Texas in 1852, and settled in Lamar County near the Pinhook Settlement, four miles south of the city of Paris of today, founded by one Mathias Click. Here Dan was raised and given a love of the cattle industry and decided to strike out on his own in the San Angelo area. This is his story.

Detailed account of the killing of notorious gambler and gunman, Ben Thompson, and his companion King Fisher.

Dr. Ashbel Smith, and His Home Near Houston