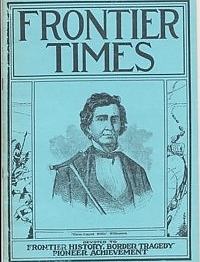 Robert M. Williamson is fondly remembered in a speech by Hon. George Clark of Waco. Brief account of his life and works. Mentions: a daughter of Col. Edwards of Wharten county Archer and Wharton

Description of Fort Stockton as it was in the early 1800’s. Fort Stockton was of strategic importance and was one of the chain of forts along the Texas border which, before the Civil War, included Fort Bliss, Fort Davis, Fort Stockton, Fort Chadburne, Camp Cooper, and Fort Belknap. A line of forts ran Southeast from Fort Stockton and included Fort Lancaster, Camp Hudson, Fort Inge at Uvalde, Fort Clark at Brackettville, Fort Duncan at Eagle Pass, Fort McIntosh at Laredo, Ringgold Barracks at Rio Grande City, and Fort Brown at Brownsville. The fort also was instrumental as a supply base for those enroute to the gold fields of California.

Vinton Lee James tells of hunting, horses, and encounters with hardship, disease, and Indians among the pioneer settlers along the Neuces River, the Sabinal and in Frio County and elsewhere. Here is a lengthy and excellent article with good history of these areas.

Days Of Peril On The Frontier

Account of Charles P. Haynes, Ranger and notable Indian fighter who, when a mere boy, came with his father Charles Haynes Sr. from New York to Texas in 1836. Young Haynes was born in Gonzales County, July 30, 1845. At 6 years of age he moved with his parents to Lockhart; after a few years he moved with his father out into the southern part of Llano County (Blanco County after 1858) and settled in the old Comanche or Crownover neighborhood, where for the most part Mr. Haynes lived his eventful life. This is his story. Includes a photograph of Mr. and Mrs. Charles P. Haynes.

Account of two very colorful characters, Hays and Doboy (Doughboy) Taylor. Their Confederate service was on the Texas frontier, in a company of rangers commanded by their father, who himself had served under the noted scout and ranger, Jack Hays, and had thought so well of that commander as to name his older son after him.

The Fight At Cibicu Creek, Arizona

Col. C. C. Smith tells of the fight with Apaches.

THE LAST DETACHMENT OF INDIAN SCOUTS

John Young of Alpine, Texas tells of famous Indian chief, Geronimo, and comments on many past Frontier Times articles.

NOTE: (Curiously, the first five lines of this article are printed in the wrong order. It should read, "I spent the winter of 1879 and 1880 in what was then called Middle Gila, above where Duncan, Arizona, is now located. We got our mail at a place called Richmond, Arizona, near the Arizona-New Mexico line." Purchase this magazine to read the rest of the story and many, many more exciting tales of frontier adventures!)

On the night of the 18th of December, 1854, the first two settlers of Comanche county, Jesse Mercer and F. M. Collier, struck camp in a liveoak grove one mile east of Dr. Geo. W. Montgomery's place.Mentions "The first furrow plowed in the county was done by B. J. Holmsley in Tom Wilson's field. The first cabin was built by F. M. Collier The, first child was Thomas A. Collier, born May 30; 1855 C. H. Isham The first man killed was J. H. Foreman The first marriage was Elias Deaton and Pollie Wright The first sermon was preached by B. F. Kemp, Methodist The first Indian depredation occurred in 1860, when they stole a number of horses from Adams, where Tatum's field now stands Fred S. Millard James A. Jasper Tarrant county Hon. Frank Bushick Pat Wolfforth, Pioneer Cattleman the Diamond Trail ranch Tom Platt John W. Bracken