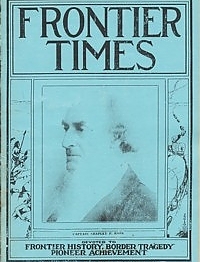 Captain Ross is remembered as the settler who "did more to free Texas from hostile Indians, rendered more valuable services to the commonwealth over a longer period of time, and is more generally and affectionately remembered" than any other. A brief life history.

The Pioneer Harrises Of Harris County

John Richardson Harris was one of Austin’s first 300 colonists and founded the town of Harrisburg. The story of his life, his family, and his town. HERE IS EXCELLENT VERY EARLY HISTORY OF HARRIS COUNTY, TX.

PHOTO OF A VALUABLE COW

OLD photo showing a good old family cow on the ranch of John Lackey, north of Menard, Texas. This cow mothers the orphan kids and lambs on the Lackey ranch, and makes no objections to the duties which are imposed upon her, This photo was made by N. H. Rose.

This article describes the feuds between several pioneers, and subsequent shoot-outs and skirmishes. It focuses on the trouble between Jim Pace and Frank Feichs.

KARNES COUNTY is sixty-five miles scuth of San Antonio and was named in honor of Henry Karnes, one of the men under Fannin, shot at Goliad on Palm Sunday, 1836. The county has an area of 740 square miles. The first settlement was made on San Antonio river about the year 1857, and the place was called Helena. The San Antonio & Aransas Pass Railroad was built through Karnes county in 1885 and the county seat was moved from Helena to a point about six miles to the west and the new county seat was called Karnes City. The town of Kenedy is six miles south of Karnes. City and was named in honor of Capt. Mifflin Kenedy, the man who furnished the money which Col. Uriah Lott, the contractor, built the railroad. Until the coming of the railroad Karnes county was devoted mostly to the cattle industry. In fact previous to the Civil War this was about the only industry worth while in all the section of Texas, now known as the southwest.

The story of Hernando Cortez and Bernal Diaz and their Mexican victory.

D. L. Kokernot remembers his many adventures among which was meeting General Sam Houston, sickness, storms, battles, and Indian kings.

The Buffalo And His Habitat
C. C. Rister

Seven Links In A Chain

A sequence of grisly events involving six human lives, their connections, and individual tragedies. The events involved Billy Coran, an ordinary cowboy who claimed to be from Texas; a Mexican named Bodina, who was so bad that, he was afraid of himself; John Wesley Hardin; Harry Brown; City Policeman John Sellman; Deputy United States Marshal George Scarborough; Bill Franks, alias Bill Carver, who was a member of the well known Hole-in-the-Wall gang; State Ranger Birchfield, etc.

Served As A Texas Ranger

S. P. Elkins speaks of his service as a Texas Ranger.

On the 21st day of July. 1872, there came to Coryell County a family consisting of the father and mother and six children - four boys and two girls. This family settled on the ground. This was not a very hard stunt as there was ground in every direction as far as the eye could see. The place settled by his family was on the head of Cave Creek, about ten miles northeast of Gatesville. (The reader will please keep his or her seat and not become impatient as I am almost ready to dismiss all of the above family but myself as I am the only one of the children who ever became famous-the others making just plain, hardworking, law-abiding citizens.) The country where this family settled was one of the most picturesque mortal man ever flapped his eye on. Oh, if that family could only have exchanged a few hundred square miles of "picturesque" for a few bodily comforts how much plumper and fatter would the hero of this tale be at this very moment…

Further Mentions: James Hayes Quarrels When my father moved to Cave Creek there were not exceeding five houses on the road from old man McGee's house, two miles west of Coryell City to Jonesboro, a distance of twenty miles. Our nearest neighbor was Judge McCuthen's family. Mat McCuthen, one of the Judge's boys was about my age and we were together a great deal

Williams Sparks relates the story of a pioneer named Parnall, who narrowly misses being lynched by furious mine workers.

Rev. Frank M. Buckelew, a local Methodist preacher. was a captive among the Lipan Indians for some time, being capured in Bandera county, Texas, on March 11, 1866, when he was barely fourteen years old. He was with the tribe in their wanderings over the mountains and plains of this state and in Mexico, and participated in their sports and hunting forays. He finally made his escape through the assistance of some Mexicans, and returned to his people in Bandera county….

John Gist Tells Of Changing Of The West

Account of his family’s travel west in covered wagon and establishing a home and business in the new west. Gist became one of the most successful and largest cattle ranchers and Hereford breeders in the regions around Midland, Odessa and Marfa, TX. This is his story.

Mentions: they finally reached Fannin County and settled on the Bois d'Arc (commonly called bode arc) near the present site of Bonham - There pa started his ranch things were going fine until Denton County got to looking so inviting from a distance that, notwithstanding Indians were raiding that section ever so often, he decided to give it a whirl, anyway The next stop was made two and one-half miles from Bolivar, in that county Uncle Isaac Denton Pa and Dan Waggoner decided to backtrack to the little town if Pilot Point, in the same county the old Chisholm ranch. near where the town of Roswell, N. M., is now located pasture in Cooke -County In 1885 I married Blanche Renfro at Era We went to Hall County, forty-five miles southwest of Memphis the Mill Iron pasture Wind River the J. J. herd, then owned by Mrs. Adair so I bought another 7,000 acres, paying cash again. This tract adjoined a water station called Stiles on the Fort Worth and Denver Railroad My Longhorns had increased to as fine a commercial herd as could be found in Hall and Donley Counties and numbered 800 head the cattle ranch of Hense Pegues the Henry M. Halff ranch of 4,000 acres, adjoining the town of Midland

I was among the early pioneers of Texas, my father coming to this state in 1852, when I was two years old. I was born at, Little Rock. Arkansas, July 29, 1850. When we arrived in Texas the country was practically unsettled, only a roving band of Indians, and a few white people. We had a great deal of trouble with the redskins, in Red River county, where my father first located. In 1862 we moved to Erath county, and landed in the McCarty and Gillentine settlement on the Little Defoe river. In July, 1664, after we had been living there over a year, I was mustered into service in Captain Gillentine's Minute Company. I was fourteen years of age when my service began. My brother, F. M. Sutton, was serving in this company also. We were sent out in squads of ten every ten days to scout for marauding Indians. and we had many skirmishes with them. In the Dove Creek battle, January 8, 1865, my captain, Gillentine, was killed. Lieutenant Cahee was also killed, by the side of John Gillentine. Bill Gillentine was wounded - and carried back to Erath county, where he partially recovered.