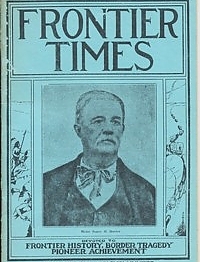 Account of the life of Major James M. Hunter, for many years a citizen of Mason county, and later of Edwards county. Major Hunter was born in Buncombe county, North Carolina, the descendant of an old and highly respected family. He came to Texas in 1851. In 1860 he was united in marriage to Miss Phillippine Keller, who died in Edwards county in 1885. This union was blessed by eleven children, Mrs. Laura Hamilton, Mrs. Emma Grandstaff, Mrs. Annie Boyd, Miss Ollie Hunter, James, John and Will Hunter and two infants having been called by death. Major Hunter died at the home of his daughter, Mrs. Hamilton, in Mason August 31, being at the time of his death 78 years of age. The details of his life are offered here in this excellent account.

Mentions: In 1852 Major Hunter organized a troop for the protection of the surveyors of the land in Peters Colony, which was in an Indian country with no white man living in it George Giddings and D. C. Giddings Tom Rife Sul Ross Captain Henry Davis' company of Texas Rangers Louis Schuetze a teacher, was taken from his house by a gang of those outlaws one night, a rope put around his neck and the old man was dragged to death a few miles from Fredericksburg four peaceable farmers on South Grape Creek, named Kirchner, Blank, Burg and Feller, were taken from their families one night and murdered and their houses pillaged the heads of the Perdenales and James rivers House Mountain the Southern Hotel County Judge of Mason county, and later surveyor of Mason county In 1876 he represented the Mason district in the State Legislature; after that he was. He removed to Edwards county in 1883, and helped to organize that county, was its first County Judge N. H. Rose

By James A. Jasper

Mr. Harper relates the details of his growing up in Tarrant county, Texas at the edge of the Cross Timbers, sixteen miles east of Fort Worth. He recounts early cattle drives out of the state, as early as 1856, contrary to what many affirm, as they suggest that drives were not made until the 1870’s.

Mentions: the Hole in the Wall Gang of outlaws the Suffolk Cattle Co., of Wyoming. Their ranch, the AV, was located on the Cheyenne river at the mouth of Lodge Pole Harry Longbaugh Our foreman, J. B. Crawford Husk, Wyoming

MY LAST BATH IN ICE WATER

It takes courage for a fellow to stand up before the public and acknowledge that he has been an impostor and liar for many years, but I now come before the public in all meekness and humility and acknowledge that for many years I lied most shamefully about taking ice water baths. For fifteen years I claimed to my friends that the first thing I did on awakening of a morning was to roll out of bed into a tub of cold water and advised them to do likewise. I told this so often and persistently that I finally got so I believed it my self and would have become grossly insulted if anyone had questioned the truthfulness of the statement. In all probability I would still be telling this lie, had fate not thrust the wife of my calm and peaceful bosom upon the scene.

How strange are the decrees of fate; who can tell when it is going to rise up and smite up hip and thigh? As I have said I had been rolling that "ice water before breakfast" under my tongue as a sweet morsel for many years when fate sent an inquisitive neighbor to our house…

Story of Hank Smith, a pioneering plainsman, who built the first home in the Staked Plains of Texas.

Reminiscences Of The Texas Revolution

These recollections of the Texas revolution were dictated by Andrew A. Boyle in 1870, just before his death, to his daughter, Mrs. W. H. Workman. This man’s account of the events is important in two particulars: (11 it adds another witness to the list of the Texas participants who have unanimously testified that, Fannin did not surrender at discretion, as General Urrea claimed, and (2) it gives a first hand account of the execution of the wounded prisoners at Goliad.

Winning The Coveted Medal Of Honor

Account of a veteran soldier who has a record for service, adventure, dangers encountered, and hardships overcome equaled by few- Lee Herron, in his service officially Corpl. Leander Herran, Co. A, 3d U. S. Fort Dodge, Kans.

Comrade Herron saw service in the Civil War, aided in the defense of the Santa Fe Trail and the early settlements at Fort Dodge, Kans., was with an American force at Baku, Trans-Caucasia, in 1878 (where he might have become a millionaire in oil) and is said to have the honor of being the only veteran at present in Nebraska wearing a Congressional Medal of Honor. This is his story.

The Traditions Of Fort Sill

Fort Sill, Oklahoma-once an outpost in the heart of hostile Indian territory, now the seat of the Field Artillery School where artillerymen are trained in the technical and tactical use of their branch--is alive with memories of the many Indian braves who sleep in simple graves in the post cemetery. The old guardhouse that is almost a dungeon stands a silent reminder of the seventeen long years Geronimo spent within its walls. The peaceful homes that dot the broad plains of Oklahoma are in themselves a tribute to I-See-O and Comanche Jack., The stories that repeated daily on the hills and plains keep ever alive the names of these and other Indians heroes.

Geronimo, the next of the traditional characters of Fort Sill, came on the military reservation in 1894 as a prisoner after a career' of pillage, which carried him through the territories of the Southwest and across the Mexican border, and led the United States Army into an endless chase of thousands of miles before he was finally captured.

Geronimo ended his days on the reservation, an object of interest to all, and hate to many, who had suffered from his cruelties.

Mentions: Per-mam-sue means "The Hairy One," Captain Marcy Lieutenant R. H. Pratt Terak-a-nee-cut, his uncle father-in-law, and Pah-po-ter-a-pert, his uncle; there lay Peah-ter-pe-who-noovy, leader of the band, and seven more of the best friends Permam-sue had ever had Moore L. Weaver Tex Brunton

The Regulators And Moderators

Account of a long-standing East Texas feud in the days of the Republic (1841 and 1842) between "moderators" and "Regulators" and the blood that mark this episode of Texas history. This event, known as the Regulator-Moderator War or the "Shelby County War," was a feud in Harrison and Shelby counties in the Redlands of East Texas from 1839 to 1844. The roots of the conflict lay in the frauds and land swindling that had taken place in the the lawless area between the American and Mexican borders. Hostilities rose to a tremendous pitch and a trail of blood was left to mark this notable period of Texas history. This story is exceedingly rich in historical detail of the area and times of the event, being some 20 or so pages in length. The author was witness to these events and gives graphic first-hand recollection.

TEXANS' PURSUIT WAS MEXICANS, BUT NOW IT IS CROP RECORDS: VISITOR'S IMPRESSION OF STATE

In the lobby of the Wharton Bank and Trust Co. hangs the following impression of Texas, written and signed by "A Texas Visitor," and since reproduced in various periodicals:

"Texas occupies all the continent of North America except the small part set aside for the UnitStates, Mexico and Canada. Texas owns all the north of the Rio Grande, the only dusty river in the world; also the only one, with the possible exception of the Trinity, which is ...

"Texas is bounded on the north by 25 or 30 states, on the east by all the oceans in the world but the Pacific, and on the south by the Gulf of Mexico and South America, and on the west by the Pacific Ocean, the Milky Way and …

"If all the Texas steers were one steer, he would stand with his front feet in the Gulf of Mexico, one hind foot in Hudson Bay and the other in the. Arctic Ocean, and his tail would brush the mist from the Aurora Borealis. Some state?" -San Antonio Evening News

GRAVES ON THE FRONTIER

David Crockett Of Tennessee And Texas

Born in East Tennessee, on the Nolachucky river, in 1786, a son of John Crockett, revolutionary soldier; a grandson of David Crockett, who emigrated from Ireland, and was a member of the Watauga Association, and who, with members of his family, was massacred by the Indians, Crockett grew up a child in the forest. At the age of twelve he was hired out by his father to go four hundred miles on foot to assist in driving cattle. A short time afterward he ran away from home and landed in Baltimore; in order to get back, he struck out to walk,-as unafraid, and as much at home in the wilderness as the wild beasts that inhabited it. Thus he grew up. At fifteen he could neither read nor write. Being unsuccessful in a love affair, which he attributed to his want of learning, he went to school for six months-all the schooling he ever had. At this early age he was skillful in the use of the rifle, and was laying the foundation of his later renown as a bear hunter.

So begins this mini-biography of the legendary frontiersman, Congressman, folksy philosopher and Alamo hero and martyr

Mentions: The Crocketts trace their lineage to Antoine de Drocketagni (1643), a French Huguenot, second in command of the King's Guard, and banished from France during the reign of Louis XIV; his wife was Louise de Saix. Rebecca Hawkins,, David Crockett's mother, was of the landed gentry of France John Jacob Astor Mrs. Wylie Flowers the old King's Highway With Travis and Bowie and the one hundred and fifty, David Crockett fought his last fight

When I Had My Picture Taken

While the picture is not a bad one, yet it is not what my wife and mother-in-law would like for it to be. Of course a onelegged man with a cataract in his left eye can tell at a glance that it is the photograph of a highly intelligent man, yet the camera failed to reveal to the naked eye some of my strongest points and brought out in the most uncalled for and unsolicited manner some of my weakest parts. What would be the conclusion of a stranger beholding my picture for the first time? He would concluded at a glance that I was a bald-headed man with a nose slight out of plumb and who had passed through some forty-odd summers. In all probability he would not observe the firm-set determined jaw, the closely-compressed lips, the proud and haughty stare, the marble brow heaving bosom, the Grecian, nose, the eagle eye, the classic chin, the long, sweeping eye-lashes, and last, but not least, a pair of well-matched gothic ears.