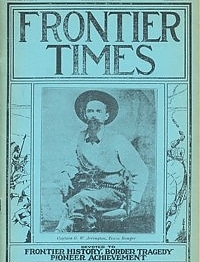 Captain G. W. Arrington of Hemphill County leads a company of Rangers from Fort Griffin to the headwaters of the Brazos River. Detailed account of this expedition and battles with hostile Apache Indians.

Heroism of A Negro Slave

Ben Guthrie reminisces about an Indian raid and the bravery of an old Negro named Albert Chandler. Takes place on the Williams ranch in Brown County.

History of Fort Meade from its beginning at Camp Sturgis in 1876. Fort Meade came very much into the limelight when its Fourth Cavalry furnished the Presidential Guard while the President was vacationing in the Black Hills.

Soldiers whose good fortune it is to be assigned to Fort Meade, South Dakota, home of the Fourth Cavalry, and once one of the largest mounted stations in the country, have the privilege of serving their enlistments in a post at once pleasant as to environment and replete with historic lore - a post with a past, in a word, but a past in which glory and records of momentous events in our early frontier history play the predominating role.

The fort, today, established in its present location in 1877, had its beginning a year earlier at another location eight miles distant, called Camp Sturgis, hard by the foot of Bear Butte, one of the historic landmarks of the South Dakota Black Hills. In those days the frontier was everything that the name suggests, and a bit more too.

Camp Sturgis was founded in 1876, the year following Custer's famous fight, and was named in honor of Lieutenant Sturgis, who fell in that gallant fight…

Memories of Texans on San Jacinto Day and other historical holidays.

Assistant surgeon Bernard John Dowling Irwin is remembered for great bravery and endurance when he rode boldly through dangerous Indian country to rescue some wounded civilians.

Siringo, who was born in Texas and who gained fame as a hunter of outlaws, rode in the saddle on drives over the old Chisholm trail of Kansas. Later he punched Texas longhorns throughout the Panhandle country, where many a wild and wooly Western story had its inception.

But it was a train ride 42 years ago that turned the tide in Siringo's life. A cattle train took the plainsman to Chicago, where his experience as a cowboy gained him a place with the Pinkerton Detective Agency.

From Chicago, the Pinkertons sent him to Denver. Some of his better known exploits against the lawless characters of the Western plains followed.

[SELLER’S NOTE: Actually, Mr. Hunter should have titled this series of stories "A detailed and extensive account of the Early Days in Mason County." This great series (5 installments) includes some of the most painstaking historical and genealogical research to be found anywhere, and it all pertains to the life of Mason County and its early history, settlements, frontiersmen, family movements, development, Indian raids, political, social, economic development, etc, etc. As well as including the most minute detail, this series also includes many, many old B&W photo images of NUMEROUS early settlers of Mason County. Truly Mr. Hunter has done an inestimable service to those interested in Mason County, Texas history and genealogy.

The life and adventures of the Goodnight family as they struggle to survive and deal with hostile Indians.