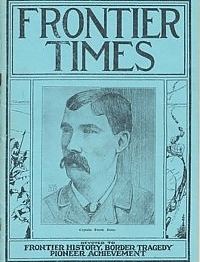 The Killing Of Captain Frank Jones

Captain Frank Jones was a gallant Texas Ranger. He is remembered kindly by all of the Old Guard who are yet living, as one of the most efficient, brave, untiring Rangers in the service of the State. He lost his life in the discharge of duty, while trying to effect the capture of a band of outlaws, near El Paso, Texas, June 30, 18­93. The story of his death will be given further on in this article, as related by the late lamented Col­onel George Wythe Baylor, his father ­in law. Captain Frank Jones was born in Austin, Texas, in 1856. He was the son of Judge Wm. East­man Jones of Geor­gia, and his wife, Elizabeth Rector Jones of Tennessee.

Hills and valleys covered with tall grass; uncleared forests; great herds of buffalo, deer and wild turkeys; the nights disturbed by the yelping coyotes, and the lonesome howls of the lobo; settlers terrified every light of the moon by the sneaking raids of Comanches or Apaches,-such was Texas when first seen by Lafe McDonald of Gillespie County. This indomitable old hero was born in Johnson County, Illinois, on the 11th day of March, 1844, one year before Texas was admitted to the Union. His father was old Thomas Mc­Donald, whose wife was named Rachel, the same as the wife of Andrew Jackson-a very common name in those days. To them was born a large prodigy of children, the eldest being a girl whom they named Mary. She afterwards married George Fannin, and was familiarly known in later life as "Aunt Mary Fannin.; The next was Monroe, who died at his home on Devil's river near Noxville a few years ago. Then was Melvina, who married John Fannin, and then Mariah, who married Dick Hall, still living in Colorado City; then Angeline, who married John Banta, the parents of the writer's wife; then Lafe, etc, etc. This great pioneer’s life is offered in this story.

[SELLER’S NOTE: Actually, Mr. Hunter should have titled this series of stories “A detailed and extensive account of the Early Days in Mason County.” This great series (5 installments) includes some of the most painstaking historical research to be found anywhere, and it all pertains to the life of Mason County and its early history, settlements, frontiersmen, family movements, development, Indian raids, political, social, economic development, etc, etc. As well as including the most minute detail, this series also includes many, many old B&W photo images of NUMEROUS early settlers of Mason County. Truly Mr. Hunter has done an inestimable service to those interested in Mason County, Texas history and genealogy.

In the year 1849, under the ad­ministration of President Taylor, the government, with the view of encouraging the settling of the southwestern border in Texas, es­tablished a line of forts from the Red River to the mouth of the Rio Grande at a distance of forty or fifty miles apart.

An expedition in the charge of Captain Ma­son was sent out to choose locations for these posts. He recognized the natural advantages of a hill just south of the pres­ent town of Mason and marked it for a fort, which was called Fort Mason in his honor. The land upon which the fort was built was purchased in a hundred and six­ty acre tract from Mr. Hick, the father-in-law of another Mason resident, Mr. Jacob Schuessler.

The next year, 1850, Major Merril and four companies of soldiers began working on the much desired fort, but it was not completed for two long years. From the time of the arrival of the contingent under Major Merril until the outbreak of the Civil War, the fort was constantly gar­risoned by from two to eight companies of soldiers, depending. upon the ever-changing hostility of the savage hordes about it. Be­fore the soldiers came into this frontier country, no known white man had visited it. The Kiowa, Apache, and Comanche In­dians, and the buffalo, antelope, and deer had been the only inhabitants. The tribes resented the_ intrusion of the white-men and very soon they took the war-path against them. Their natural ferocity, strengthened by an intense hatred of their new enemy, kept all but the most daring away; even the most zealous and fearless frontiersmen kept at a distance. The nearest settlement to Fort Mason was Fredericksburg, where the Fisher & Mil­ler Emigration Company founded a colony of German emigrants, who had left their crowded Fatherland for a more prosperous life in America. Many of these emigrants were revolutionists who were forced to leave Germany because of their apparently radical views. Their descendants fought "Kaiserism and Kulture" during the World War and were among the best soldiers our country posessed in the Civil War. One soldier, of whom all Texans are proud. Louis Jordan, was the first Texas officer to fall in action in France and was among the first eighty picked men to be sent from Texas to the front lines.

To each settlement in this southwestern borderland the State of Texas gave a grant of six hundred and forty acres, and well did they deserve it, for the dangers, privations- and hardships these poor set­tlers endured were almost inconceivable. Some died of starvation, others were slaughtered by the Indians, and a great many died of disease produced by lack of nourishment and other terrible privations. To some fourteen or fifteen families an as­signment of land was made in the southern portion of Mason county, then under the jurisdiction of Gillespie county, but these people were compelled to wait until the soldiers had arrived before they could take possession. In 1855 and 1856 the Kothmanns, Leifesters, Jordans, Lemburgs, Simons, Kneeses, Hasses, Beherns, Elle­brachts, and others, whose descendants are filling Mason County today, comprised the small band of settlers in that untamed land. They faced their uncertain future bravely and tried to live as normally as possible, erecting homes and producing what foods they could in their new en­vironment. Henry Hoerster, now a cattle­man and one of the most prominent citi­zens of Mason, Texas, claims to be the first white child born in Mason County. The hardships and discouragements which awaited them were many for, in spite of the vigilance of the soldiers, the Indians would destroy the fruits of many day's toil in a twinkling and sweep away to safe­ty with bands of stolen horses and cattle. Above all, their lives were in constant danger. Nevertheless, they were determin­ed to found permanent homes for them­selves and their posterity. They trusted in God, being devout Christian men and women. As soon as they became settled they created an altar to their God. It consisted not in an ordinary church as we have today-building materials were too scarce for a real church to be had; so each family made a little altar in their log cabin and each cabin served as a church. The meetings were held in a cycle, and the en­tire populace attended them. At the conclusion of each meeting the good folk re­mained and ate dinner with the host…

And so begins this excellent historical account of the rich history of Mason county.

(The preceding introductory excerpt is from the first installment, found in the November, 1928 volume, which is available from us)

General B. J. D. Irwin (who was an eye-witness to the events)

Account seeks to shed new light on and also to justify Captain George N. Bascom and the occurrences that led to the summary execution of six Chiricahua Apache warriors at Apache Pass, Arizona, in February, 1861. Of all the Apaches, the Chiricahua were by far the most vicious, and their wanton attacks aimed at settlers and travelers, coupled with their cowardice (they only attacked when they greatly outnumbered their victims), led to this notable battle. Very detailed and excellent eye-witness account.

Frontier Times is in receipt of the fol­lowing letter from Colonel J. H. Faubion, that grand old man of Williamson county, Texas, who knows more about the history of the Texas frontier than probably any other living man. Writing from Leander, Texas, under date of November 25, Colonel Faubion says:

"I have just read in Frontier Times your `Brief History of Early Days in Mason County,' and I assure you that I found it very interesting, principally from the fact that I spent some time in Mason county in the summer of 1867, and had the pleasure of getting acquainted with many of the splendid citizens, whom I found to be very hospitable. and kind to a stranger. I went there along with my uncle, Dr. John McSween, who had a ranch six miles south of Mason, near the Llano river, but was living at that time in San Antonio. Among those I met and who were so kind to me were the Keller family, Adam, August and Adolph; the Hoersters, Major Ranck, Mr. Gooch, the Gamels, Crosbys, Morrises, Lindsays, Lemburgs, and many others. I also met Mr. Kit Woods, who lived in the town of Mason, and Mr. Weatherby, who lived on Honey Creek near…

A Reunion Of Pioneer Women

Account recites the story of Mrs. Rabb whose frontier experiences were thrilling. She was born near Skillet Knob on Legion Creek on the Llano County line which was frontier at that time. Their nearest neigh­bor lived eighteen miles away. Mr. James Wilson, her father, was a ranchman, and was away from home a great deal of the time. Indian raids were frequent, and the settlers were in constant terror of them. Mrs. Rabb had seen Indians on the warpath, had been shot at, and lived to a ripe old age and here, tells her story.

CAPTAIN ARRINGTON WAS A BRAVE MAN

Captain Gillett (who was himself a great and courageous man), recounts in this story many of the notable acts of courage performed by Capt. G. W. Arrington while in the line of duty. Arrington was a Georgian and a Confed­erate soldier. On returning home from the war, he was active as a Ku Klux and took such a prominent part in that order that he was forced by the Federal Government to flee his native state and take up his resi­dence in Texas and for awhile taught school in Coleman county. In the summer of 1876 he joined Company "E", Texas Rangers. In the fall of that year he was transferred to Company "A," Commanded by Capt. Neal Coldwell and was appointed first sergeant. Later, he was promoted to captain of Company "C" and spent all the rest of his days in the Panhandle of Texas.

THE FIGHT AT WILLIAMS RANCH

Account of the Indian fight that occurred at Williams Ranch in about 1871 or 1872, where the author’s father, James S. Gillett, owned a small stock of cattle in Brown (now Mills) county, where a band of In­dians charged this settlement in broad day­light and a fierce battle began. The Wil­liams and their neighbors had just bought a case of ten Winchester carbines, the old brass sided guns that all old frontiersmen are familiar with. These 44 Winchesters probably saved this little frontier village from being wiped out… This is the story.