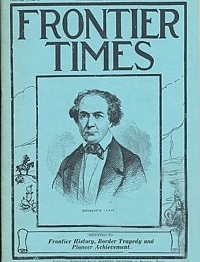 Brief life history of the man who when Gen. Houston's first term was out, was by a very handsome majority, elected President of Texas.

Mentions: He was born to an Hugenot family in Louisville, Georgia, August 16th, 1798.* he was private secretary to Governor Troupe * he was editor of a States'-rights paper * Groce's * greatly distinguished himself by rescuing Col. Lane * Lamar heroically dashed over one Mexican, killed another, and disarmed a third * Lamar was invited into Burnet's cabinet, as Secretary of War * General Rusk * the taking of Monterey * Post Commander at Laredo * Miss Maffit, daughter of the celebrated Rev. John Newland Maffit, and sister of Commodore Maffit * elected to the Legislature. In 1851 * Richmond, Fort Bend county *

Account of Frank Hamer, Ranger captain, whom Governor Dan Moody picked to "tame"' Borger, then an upstart oil town in the Panhandle where 26 killings occurred in three years. Hamer though quiet, unassuming in character, wrought terror in the hearts of the lawless by virtue of his reputation as a dead-shot.

Account of Ranger, Wash Mccollum, of Comanche, TX who enlisted in the service in May 1874 when a company of one hundred and fifty men was made up at Stephenville and Comanche under Lt. J. W. Milligan. He recalls those dangerous days of Ranger service in the area around Comanche in this story.

A VETERAN OF INDIAN WARS

Old Times On Range When Texas Was Young

Account of Newt Ferguson, old time Coleman county cattle rancher who recalls vivid events on the trail, in the saddle and on the ranch.

The Last Raid, Of The Dalton Gang

Detailed account of the raid that ended in the death of all but one of the 5 members of the Dalton gang (Includes old B&W photo image of the 4 dead ones) that occurred at Coffeyville, Kansas, on October .5, 1892

PRISONERS EXECUTED TO SAVE THEM FROM COLD

Account of Houston's first court house and how a merciful judge ordered two prisoners hung to save them from the cold.

Further Mentions: The first court house and jail in Houston were built in 1837 * Harrisburg * a man named Britton * one Bell * a man named Adams * Judge Robinson *

Story of the disappearance of the Loner herd of cattle in October of 1872 when that entire herd of cattle consisting of 5,000 head of longhorns, belonging to Jacob Loner, mysteriously disappeared.

Texas is believed to be the cradle of the manufactured ice industry of the United States. In 1860 David. Boyle, who lived near Jefferson, Texas, invented and built a small, three-ton, vertical, two-cylinder compressor…

Mentions: One of the old Boyle machines is still located in the Pittsburg plant of the Southwestern Gas and Electric Company * Southwestern Ice Manufacturers Association

The Killing Of Mr. And Mrs. Light

Very sad account of the massacre of the Light family on Grindstone Creek in Parker county, 1869. Bill Light was an early settler of Parker county. His wife's maiden name was Mary Ann Porter.

Further Mentions: The little boy, William Lee Light * Emma, a girl about nine years old * The oldest girl, Sarah Ann * Mrs. Light and baby * Grandfather Porter's place, about a mile from where they were killed * a man by the name of Tomlinson * Maxwell, who lived on the Brazos river, about twelve miles south of Weatherford, just a few miles above the mouth of Patrick's Creek, at the upper end of the Big Valley * Collin county * a brother-in-law, Jim Newberry * Huss Newberry and Elbert Doss *

Account of Caldwell County rancer, E. A. (Berry) Roebuck. This fella definitely had a wild ride in the life of frontier Texas. This is his great story.

Further Mentions: His father, W. W. Roebuck * old Uncle Lige * Mrs. Randolph * Pinckney Henderson * Timothy Pillsbury and Dave Kaufman * the little village of Lockhart * In 1852, six years after he landed in Texas, he was married and with his young bride set up housekeeping on his own ranch in a log cabin near the town of LaGrange * Col. Jack Meyers' ranch * I went from Caldwell County over to Gillespie County with Coleman James and helped him put up 2,300 cattle at the Smith & Wimberly ranch * Tom Garner * the Great Bend of the Arkansas * Dan Shepard, Joe Roberts, Bill Ellis, who was afterward killed at Mobeetie * Ernest Callahan, Manuel Jones and the cook, Lewis Minuer * Smokey River * George Hill, who was assassinated at Cotulla in the '08s * Wash Murry, a noted cowman * J. J. Roberts of Del Rio * Smokey River range * Mack Stewart * Coming on down through the Territory two of Sam Bass' gang overtook us and said they would like to ride with our outfit a while * Black Bill Montgomery, a big cowman * Bart Kelso * Red River Station * George Morris *

On the 28th of January, 1843, Jacob Snively, who had held the staff rank of Colonel in the Texian army, applied to the government for authority to raise men and proceed to the upper boundaries of Texas, and capture a rich train belonging to Armijo and other Santa Fe Mexicans. This became known as the Snively expedition, one of a series of forays in which Texas and Mexico engaged during the early period of the republic. The main purpose of the expedition was to retaliate for indignities heaped upon the Texans resulting from the Texan Santa Fe expedition, the Mier expedition, and Gen. Adrián Woll's raid on San Antonio. On February 16 the War Department authorized the organization of a force not to exceed 300 men. The expedition was not to be regarded as a government undertaking, although the spoils of the campaign, to be taken only in honorable warfare, were to be divided equally between the government and the members of the expedition.

On the 3rd of September, 1844, Henri de Castro accomplished Frenchman, bearing a Spanish name inaugurated his colony as a town laid out on the west bank of the Medina River. It was a bold step, doing what both Spanish and Mexican power had failed to do - founding a permanent settlement of civilized, Christian men, between San Antonio and the Rio Grande. Given the climate of hostilities, the constant threat of marauding savages and its relative isolation, it was an achievement entitling the name of Henri de Castro to be enrolled among the prominent pioneers of, civilization in modern times.

Account of a long-standing East Texas feud between “moderators” and “Regulators” and the blood that mark this episode of Texas history. This event, otherwise known as the Regulator-Moderator War was a feud in Harrison and Shelby counties in the Redlands of East Texas from 1839 to 1844. The roots of the conflict lay in the frauds and land swindling that had taken place in the the lawless area between the American and Mexican borders. Hostilities rose to a tremendous pitch and a trail of blood was left to mark this notable period of Texas history. Here is that story.

Account of Mrs. W. B. Ellis of Menard, early pioneer adnm settler of Menard county. This is not only her experiences in early Menard, but also the many artifacts and relics that she has retained through the years.

Further Mentions: the office of the D. A. R. in Austin * Her father built the old stage stand between Menardville and McKavett, now located on a piece of property belonging to Mrs. Ellis' daughter, and son-in-law, Judge and Mrs. E. T. Neel of Menard * Her father made the lime out of which Fort Concho, Tom Green County, was built * Her father's name was Oscar Splittgarber * Ben Ficklin * The first building in Menard she says is that behind the Moser garage * Capt. D. W. Roberts, now of Austin * the mines near Menard. "Bowie," * W. L. Kingston * Ruidosa *

Sketch of General Robert B. Lee, taken from that very rare and interesting book, "Texas, the Coming Empire, or Two Thousand miles in Texas on Horseback," by H. F. McDaniel and N. A. Taylor, and published by A. S. Barnes &., New York, Chicago and New Orleans, in 1877.

Not a professional clown, but a man rich in true Texas character and witt is what Fogg Coffey is. So much has been said of him that he has been expanded into a myth, something without form and flesh. It required him many years and many trips to Ballinger, Paint Rock and other towns to build up his collection of interesting anecdotes of this typical free hearted, breezy westerner who loved fun, horses and his fellow man. Fogg was born in Parker County in 1863 but at the age of three months came with his father, Rich Coffey, to the Concho river at Leaday. He worked for the O. H. Triangle folks when Coggins and Parks of Brownwood owned it, and branded from 10,000 to 13,000 head of cattle a year. He used to rope wild mules and horses tying the rope round his body as the wild ones thundered down the hill. He tossed the loop, caught them and then hung on-he had to. He took no chances of failing-he risked his own life rather than fall. "Well I had to catch them," he says "we needed them The Indians stole the tame horses and we had to use the wild ones."

The Romance Of The Old Texas Cattle Trail

During the 20 years from 1868 to 1888, 50,000 Texas cowboys, equipped with 500,000 mounts, or horses, drove up the Texas cattle trails to the Northern and Northwestern markets 10,000,000 head of Texas cattle. The cattle industry took its rise in the Southern and Southwestern parts of the state and for a score of years it was the romance, as well as the bread ticket, of the Lone Star State in that period of our history when prostrate and distressed from the tragedies of the civil war the surviving soldiers of the lost cause and their growing sons sought to rehabilitate the state and reconstruct their shattered fortunes.

Further Mentions: The Chisholm Beef Trail was the first through trail from Texas to the Northern and Northwestern cattle markets. This trail proper began a few miles south of Austin, ran up through the capital city, then through Georgetown, Round Rock, Salado, Belton, Camanche Springs, Crawford, Valley Mills, Cliffton and Meridian; crossing the Brazos at Kimbleville, on up through, Cleburne, Fort Worth and Gainesville, and out across Red River into what was then the Indian Territory to the Kansas markets * Charlie Siringo * the McKenzie Trail * "The Log of a Cowboy," by Andy Adams * "Reed Anthony, Cowman," "`The outlet," "Cattle Brands' and "A Texas Matchmaker," all by the same author and all published by Houghton Mifflin Company, of Boston * Blackfoot agency * a cowboy, named Priest * Live Oak County * Lem Todhunter * Buffalo Gap * Doan's * Wilbarger * Coryell County * Block Bar ranch * Doan's Store. or Doan's Crossing * Barney McCann * Joel Collins and his outfit * Big Springs * Ogalalla * Sam Bass * Crawford 20 miles west of Waco * C. M. Seley * the Waco State Bank * Charles H. Coe * Mr. J. J. Schrade, San Antonio, Texas