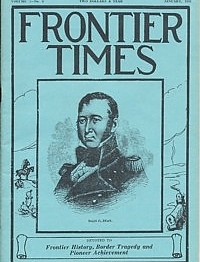 "A FORTUNE IN FENCE RAILS"

Due to the inherent strength and qualities of American walnut, these same fence rails proved to be of considerable value to the American nation 50 and 100 years after they had been cut and exposed to the elements.

Immediately prior to the Civil war in 1861, the subject of stocks for firearms was formally discussed at a convention of gunsmiths at Atlanta, Ga..."

Account of an event that occurred in Cherokee County about a woe-begone Indian, Indian Jim who after an intense struggle over a young squaw was banished for seven years from the remnant of his tribe which was dwelling somewhere on the Trinity River, and was condemned to pass that term in continually tramping to and fro along the stretch of two hundred miles between this section and the Indian Nation.

MOTHER AND SON REUNITED AFTER 27 YEARS

Dead to each other for twenty-seven years, Mrs. Maggie Berryman, of Lubbock, and her son T. E. Bush, of Abilene, were reunited through an advertisement Bush saw in a magazine. The boy left home in Hill County to go to the Spanish-American War and when he returned his mother was gone. Three years later he saw a story which told of the death of a woman by her name and gave tip efforts to locate her. This is the story.

Wage war to the death over a few bushels of salt? It seems absurd! Yet such wars have been. In fact, some of them waged in our own country, not so long ago. Into the history of Texas was written a bloody page which had, besides its tale of brutal murder and pillage, the further and much more incredible record of Texas Rangers surrendering -the only time in the annals of the famous Frontier Battalion when the white flag was raised. The cause was salt. . .and this is the story.

Includes old photo of Mrs. W. A. Thompson. Mrs. Thompson tells of smoke signals of war, couriers of disaster, galloping their horses to death, while over the rolling horizon came the pursuing Indians, yelping for a scalp. She was a Hays county pioneer. She is the daughter of Monroe Hardeman, one of the colorful figures that fought for the independence of Texas with Sam Houston in the battle of San Jacinto and Gonzales. Her grandfather, Thomas J. Hardeman, arrived in Texas in 1833 to become one of the hardy settlers.

During several Indians uprisings, Mrs. Thompson's father was a major of the Texas militia, engaging in several battles with the roaming redskins. Placedo, chief of the Tonkawas, once saved the life of Major Hardeman while savage warriors fought the militiamen. The "major also sat as a member of the tribunal that decided the fate of General Santa Anna after his capture.

One of the stories of Indian depredations told by Mrs. Thompson is about the saving of a woman's life because her captors' arrow was held off by a wooden stave in her home-made corset.

The Truth About Tom Horn

Life account of Tom Horn, "King of the Cowboys," valued Government scout and interpreter under Generals Crook and Miles in the various campaigns after Geronimo, the noted Apache chief, later famous cowboy on Arizona ranches and the deputy of three sheriffs of that State, and lastly cowboy and cattle detective in Wyoming. Lengthy and detailed account of the events of his life including his arrest, trial, imprisonment and subsequent efforts to clear his name.

This tragic family endured three brutal attacks against them by Indians and they are all described in terrifying, first-hand detail in this account. In the second account, young John Coalson himself (age 14 at the time) was shot and left for dead. The events occurred on Copperas Creek, twenty miles south of Fork McKavett, on Cedar Creek, a tributary of the Nueces in June, 1877, and the third one on the same location about a year later. This account is also excellent early history of the area.

"After thoroughly wrecking the camp the Indians came back to where I was. The first I knew of their coming was when I heard their horses' hoofs striking the gravel in the dry creek-bed close to me. When I heard them coming, I thought my time had come, sure enough. One Indian got off his horse, turned me over on my back, and opened my shirt. He then rode off, but he had his suspicions. As he rode away, he kept looking back. I was lying with my arms over my face, but was watching them as they left. They left one of my knees sticking up when they turned me over. I kept it that way as long as I could, but after they rode off, my leg fell from this position so that it lay on the ground. The Indian who kept looking back must have seen this, for he stopped his horse and …"

"…it was sister, May Etta Elizabeth. She had worn a red dress that day. I saw arrows sticking in her back. The Indians had taken her red dress off and had left her in the road in her white underwear. I saw she was dead, so I turned and ran for the house. I expected the devils to take after me any minute. I remembered what they had done to me a year before. It was three-quarters of a mile to the house, and I ran I was stepping on air I was awfully scared, and wasn't a bit tired when I got home. We found that the Indians had slipped through the cedar brake where a ridge from the north-west ran down to the road. They had left a spy on this ridge, and had way-laid my step-mother and the children down the road apiece. They had shot my step-mother in the right groin with one arrow, and had pinned her left arm to her side with another. Mother fell off the side-saddle. They shot at sister and missed, then threw her off. She took right up the road for home. She ran 300 yards. We found where they had followed her, and where the arrows they shot at her were sticking up in the ground. She would have gotten away except for the spy on the ridge. He ran off the point right behind her and killed her. May Etta Elizabeth was the twin to my brother killed exactly a year before in the attack on our goat camp. She was only 11 years of age…"

"A humorous incident occurred the next day after one of these attacks on us. The Indians were riding down the road, and saw ahead of them Doctor Wright's wife, and her son. Mrs. Wright weighed at least 250 pounds, and was riding a mule. She forced her son to leave her, saying that it was impossible for her to escape and that it was no use for both of them to be killed. Finally, he put spurs to his horse and lit out. Immediately the mule took right in after the horse, braying at every jump and wringing his tail around and around. The Indians were so tickled that they merely hollered and laughed, and made no attempt to catch Mrs. Wright and her son. The mule kept right up despite his load of 250 pounds."

This account details the story of the Centralia, Mo., Massacre, as told to Welter Williams by the late Frank James. One of the most terrible conflicts of the Civil War occurred near Centralia, Boone county, Mo., in the afternoon of Tuesday, September 27, 1864. Nearly 200 Federal soldiers, commanded by Major A. V. E. Johnson of the Thirty-ninth Missouri Infantry, riding out after guerillas, met there Captains Bill Anderson and George Todd, with 225 men. Scarcely a dozen of the Federal soldiers escaped with their lives, while of the guerrillas two only were killed and one mortally wounded. Every man in the federal line of battle perished, and only half a score of those left to hold the horses got away. This is the eye-witness account.

NOTE: THIS IS RICH, RARE AND EXCEEDINGLY DETAILED GENEALOGY AND HISTORY OF SOUTHERN LLANO COUNTY, NORTHERN BLANCO COUNTY AND SOME GILLESPIE COUNTY.

Detailed and lengthy account of early records of Llano county settlers from the old church book which was in the possession of the writer, who was a member of the Macedonia church. Beginning with the early founders of the church while still in Missouri (Pulaski County), the account goes on to show the early movements of the hardy settlers who came to southern Llano and northern Blanco county to make their homes their.