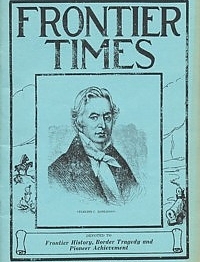 STERLING C. ROBERTSON was born in Nashville, Tenn., about 1785. He served as Major of Tennessee troops in the War of 1812 and 1814, and was honorably discharged. He received a liberal education and was reared in the occupation of planting. He engaged in agriculture in Giles county, Tennessee, but in a few years moved to Nashville. Enterprising and adventurous, and being possessed of large means, in the year 1823 he formed a company in Nashville to explore the wild province of Texas. He penetrated as far as Brazos and formed a permanent camp at the mouth of Little river. All the party returned to Tennessee, however, except Col. Robertson. He visited the settlements that had been made, and while there conceived the idea of planting a colony in Texas. Filled with enthusiasm over this plan he went to his home in Tennessee; there he purchased a contract that had been made by the Mexican government with Robert Leftwich for the settlement of 800 families. Col. Robertson was a delegate to the General Convention of 1836, was one of the signers of the Declaration of Independence, and of the Constitution of the Republic of Texas. He died in Robertson County, Texas, .March 4, 1842, in the fifty-seventh year of his age – this is his story.

THE FIRST ROSTER of officers of that regiment which is the Fifth Cavalry reads like the list of players in a drama for which an entirely stellar cast has been employed: Albert Sidney Johnston, Colonel, commanding; Robert E. Lee, Lieutenant Colonel; George H. Thomas, Major; Earl Van Dorn, Captain; John B. Hood, 2nd Lieutenant.

All these, and then there were still other future generals whose later fame was likewise great. Some of them were Kirby Smith, William J. Hardee, Oleo, Stoneman, James Oakes, H. W. Johnson, Charles W. Field, William H. Emory, and N. George ("Shanks") Evans. A few years later two other young second lieutenants, destined for future distinction, joined the command -George Armstrong Custer and Fitzhugh Lee. The origins and brilliant history of the Fifth Cavalry is the theme of this excellent article.

XAVIER WANZ, (pronounced Sevier Vance) was born in Strassburg, Alsace, in 1844, and came to Texas with his parents as part of Castro's Colony in 1845. They landed at Port Lavaca and then proceeded out to Castroville. Later his parents left Castroville, went fifteen miles further west and settled at a place called Vanderburg, four miles northwest from the present village and settlement of New Fountain. Mr. Wance was a formidable Indian fighter, settler and ranchman of Medina county for 77 years. This story is excellent history of Hondo, Verde Creek and Medina County, TX.

SELLER’S NOTE: THIS IS RICH, RARE AND EXCEEDINGLY DETAILED GENEALOGY AND HISTORY OF SOUTHERN LLANO COUNTY, NORTHERN BLANCO COUNTY AND SOME GILLESPIE COUNTY.

Detailed and lengthy account of early records of Llano county settlers from the old church book which was in the possession of the writer, who was a member of the Macedonia church. Beginning with the early founders of the church while still in Missouri (Pulaski County), the account goes on to show the early movements of the hardy settlers who came to southern Llano and northern Blanco county to make their homes their. IF YOU ARE LOOKING FOR ESPECIALLY DETAILED GENEALOGY OF THE AREA, THIS ARTICLE IS A MUST – IT IS ONE OF THOSE GEMS FOR WHICH THESE HUNTER’S FRONTIER TIMES ARE FAMOUS!

Story of John Alexander Greer who was born, July 18, 1802, at Shelbyville, Bedford County, Tennessee, the son of Thomas and C. L. Greer. Little is recorded of his early life but the fact that Greer County, Texas, now in Oklahoma, was named in his honor is testimony to the esteem that he was held in by those who knew him – this is his story.

Account of the South's foremost woman circus owner, and to her, more than to any other woman of her time, it was given to capture the hearts of Southern children. To Mollie A. Bailey the circus business was a lifetime profession. She had been in the circus business for 66 years. Mollie Bailey started in the show business when she was but 16 years of age. This is her story.

Further Mentions: Charles Lilienthal * Lilienthal Brothers * Seymour, county seat of Baylor County * Sumpter County, Alabama * At 14 years of age Mollie was chosen in a statewide contest as one of the most beautiful girls in Alabama. * James, A. Bailey * In the Civil. War Bailey entered the Confederate service and Mollie became a nurse. * Captain R. G. Carter * about "Crawford's Ranch," half way from Fort Richardson to Weatherford *

Account of Mrs. Amanda Bryant Fetterly who was born a native Texan on March 2, 1836 170 days before the Declaration of Independence was signed. Mrs. Fetterly enjoys another coveted distinction. Her father led a company in the victorious army that made binding the declarations of the statesmen at Washington-on-the-Brazos. Benjamin Franklin Bryant was born in Wilkes county, Georgia, in 1802, but later moved to South Carolina where he was married to Roxana Price. On Nov. 10, 1834, with their children they crossed the Sabine River at Gaines' Ferry and entered Texas, continuing their journey in wagons until Polygoch Creek was reached, two miles from the present town of Milam, Sabine county. Here they acquired land and here Sept. 12, 1835, Amanda Bryant first saw the light of day. This is her story.

Account of J. F. Propst who came to Texas from Illinois as a young man. He had no money and so came with a gang of hoboes, and ended working all his life on the Texas Railroads. He was employed by the old Texas & Pacific Railroad for 32 years. THERE IS SOME GREAT EARLY RAILROAD HISTORY HERE AS WELL AS A VIEW OF EARLY DENISON, AND DALLAS TX REGION.

The Passing Of The Medicine Show

"There is another institution that has brought much joy to mankind that is destined to pass away within the next few years if the protesting arms of the game law or the Salvation Army are not thrown around it. I refer to the great American institution-that medicine show-that has cured more diseases on the spot and pulled more teeth in public than all the doctors and dentists for the past two hundred years…"

A REPETITION IN HISTORY

The Santa Fe Expedition, of 1841, set out from Austin, and pursued a northwestern course with a view to reaching New Mexico in order to gain trade advantages for Texas. The expedition encountered Indian trouble, insufficient provisions and scarcity of water. The account is especially interesting in its description of the regoins around Georgetown, TX.

Account of Montague County resident, Reline Allred Sr., who carried the first mail route out of Bowie, for more than twenty-six years of service on the same route. During his long period of service, Mr. Alfred has traveled more than ten times the distance around the earth, delivering mail. For more than eighteen years he made the twenty-fourmile route, on fair days and stormy ones, in an open cart drawn by a faithful mare Ginger. This is his story.