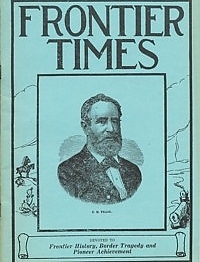 ELISHA M. PEASE, was born in Connecticut in 1812, and came to Texas in 1835. He was a lawyer by profession, but later his political career led him into the House of Representatives of the First and Second Legislatures, and Chairman of the Judiciary Committee, and two terms as governor of Texas. This is his story.

Mr. Cardwell describes first-hand account of his first experience driving cattle across the Texas frontier and the many notable experiences on that particular journey.

My first night out of San Felipe I was broiling my kid ribs and the coyotes began to howl that lonesome wail that is so often spoken of by the cowboys. One came so close to my camp that I could see him by the light of my campfire and I shot him. The echo of that shot had scarcely died away till seemingly a thousand coyotes were howling in every direction. Before daylight the next morning I went out to bring in my horses, and not a horse was to be found. Two hundred miles from home, with a wagon and no team, and no money! I just knew they had been stolen…

When The Pony Express Thrilled All America

The setting out from St. Joseph to San Francisco was accompanied by gestures more befitting the inauguration of what twentieth century Americans regard as the most picturesque mail service in history. On the evening of April 3 the pony and its rider were at the postoffice at 7:30 o'clock. A crowd had gathered to see him off, and we have it on high authority that speeches were made. Then the mayor brought out the mail bag, which contained dispatches for San Francisco newspapers, letters to the number of forty-nine and telegrams-five. The telegraph had not yet spanned the continent and until it did the Pony Express was going to be useful, carrying mail and California's golden dust at $5 a half ounce.

With a wave of his hat the messenger was off. He crossed the river on the waiting ferry and for twenty miles or so his horse thudded along the trail. Then there was a halt at which another horse awaited the rider; and finally one at which there was not only a horse but a rider. Night after night, day after day, over the plains and up the mountains and down again, the fast mail went on its westward journey. At Genoa it was not transferred to the coach. When it entered the California rider became aware that he was expected and that he was a hero. Every group of miners he passed gave him a cheer and every village a whoop. At Placerville guns were fired and speeches made. But the rider did not stop to hear them. At Sacramento, we are told by Zoeth Skiner Eldredge in his History of California, the legislature adjourned in honor of his arrival.

Old Military Posts In The Southwest

Brief accounts of abandoned old military forts. Some of the forts described are:

One of the most heroic incidents ever to happen along the Texas-Mexico border between armed forces occurred in Autumn of 1875. Captain L. McNelly along with with 30 rangers led that raid to apprehend a herd of 250 cattle and the thieves who were attempting to drive them across the Rio Grande. 27 Men were killed in the battle that ensued. This is the story.

Smith offers clarification and details regarding the article by Frank H. Bushick, "Maximilian's Ill-Fated Adventure," found in the May, 1930, issue of Frontier Times.

WHERE DID IT TAKE PLACE

E. E. Townsend, of Alpine, Sheriff of Brewster County for many years, has been trying to locate the place of massacre and probable burial of the twelve or fourteen Confederate soldiers of Company "D" of the Second Texas Cavalry, who under and with Lt. Reuben E. Mays were massacred in or near the Davis Mountains on the 11th or 12th of August, 1861. Those killed were Lt. R. E. Mays, Thos. Carrot of Hallettsville, John H. Brown, Samuel R. Desper, Frederick Perkins, Samuel , Shelby, John S. Walker of Lavaca County, belonging to Capt. Walker's company, and John Turner, guide of the post, John Deprose, R. H. Spence, Joseph Lambert, Jack Woodland and two Mexican citizens only a Mexican guide, known variously as Juan Hernandez and Cleto Heridia, escaped to bring news of the massacre…

WHO KNOWS THESE MEN?

Information is wanted as to the whereabouts of W. K. Rogers and Silas Rogers. One of these men at one time lived at Junction, Texas, and the other in Hunt county. Please address Miss Cora Rogers, Cameron, Texas.

This is the Second of a fifteen-part installment series of this quintessential Texan hero, frontiersman, Indian fighter, soldier, patriot and Mier captive. Duval does a masterful job capturing the character and uniqueness of the man and advantageously borrows heavily from Wallace’s own personal diaries, quoting from them at length. Wallace, from the old Scottish hero-heritage of the Wallace and Bruce clan, carried his noble blood to many escapades of which the history of the great state of Texas will forever be grateful and stands proud to call him one of her own sons. We can supply you with the rest of this great series – just email us for details.

Major A. B. Ostrander

Sad account of event involving Col. Cook of the United States Army, in 1878 who was at that time stationed at Fort Sill, and set out with a small body of cavalry to find the marauding "Black Horse" a petty chief among the Comanches and bring him back to the Fort Sill Reservation. Poor judgment resulted in actually arming this renegade band with the finest rifles and ammunition available and then being attacked as a result. Corporal Douglas’ battle was the result of this event.

The origin and history of Bent's Fort and of the Adobe Walls, in the valley of the South Canadian River, in Hutchinson County, Texas, is the theme of this story.

An old Dallas paper, printed on March 21, 1880, carries the following item: "The Central Railway offers excursion tickets to Galveston at the Union depot today and tomorrow at the reduced rates of $18.90, in, order to give the people an opportunity to attend General Grant's reception in that city…"

An old trail driver, an open range cowboy, a Confederate Veteran and a Texan since his birth in Guadalupe County in 1843, was Dudley Tom. Here was the consummate cowboy, and character, as well as one of the founders of the notable the 7.H.4. Cattle Company. This is his story.

Brief account of Mrs. Sarah Russell, of Menard, Texas. Mrs. Russell was born in Hall county, Georgia, drove one of the two ox wagons that conveyed her and her husband and five children to Texas. The trip was made from Georgia to Texas in 1870. They left in October and arrived at Menardville in February, 1871, being about five months on a trip that would today require fewer than that many days. The family settled on, Celery Creek on land that is now in the D. F. Volkman ranch. According to Mrs. Russell's statement, it was no infrequent sight to see Indians ride through their yard on a moonlight night.

One of those who paid the high price of our present peace and civilization lives in Pearsall, Texas, in the person of Mrs. Sallie Patterson, who was born on November 23, 1838, two years after the Alamo fell. Mrs. Patterson, a native of Mississippi came to Texas in 1851 and remembers the state-at a time when "most people lived in tents or in picket houses." Her Indian experiences rival those of any frontier survivor. This is her story.

FOUGHT FOR TEXAS UNDER THREE FLAGS

Juan Zamaneigo, who died a few weeks ago in Uvalde county, enjoyed the distinction of having fought under three flags. So far as is known he was the oldest person in the State. Mr. Zamaneigo was a native Texan, being born at what is now Calaveras, Texas, in February, 1810, when Texas was still a province of Spain, and while James Madison, fourth president of the United States, was guiding the destinies of this nation. At the time this pioneer first saw the light of day the only points of any note in what is now the great State of Texas were San Antonio, Goliad and Nacogdoches. Probably not more than 4,000 white people were residents of the territory which' constitute the Lone Star State.

When a child, he was orphaned and was sent to live with his grandparents in Mexico. There he saw service in the war of Mexico against France. After that war he returned to Texas and was a Texas soldier in the war against Mexico for Texas independence. lie was later a soldier in the United States army in tine war with Mexico…