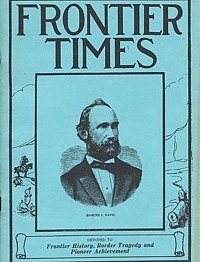 The End Of Carpet-Bag Rule In Texas

Edmund J. Davis was a native of Florida, and came to Texas in 1846. During Carpet-bagger rule of Texas, he was elected Governor January 18, 1870, and held the office until January 13, 1874. On January 19, 1874, he vacated the office and this made way for the installment of Governor Coke and the end of carpet-bag rule in Texas. This is the historical account. Mentions: Richard B. Hubbard * Richard Coke * General Reynolds

THE SEVEN CITIES OF THE CILOBA

The Seven Cities of the Ciloba, if their legend be true, lie deeply buried beneath a flow of lava and volcanic ash some miles to the westward of Albuquerque, New Mexico, and were there builded on a once beautiful plateau, or high plain, overlooking the waters of the Rio Grande, far to the eastward, and facing the rising sun. Their destruction, with that of many of their people, occurred long years before the coming of Coronado.

Account of Dr. Henry F. Hoyt, frontier adventurer and was the first physician to settle in the Texas Panhandle.

Account of Old Presidio Road, a trail that was laid out by usage and necessity from a point on the Rio Grande about 30 miles below Eagle Pass, to San Antonio and on Northeast through the Nacogdoches and St. Augustine country to Louisiana. This is the account of that historical highway.

Old Military Posts Of The Southwest

THIS IS THE SECOND part of Old Military Posts of the Southwest, covering New Mexico, Colorado, Arizona and California, the first part (Texas) having appeared in the June issue of Frontier Times. Some Old Posts of New Mexico mentioned:

The Adventures Of Big Foot Wallace

This is the Fourth of a fifteen-part installment series of this quintessential Texan hero, frontiersman, Indian fighter, soldier, patriot and Mier captive. Duval does a masterful job capturing the character and uniqueness of the man and advantageously borrows heavily from Wallace’s own personal diaries, quoting from them at length. Wallace, from the old Scottish hero-heritage of the Wallace and Bruce clan, carried his noble blood to many escapades of which the history of the great state of Texas will forever be grateful and stands proud to call him one of her own sons. We can supply you with the rest of this great series – just email us for details.

The Ku Kluz Klan was a great law and order league of mounted night cavalrymen called into action by the intolerable conditions of a reign of terror under negro rule in the South. It was the answer to their foes of an indomitable race of men, conquered, betrayed, disarmed and driven to desperation. It was the old answer of organized manhood to organized crime masquerading under the forms of government…

Its rise was due to the mind of no leader. It was an accident. It was a case of spontaneous combustion…A group of college boys at Pulaski, Tenn., organized it first as a local college fraternity. They found a name in … and lo, the awe-inspiring "Ku Klux Klan!"

The terror of these silent ghosts, riding in the night, reduced the negro race to an immediate and profound peace: The idea spread to an adjoining county and rapidly over the State of Tennessee, which was the first to pass beneath the yoke of negro supremacy.

In 1867 a secret convention of peaceloving, law-abiding, God-fearing, patriotic Southerners met in Nashville and organized this society into "The Invisible' Empire."

Within a few months this empire had overspread a territory larger than modern Europe, and brought order out of chaos…

…Thieves looted the treasury of every State and county and taxes mounted until as many as 2900 homesteads of white men, many of whom could not vote, were sold for taxes in a single county…

The lengthy and detailed article goes on to recount the developments and activities of the group through the post Civil-war days in particular.

Account of James H. East. Mentions: * East was born in St. Louis Aug. 30, 1853. Seventeen years later, he was a Texas cowboy, learning the rough life of the cattle range and schooling himself in the use of the revolver, a trade of those early days so well learned that when Garrett came to organize his forces to fight the "Kid," he brought East from Texas and made him one of the posse. * Gen. Lew Wallace * served for four years as sheriff of Oldham County * Miss Hattie Boulding * the Lee-Scott Cattle Company *

HOW LLANO CAME INTO ITS OWN

This article is written by a great grandniece of the Oatman family, Mrs. A. C. Bowman, of Llano. The article is of interest to many people of this section. It describes how "Llano County, which was formed out of Gillespie County and the original municipality of Bexar, derived its name from the river which divides the town, and which begins in the great plains now known as Schleicher and Sutton Counties," Mrs. A. C. Bowman of that city said. "The Spaniards called the river `Llano,' or the `plains.' Thus the county's name.

"Although the county proper was organized in 1856, Llano had its real beginning in the early 40's, when members of the ,German colonies that first settled in and around Fredericksburg moved on the wide-open Llano country, where there was plenty of wild game, fish, cheap land and numerous springs and creeks.

"There is a tradition that in the early days the first inhabitants of the county were highwaymen, banded together in what was called the "Tree Society," so named for a penalty which called for hanging on the limb of a tree any member who failed in his obligation to the society. Be that as it may, the first substantial settlers, according to records, were Germans…

Further Mentions: settlers on the Llano River near Castell * Colorado River near Bluffton * Valley Springs * Pack Saddle, Mountain * Clement Oatman, great-uncle of Wilburn Oatman, attorney of Llano * In 1853 the population of ' Llano County was about 1,000

Texas Keeps Faith With Her Forebears

Details the efforts of Lou Kemp, a keen student of Texas history who began to investigate and found to his surprise that many famous Texans were lying in unmarked graves in abandoned family cemeteries, scattered all through the southern portion of the State. His work is documented in this article.

Our Greatest Heritage From First Americans

This story describes the single most valuable commodity the white settlers in the west were ever to gain from the Indian culture. The story is convincing and enlightening.

Fourth Cavalry Has Lived Up To Its Motto

THE 4TH CAVALRY was organized in 1855 as the, 1st Cavalry, its designation as the 4th being made six years later. In August, 1855, its personnel was assembled at Jefferson Barracks, Missouri, from active recruiting taken throughout various parts of the country. This is it’s history.

A Cowboy Of The Guadalupes

Account of the life of George Jayroe, who opened cattle range around the Davis and Guadalupe Mountains.

"By this time George, too, had a sinister feeling and some instinct prompted him to head back toward camp. He had not ridden far when he was aware of a mighty calmness that had settled all over the land. It was the calmness and stillness of death. As far as he could see he saw • the cattle gathered together in silent bunches, their heads in the air and their noses pointed toward the north. He looked out to the north and east and saw a great …

MRS. GOTTLIEB BURRER, (Katherina Zammert), came to Fredericksburg with the first settlers in May 1846. When she first saw the spot that is now Fredericksburg, the country was only wilderness, covered with rank weed and grass, waist high to a man.

The freighters of the ox carts, having fulfilled their contract and brought the colonists to Fredericksburg, dumped, the colonists and their possessions upon the ground, and left them.

The Zammert family, with the others pitched camp under the open sky. One morning a rattle snake crawled across the pallet upon which Katherina Zammert had been sleeping. Katherina, then three years old, was ready to grasp the snake, when her father killed it with a stone.

Her father, Daniel Zammert, having built a log house that was fairly rainproof, went to San Antonio to work until he had enough money to buy a cow. But he had been in San Antonio only a month before he fell victim to the cholera. A few weeks later the eldest sister also died of the cholera.

The Zammert family lived through the starvation days in the colony, when no freight wagons came with provisions for the colonists. They suffered from want of food, but Mrs. Burrer remembers that her mother was careful not to prepare greens for the table unless she was familiar with them. At this time many of the colonists died from eating poke berry root, and a poisonous wild spinach…

Mrs. Burrer was present at the founding of Fredericksburg. She has seen it grow from a settlement in the wilderness, into a city with a population of several thousand. The hardships she endured as a pioneer have taught her the value of food and clothing.. Many of the conveniences of modern life, which are regarded as necessities she knows as luxuries. When she hears complaints of hard times, she says, "Dann fuchle ich als ob ich sprechen muss!"

Here is some excellent early history of the old historic town of Saint Jo, TX and of Montague County. Mentions: an old, old graveyard, where the first residents of the town of Saint Jo and a number of Indians are buried. * Dove Bellah who moved to Montague County in 1873 * the town consisted of a few houses and two saloons * are Dr. J. D. Crump,, J. H. Boggess, Parson Phillips and Dove Cunningham * The first store selling general merchandise was put up about 1890 by Mr. Bellah in one of the old saloon buildings * The town was laid off by Joe Howell * Sherman * Denison * the Indians and their famous stronghold northeast of the city. * the Devil's Backbone * Giles Gordon * Gordon's Pass * Tyler's Bluff * a white man named Tyler * the old Montague road west of Saint Jo * the present town of Sunset on Brushy Creek, in the northwestern part of the county * Mr. G. K. Martin of Granger, Texas; Mr. Starr Bryden of Kerrville, Texas, and Mrs. W. F. Bickenbach of Mason, Texas