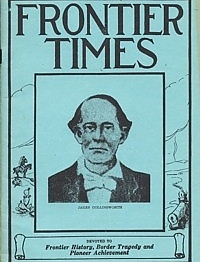 Account of JAMES T. COLLINGSWORTH who President Houston on October 26, 1836, appointed as attorney general but be declined the office on account of personal circumstances. He was seated as senator from Brazoria District. Nov. 30, 1836, to serve out the unexpired term of William H. Wharton who had accidentally been killed. On December 26 of that year Houston appointed Collingsworth in 1838 while a candidate for the presidency against Mirabeau B. Lamar and Peter W. Grayson was drowned in Galveston Bay. He was born in Tennessee in 1806. He attended the public schools

and then studied law which-he began to practice in 1826. In 1830 he became a United States district attorney which office he held until 1834, coming to Texas when his term of office expired and located in Matagorda Municipality.

THE FOLLOWING sketch details the massive legacy of the Yellow House Ranch, the Land holdings and the history of Yellow House Canyon. One hundred and fifty thousand head of cattle were placed in this pasture, and the Yellow House became the principal division headquarters of the biggest cattle ranch in the world. Ask the old cowpuncher to name the one ranch he thinks most entitled to fame and distinction, and nine times out of ten he will say: "The Yellow House Ranch'."

THE SEVEN CITIES OF CIBOLA

When Cabeza de Vaca and his companions were wandering through Texas, Chihuahua, (probably Sonora) and Sinaloa, from 1528 to 1536, in search of fellow Spaniards in Mexico, they heard the Indians talk of the rancherias or settlements-generally temporary-of Cibola; and romance of that era fixed upon seven as their number, and wove around them much absurd fiction. The Seven Cities of Cibola have been placed generally around the Zuni pueblo (with Zuni itself as one of 'of them) of New Mexico, but, as a matter of fact, they may have been any place from the Staked Plains to the Hopi villages. This is the story.

The Then and The Now

They came, they lived, they loved, they wrought,
There were times even when they fought;
The Then was theirs, the Now is ours Let us then bring some fragrant flowers,
Let us brighten each passing day,
Ere these old men all pass away.
They wrought for us, they fought for us,
They won a mighty land for us, Their memories to us are dear,
We'll not forget, no, never fear.
Hard was their long and daily toil
To wring from new and stubborn soil A meager living, build a home…

The End Of The "Seminoles"

Lieutenant Bullis was in charge of several troops of colored men, called Seminole Scouts. At some distant day, perhaps, they were a part of that tribe of Indians which infested the Florida everglades. But to the untrained eye they looked like Negroes, acted like Negroes and consequently were treated as Negroes.

Living in the valley below the old mission was a prominent settler named "Humpy" Jackson. He had several daughters who were recognized as beauties over a wide part of the frontier. The cowboys were all friends of the Jackson family and it would not be overdrawing the statement a bit to say that about half of them were in love with the girls. An old government sawmill was in operation a short distance from "Humpy 's" home, and several of the Negroes, or Seminoles, were stationed there. Among the number was one called Jim-Lanky Jim. He had caused a lot of trouble in the settlement by insisting that he; had a right to associate with the white people. His impudence was very offensive to the settlers, and he had been reprimanded a number of times, but it was not until he had written a note to one of the Jackson girls that the frontier of toleration was reached.

The event triggered brutal slayings and the vivid account of this story.

Brief account of "Big Foot" Wallace, a Virginian who came to Texas as a lad to join an older brother, only to find that he had been killed with Fannin's men by the Mexicans at the Goliad massacre. That may account for Wallace's later fame as a fighter of the Mexicans. His nickname of "Big Foot" was not derived from any physical peculiarity but from his sworn feud with Big Foot, a celebrated Comanche chief. "'Wallace trailed him many times, but never succeeded in killing him. Fate ruled that Shapeley Ross, the Texas Ranger leader, was to have that distinction.

One incident in Wallace's life shows well the mettle of the man. He had joined the ill-fated Mier expedition into Mexico in 1842 and was one of the survivors who were taken prisoners to Saltillo. There Santa Anna, the Mexican dictator, ordered that one out of every ten of, the Texans should be shot, the victims to be decided by having them draw from a jar filled with white and black beans. The men who drew black beans died. One of Wallace's companions was a young fellow who had a wife and child waiting for him back in Texas. At the thought of them he broke down: and cried as the drawing began. Wallace had just drawn a white bean, but at the sight of the grief-stricken boy he thrust it into the hand of the young man and whispered "Here, take this one. I'm feeling lucky today." Then he plunged his hand into the jar again and drew another white bean...

A Typical Pioneer In The South Plains

Account of Charlie Vaughn who was born In 1869, in Christian county, Kentucky but who came to Texas in 1892. He reached the little village of Lubbock, which in 1892, boasted a population of some fifty souls. With a capital of less than five dollars, he began looking around for a job. All of this enormous area was then in the hands of big ranchers, and the cowboys at that time were in their glory. Finally by down-right hard work and perseverance, he reached the cowboy class. Eventually he filed on a fine tract of land in the northeast part of Lubbock county and continuing his outside work he slowly improved it, and eventually developed one of the finest ranches in the region. This is his story.

Mentions: George Boles * Idlewild Stock Farm of Lubbock * Rolly Burns, boss of the noted I. O. A. Ranch * Emos Seeds, one of the earliest settlers in this country * Colorado City * "Grassland" * Miss Emma Winn, daughter of one of the pioneer preachers of this county * Joe Coleman *

Story of ongoing litigation involving a patent granted by the king of Spain in 1814 to a tract of 7,000 acres of land in what is now Zapata county. Mentions Jose Luis Ramirez * The case was tried in the district court of Webb county in the early part of 1929 *

Account of blood engagement between Indians and certain Hamilton county citizens in winter of 1860 or '61. The event occurred on the divide which separated the waters of the Colorado and Lampasas, otherwise known as Lookout mountain. Here is the story.

To the cowboys who rode the range in West Texas during the nineties there was one longhorn steer that was always an object of dread. He was a big, white fellow with "Murder, 1889" branded in huge letters on his left side. His appearance among their herds brought a chill of terror to the superstitious, for this steer was said to have been responsible for the killing of at least nine men and it was believed that his coming to a ranch invariably meant another tragedy. This is the story.

This is the Sixth of a fifteen-part installment series of this quintessential Texan hero, frontiersman, Indian fighter, soldier, patriot and Mier captive. Duval does a masterful job capturing the character and uniqueness of the man and advantageously borrows heavily from Wallace’s own personal diaries, quoting from them at length. Wallace, from the old Scottish hero-heritage of the Wallace and Bruce clan, carried his noble blood to many escapades of which the history of the great state of Texas will forever be grateful and stands proud to call him one of her own sons. We can supply you with the rest of this great series – just email us for details.

IRA LONG WAS born on May 27, 1842, in Indiana. He was reared in Northwest Missouri, and when but 19 years of age was commissioned lieutenant in the Confederate Army under Captain Faulkner. He fought with honor and distinction and then settled in Texas to a colorful and eventful career as a cowboy and ranger. This is a lengthy and detailed account of the great man.

HERE IS EXCELLENT EARLY HISTORY AND GENEALOGY OF MARLIN AND FALLS COUNTY, TX

Thamos Killebrew Barton, better known over the country as "Uncle Doe," was borne in the village of Marlin August 20, 1855. His father, L. B. ("Little Berry") settled within a mile and a half of the present site of the courthouse February 7, 1847. The sturdy pioneer Barton family has played a leading role in the development of Falls county. Here is the story.

ABOUT SIXTEEN miles southwest of. San Antonio and a mile from the main road, high and alone on the crest of the only hill between San Antonio and the gulf, stands the old Jones mansion, which is also known as the "Castle of the Medina," and "Jones Ranch House," according to the tastes and habits of the person who alludes to the stately old mansion.

It stands today just as it stood when it was first built 60 years ago, solid and substantial, the proud monarch of all it surveys, and seemingly as much an inevitable and enduring part of the landscape as the hill on which it stands. Many persons prominent in every phase of the life of San Antonio, during those 60 years are identified with its history, and look back to bounteous hospitality enjoyed there as the pleasantest times in a happy childhood, the most delightful seasons in a gay young man-or womanhood, or the most sheltered and contented times after troubles of later years. This is the story.

Account of the Pueblo Indians and their annual harvest festival celebrated annually, on September 30, where the 500 inhabitants of the two massy terraced clay community houses, which rise tier to tier to the height of five stories, celebrate the most important of their tribal feasts and dances-the festival of San, Geronimo Day; dedicated, ostensibly, to their patron saint, but really a thanksgiving to the sungod for the harvest.

This festival, so old that the patriarch's of the Pueblo know not its beginnings, each year attracts spectators from all over the United States, and is attended as well by other Pueblos, by Apaches and Navajos. Accommodations for the Americanos are found in the adjacent town of San Fernandez de Taos, two and a half miles by a good road, where the Mexican population of the surrounding country add their fiesta merry-makings to those of the Taosans.