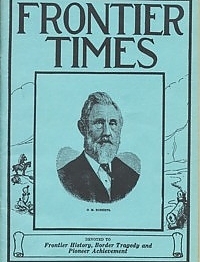 Brief account of prominent Texas lawyer and politician, Oran Milo Roberts, who established a law school at Gilmer, Texas, and in 1874 was for a second time appointed Chief Justice of the Supreme Court of Texas. In 1878 he was nominated and elected Governor, and was reelected in 1880.

Account of Judge William P. Doty, a surveyor for over sixty years in Texas, responsible for much of the original survey work around Dallas and Fort Worth in the 1870’s. In 1875, he came to what is now MeCulloch county, and bought a sheep ranch. Doty held a number of offices during his forty-two years residence in McCulloch county, among them those of county judge, and superintendents of schools. But he spent most of his time on his ranch, or on surveying trips. Judge Doty married Miss Flora Boudinot in 1878; a daughter, now Mrs. J. R. Stone, was born to them. Mrs. Doty died in 1908.

WATER WITCHING IS TRUST GIVEN, NOT ACQUIRED

COULDN'T' FOOL THOSE GRADUATES OF MCGUFFEY'S

Excellent account of origins and early history of the fort located above Menard on the head of the San Saba river. Fort McKavett was among the most famous forts in the numerous campaigns against the Comanche and the Kiowas. This is the story.

From The Confederate Home

Story offers information and facts concerning the Confederate Home at Austin by one who was an inmate of this Home eleven years. It is a testimony to the greatness of the state of Texas that she cared so well for those who fought for her freedoms.

"One time a rancher near the line between Karnes and Goliad counties decided to bury a considerable amount of money that lie had on, hand. Choosing an especially dark night, he went down to the cowpen and, after removing one of the fence posts dropped his bag of gold in the post hole He then replaced the post and went to bed satisfied that he had put his treasure where moth and rust could not corrupt nor thieves break through and steal. After a year or two had gone by he needed the money and went to get it. lie failed to mark the particular post under which it was buried and time had obliterated all trace of his work. There was but one thing for him to do and he did it. He dug up post after post until he came to the right one, and by that time half his pen was torn down."HE METHODS OF business

The greatest question agitating the minds of the people was whether a prize fight should be held within the borders of Texas, and it caused as much excitement, perhaps, as the warmest political campaign known to the State. James J. Corbett, then the champion heavyweight pugilist of the world, and Bob Fitzsimons, who later became the champion, had announced a championship pugilistic contest to be held in Texas. The affair was promoted by Dan Stuart, of Dallas, who was very prominent in the sporting world at that time…

This is the seventh of a fifteen-part installment series of this quintessential Texan hero, frontiersman, Indian fighter, soldier, patriot and Mier captive. Duval does a masterful job capturing the character and uniqueness of the man and advantageously borrows heavily from Wallace’s own personal diaries, quoting from them at length. Wallace, from the old Scottish hero-heritage of the Wallace and Bruce clan, carried his noble blood to many escapades of which the history of the great state of Texas will forever be grateful and stands proud to call him one of her own sons. We can supply you with the rest of this great series – just email us for details.

The North American Indian Of Today

George Bird Grinnell (written 1898, describing the unique struggles of the Indian and his forced adjustment to the ways of the white man’s world at that time.

The history of the intercourse between the white race and the red, if studied will lead the thoughtful American to feel that some consideration is due from us to them. If we can divest ourselves of prejudice-a hard thing to do-we must acknowledge that the Indians ought to be treated honestly, and therefore justly, as they have never yet been treated. Our prejudice against the race is merely that of an enemy. In fighting, in massacres and surprises, in, the treatment of the dead who have fallen in battle, we who are civilized have little to boast of over those who are savage. The stories of the Chivington fight, of the Dull Knife outbreak at Fort Robinson, and of the Baker affair in Montana, where of the one hundred and seventy-six unoffending Piegan Indians killed in the surprised smallpox-stricken camp only eighteen were fighting men and the rest old men, women and little children, show that there are two sides to the history of Indian warfare.

Mentions: the Algonquin family, the Ojibways, Blackfoots, Cheyennes and Arapahoes *

The Captivity Of The Savage Children

This is a heart-wrenching account of a man named S. S. Savage, who lived three miles from Mineral Wells, in Palo Pinto county, who with his eight-year-old brother, was captured by the Indians and lived with them for eight months. He was five years old when captured. At the time his father was killed and an older brother was wounded by the Comaanches. By the time these little boys were returned to their mother they had become so "Indianized" that at first they were afraid of their own mother, refusing to associate with other children and had to be carefully watched to prevent them running away.

Mentions: The father of these boys was an early settler of Parker county, coming to Texas from Missouri and first locating in Grayson county * the Savage farm * "up on the Washita," in the Arbuckle Mountains * an Indian trader named John Field *

Legend Of A Dead Man Who Lived In Texas Is Revived

If traditions are to be relied upon, John Wilkes Booth spent a number of his fugitive years in Texas. This is the story.

Indianola ! Thursday's storm! A day of danger and night of horror ! Terrible loss of life ! One-third of the fated town swept away. A heartrending scene of desolation. Two hundred lives lost. Total destruction of Saluria by the maddened waves.

No-wait, gentle reader; this isn't a report of another tropical hurricane that has struck the gulf coast. The above exclamations are newspaper headlines of the memorable storm of September, 1875, which destroyed the one-time powerful port and city of Indianola.

They are the headlines of the Victoria Advocate of September 24, 1875, which "covered" the storm with a completeness that would do credit to the thorough-going modern press of 52, years later, W. T. Crowley, news dealer of Victoria, 40 miles from the sight of the long vanished Indianola, has a copy of the paper, yellow with age and worn into pieces. Here is the story.

HERE IS SOME EXCELLENT EARLY HISTORY AND GENEALOGY OF HASKELL COUNTY, TEXAS

Even the "doctor's" long and tedious harangue over the health-giving properties of his wonderful remedies is endured as with sleep-heavy eyes awake so as not to miss the thrilling ghost-scene that is promised to close the program. Anybody knows who has ever attended one, that a medicine show is no show at all without at least one ghost-scene in its list of nightly attractions. It may be that the word FREE, in large letters over the entrance, is the source of much of its drawing power, even for persons of mature years.

Of course, there was the black-face comedian that drummed out music and performed all kinds of acrobatic feats on and around a very much used old banjo. The "doctor" cracked a few jokes and told a story or two before introducing his goods.

That agonized look on tire darky's face! I can see it yet. His eyes seemed to pop out of his head. The ghost slid toward him, the darky promptly slid away; then as the "ghost" came closer, the Negro slid away to the very end of the bench. Then when the "ghost" reached out and started to lay a hand on him, the black man lifting his arms and leaning far back pleaded in trembling accents "D-d-doan' you-all touch me-M-mm-is-ta ghostman. A-a-hain't dunnuthing-deed Ah ain't."

On May 11, 1846, the United States declared war against Mexico. During the autumn months of 1845 General Zachary Taylor's army of occupation arrived in Corpus Christi and camped on a site which is now the center of the city's business section. Here is the story.