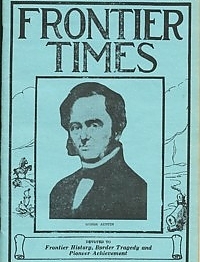 Account of the father of Stephen F. Austin. It was Moses Austin’s early intitatives that led to the work that his son, Stephen accomplished in the early Texas settlements and colonies for which he is rightly famous.

Sixty-six Years With the Indians

Account of Millie Durgan, a captive of the Kiowa Indians for sixty-six years. Remarkable story.

Account of William Sanders Oury, including an escape from the Alamo, participation in the battles of San Jacinto and Monterrey, service in the Texas Rangers and traveling across country to California during the gold rush in '49.

Account of William D. Godkin, important early KC resident and veteran. Mr. Godkin was born July 4, 1836, in. Brockville; Ontario, Canada, son of William G. Godkin, who came to America from Bailey Canew, Ireland, in a sailing vessel. The family settled at Brockville, an old trading town, and then moved to Rock Springs, where the forest had to be cleared before a log house was built. Here the six children were reared. He came to Kansas City in 1865 and was naturalized about 1871.

The Killings of Rube Burrows

Account of the bloody death of Rube Burrows, noted bandit and robber.

Back to 1838 at Clarksville

Excellent very early history of Clarksville, TX, the Donoho family and the area which used to be Miller County Arkasas.

Continued from Last month – Some very enjoyable first-hand observations of early Texas life through the eyes of the great Indian fighter, soldier, Texas patriot and rancher.

Tells of An Indian Fight

Account of Mr. A. G. Mills, Gideon Mills and people who came to Erath county, Paluxey River area in 1854 - excellent early history of the region.

Dumb Heros of the West

Excellent early Bell County history and story of this great family of early settlers in the region.

"THE RANGE CATTLE INDUSTRY" -- A Review

Some Animals of the Southwest Lengthy and detailed account of how the early pioneers viewed buffalo, mountain Lion, snakes, bears and other animal residents of the frontier

Seller’s note: If you want EXCELLENT early (we’re talking about the origins) history and genealogy of BELL COUNTY, TEXAS that is extremely rare, here it is!

Bell county was created in 1850. by an act of the Texas legislature, and named after P. Hansborough Bell, who was governor of Texas from 1849-1853. As it was first created, a strip of territory six miles wide, including the towns of Troy and Oenaville, was left in Falls county. This strip was given to Bell county in 1856.

The first settlements in the county were in 1833 and 1835. Bell county was included in the Sterling C. Robertson survey. During this period Michael Reed and sons, John, Jefferson and William; Moses Griffin, Goolsby Childers and sons, Robert, Frank and Thomas, Col. Sparks, Mr. Davidson, Judge O. T. Tyler, Wiley Carter, Mr. Taylor, and wife, located here. The Taylor family located about 3 miles east of Belton, where the present day site of Taylor's valley is...

Detailed description of the materials used and the manner of forming and using the early weapons of the savages of the frontier.

The Osage and the Kansa tribes are held to have had the best bows-not that their workmanship was superior but because they managed to get hold of the most suitable wood. The Osage and the Kansa called it smooth bow, the Omaha knew it as yellowwood, the French voyageurs as bois d'are. It was procured along the Arkansas River. It did not grow well north of Kansas, and where it was not available ash, white elm, or ironwood was used, because they would take on a polish and would not warp when exposed to wet weather. The general preference was for young ash killed by a prairie fire, because then it was sure to be well seasoned.

The wood for the arrow was selected with equal care and handled with equal patience. Experience had taught that the more serviceable were the ash and a species of dogwood, known to the Omaha, Ponce, Osage, and Kaw as arrowwood. Of the latter, saplings were preferred on account of their straightness and freedom from knots. Mature ask, on the other hand, was taken, the sapling being too pithy and soft. Both woods can be polished and are flexible. When neither ash nor dogwood was obtainable, wild cherry was used, but only in emergency, since this wood breaks easily. The shafts were cut the desired length and roughly shaped, then tied in a bunch and hung over the fireplace to season. Etc, etc, etc

Account of E. L. Haddix, of Waco, conductor on the Cotton Belt railway, and an active railway worker for-sixty-one years. Mr. Haddix was born in Indiana in 1848, and began his railroad career in 1869. His first railway service was as brakeman with the Kansas City, St. Joe & Council Bluffs Railway. He was advanced to the position of conductor in due time, and in this capacity he served the Union Pacific before coming to the Cotton Belt. In the forty years that be served the Cotton Belt as conductor, Mr. Haddix scored a perfect record. The road was never called on to pay one cent by reason of carelessness or negligence on his part.

Mrs. Laura Lara, of Rio Grande City, Texas, claims to be 140 years old. The venerable woman has no birth certificate, since the record of the churches of, Northern Mexico were destroyed during the revolution, but her recollection of past events and the testimony of her relatives seem to leave no doubt that she is as old as claimed.

Mrs. Lara was a grandmother when General Robert E. Lee, then in the United States army, was at Fort Ringold during the war with Mexico in 1848. She was 58 years. old then, she says, and had several grand children.

Mrs. Lara says she, remembers General Lee well,, and was his laundress while he was at Fort Ringold.