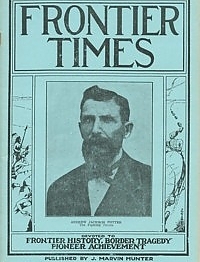 On the Cover – Andrew Jackson Potter

San Felipe de Austin, on the west bank of the Brazos River two miles east of Sealy in southeastern Austin County, was founded in 1824 by Stephen F. Austin as the unofficial capital of his colony. It was a leading center of trade and the unquestioned social, economic, and political center of the Austin colony, which stretched northward from the Gulf of Mexico as far as the Old San Antonio Road and extended from the Lavaca River in the west to the San Jacinto River in the east. This is an eye-witness account of the town from the eyes of one of it’s most notable early residents, Noah Smithwick.

By W. F. Ledlow. As soon as Texas gained her independence from Mexico, the larger churches in the United States began to plan its evangelization. Early in the year 1837, the Methodist General Conference appointed Dr. Martin Ruter, a very scholarly and influential gentleman, the first "Superintendent of Texas Missions." Dr. Ruter had served his people as Conference Secretary and as College President and fully appreciated educational needs.

Dr. Ruter resigned his position as president of Allegheny College, and cheerfully entered the mission field. He reached Texas in October, 1837, and began work immediately. "Texas needs a college," was almost his first remark. He talked a college and insisted that it was imperative for his work. Dr. Ruter visited the Congress of Texas in session at Houston and discussed his plans with several influential men. He received much encouragement, and secured several substantial land donations. So eager was he to establish the college that he selected a location, wrote a charter, and named the school "The Bastrop University." But Dr. Ruter's unexpected death May 16, 1838, delayed this worthy enterprise.

In August, 1838, ten representative Methodists met at a point near Bastrop and agreed to buy a league of land and to establish a college. It seems that to their number they added another and organized themselves as the Board of Trustees. They secured the land that Dr. Ruter had selected as a site, procured a charter, and founded Rutersville College. The institution was incorporated February 5, 1840.

Pioneer Recalls When Privations Lot of Everyone

Account of W. R. Robertson, Hall county pioneer, came to TX from Dyersburg, Tenn, first settling at Willow Wallow Creek at a point near Bowie, but there was no Bowie and no railroad there then. With his elder brother Henry he started farming in that section, passing up Gainesville Prairie because they looked on it as poor agricultural land, arid and unproductive. Later, the two of them settled at a place called Salisbury. Among the cattlemen in those days Willow Wallow was called "Paradise" because of the fine grade of corn it produced. He lived in a dugout with a brush-arbor front stoop. People suffered real cold, real hunger and loneliness then, and there wasn't anybody to blame it on, he explains. The nearest trading point was Sherman, seventy-eight miles away. Still later the Robertson brothers moved farther into the new country-Sherman county, boasting at the time eight qualified voters.

(Continued from Last Month.) The following intensely interesting story of the well known Methodist circuit rider, who was born in Charito county, Missouri, April 3, 1830. He was the son of Joshua and Martha Potter, natives of Kentucky. In early years, wild, rebellious, routy and untamed, he eventually became a fierce Indian fighter, soldier, teamster, frontiersman, and preacher, whose fame and courageous reputation preceded him and whose respect was legendary. The story recites many of his thrilling experiences while in New Mexico, Arizona and Texas in those stirring days when the Indian and the desperado made life unsafe. This is the fourth account of several installments in Frontier Times.

By John Warren Hunter. Interesting account of Civil war era Masonic Family named Thomas who moved from Alabama to Texas and settled in Hopkins, county. After the sad death of both parents the youngest girl, Erin was taken captive and after some period of time was discovered by rangers who identified her as offspring of faithful Masons. They secured the girl’s safety just before she would have been slaughtered by Indians who brutally destroyed the place where the girl was staying. Story gives early historical details regarding Masons and their practices in early Texas.

Fighting Prairie Fires on the Plains in the Early Days

An excerpt: "On nearing the fire we found a, few cattle and from the lot we selected and killed a cow and cut its head off, split it down the backbone and belly, making two drags, leaving the hide on. I think I am the originator of this style of fire fighting with drags from the carcass of the cow. from these two drags the cowboys would tie a rope, one to the front foot and one to the hind, leaving the flesh side down, then each would mount their horses, tying the rope to their saddle horn, and one riding on each side of the line of fire, dragging the carcass sacks half over the fire. They could ride at a good trot and the drag would blot out most of the fire. As soon as the drag started, one in each direction, the balance of the crew would follow up with wet sacks, putting out the remaining fire left by the drags. We fought this fire about two hours and had broken the line and worked about a mile when we met several men who had succeeded in holding the north side of the fire in check, so we turned and joined our other men who were traveling with the fire, holding in to the line and making some headway in keeping it from spreading. We all working hard and the heat was stifling to the men and horses. The wind carried the cinders and ashes to the nostrils of the men and the hot blasts were punishing us greatly…

By Henry W. Dailey. Account of early history of Southwest Texas in general, of Karnes county, Frio county and especially of notable, gunman, sheriff, and frontier character, Alfred Y. Allee, a native son of the adjoining county of DeWitt, having been born there on May 31, 1855, but was living in or near Karnes county in the year 1882 when his troubles began.

By Charles L. Martin. This is an amazing account of an amazing woman: Miss Marie Isabel Boyd, known as Belle Boyd, the only woman Confederate spy. She was born May 9, 1843, in Martinsburg, Va. (now West Virginia), part of the Shenandoah Valley, not far from where the immortal Stonewall Jackson was born and reared.

An excerpt: The Confederates serving in Virginia all knew of her and not a few had the honor and the pleasure of knowing her personally. If her life and career during the four years of the war were given in detail, it would read more like the broadcast, hectic imagination of a dreamer…"She knew all the risks she was running, but they did not daunt her courage, serving only to make her more determined in aiding the South and by whatever means. She even resorted to treachery. One day she went out riding with two Confederate soldiers, one her cousin. When near the Federal lines, her horse broke suddenly at full speed toward the Federal lines, she screaming for help so appealingly that the, picket guard let her pass without firing at her. Within the lines she was shown every courtesy, readily obtaining leave to return home, charmingly accepting the escort of two officers. As the three rode along, suddenly from ambush the two Confederates with ready revolvers halted them.

"Here are two prisoners I have brought you," she calmly informed her friends. The prisoners, asking the name of the lady, she smilingly replied, "Belle Boyd." "The rebel spy" was their only reply."

CHRISTMAS DAY, 1872, was a red-letter day for Denison, Texas, for it was then that the first railroad train ever to enter the State of Texas from the North came to a noisy stop in that town, after having crossed the newly completed bridge over the Red River. The man who piloted the wood-burning locomotive was P. H. (Pat) Tobin, whose energetic work in helping to construct the M. K. & T. railroad into Texas had won for him the distinction of being the engineer of the train that inaugurated regular services between Texas, and points north. On Christmas Day, 1932, Denison celebrated the arrival of the first train to that city with proper ceremonies, and this same Pat Tobin was in the cab of the locomotive, serving as "Guest engineer" as a result of his desire to thus observe the sixtieth anniversary of an event which marked the beginning of the real growth and development of Texas. Account goes on to detail that early event and provides good early Denison history.

Further Mentions: Mr. Tobin, Dr. A. W. Acheson, then a young physician, A. H. Coffin, 82, then a young surveyor engaged in helping to plot the Denison townsite preparatory to its incorporation; old No. 15, a Grant straight-back type of locomotive; communities in North Texas, among them Sherman, which was an ambitious and growing town; Major L. S. Owings; Charles E. Maurice.

Account of the robbery of a Santa Fe train near Brownwood, Texas, in 1890, when the robbers killed Brakeman J. T. Penn. In those days train hold-ups were of frequent occurrence, but the officers of the law usually ran down the robbers and put them out of business. This account details the event of this notable robbery and murder.

STILL CARRIES A BULLET IN HIS SHOULDER

Blanco and Llano county was the scene of C. C. Patton, of Dripping Springs who carries a bullet in his shoulder which was fired from the gun of a fleeing brave. The shot which wounded him was fired by an Indian at Spring Valley in 1867, after Patton had shot the brave's horse from under him. Another settler, William Heidemann, was slain by the Indian.

Indian fighting in those days was a thing not to be avoided. Old and young sallied forth to meet the marauders. It also was in '67 that the Indians made an appearance on Curry creek. Among the men who took up their guns and chased the braves up the Big Llano river was Patton's grandfather, Samuel Patton, then 84 years of age. The grandfather was considerably wrought up when a younger man wanted to take his gun and do his fighting…

One of the oldest houses in Texas still standing is the old General Lewis place, formerly known as Elmwood. This was the first frame house built in that section of Texas. The old Lewis home, or "Elmwood" as he called it, is north of Houston in Montgomery county. This is the story of the notable dwelling.