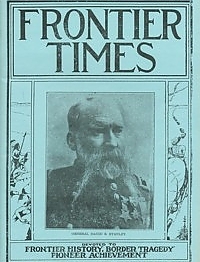 Further Mentions: four great routes for a Pacific Railway was planned and Lieutenant Stanley applied for a detail as one of the surveying parties and was the Quartermaster and Commissary of the survey under Lieut. A. W. Whipple, Topographical Engineer, which left Fort Smith, Ark., July 24, 1853, and arrived at San Diego, California, March 26, 1854; Captain James Henry Carleton; Lieutenant Keneer Garrard; Adjutant Alfred Pleasonton, 2nd Dragoons; Lieutenant George B. Anderson; a soldier by the name of Mattock who had fourteen arrows in him. He bristled with them like a porcupine. Three of these arrows had gone so far through him that the surgeon extracted them by cutting off the feathered part of the arrow and pulling them through the man's body. In two week's time Mattock was walking around and his only disability was finally from a superficial wound, which had lacerated a nerve; Assistant Surgeon Eben Swift; Brigadier General Eben Swift; Major Earl Van Dorn, 2nd Cavalry; Lieutenant Camp; Camp Verde, Texas; Lieutenant Fitzhugh Lee, later the distinguished Confederate general; Camp Radziminski; Forts Smith, Washita, Arbuckle and Cobb; Col. Thomas Ellwood Rose, 77th Pennsylvania; Kirby Smith's army in Texas; Duff's Frontier Battlion. This man Duff was a Scotchman; General Arbuckle; Fort Sully, D. T; the Northern Pacific Railroad.

We Once Had a Foreign Legion

By Colonel C. C. Smith. After the Civil War, when the army was re-organized, it became necessary to obtain officers from several sources, one of which was the commissioning of many foreigners who had made excellent records in the war. In addition many Irishmen and Germans enlisted to serve in the ranks, but the military academy of West Point could not sufficiently accommodate an adequate number of cadets to supply the Army with officers. Many officers from overseas filled the ranks. This article contains a list of countries where officers were from, the information coming from the Official Army Register of 1868. But especially detailed in the account of one special foreign officer, named Major Charles C. De Rudio, 7th U. S. Cavalry, whose career was as gripping as that of any character of fiction. He came to the United States at the beginning of the Civil War. He was of the Italian nobility, and a young man when selected with Felice Orsini, Tieri and Gomez to go from Italy to Paris for the purpose of assassinating Napoleon III, which attempt failed. Further Mentions: Officers listed from Ireland and one in England ; a total of nine foreign born. In the 15th Infantry 33 officers are listed. Of these 29 are non-graduates. The list shows one was born in Sweden; one in Germany; two in Scotland; one in Ireland, and one in Canada; a total of six foreign born. In the 3rd Cavalry 42 officers are listed. Of these 34 are non-graduates. The list shows two were born in Germany; eight in Ireland; one in Switzerland, and one in Scotland; a total of twelve foreign born.

In the 5th Cavalry 44 officers are listed. Of these 39 are non-graduates. The list shows five were born in Ireland; one in Germany ; two in England ;one in Canada; one in Scotland; one in Belguim, and one in India; a total of twelve foreign born. In 1868 there were five regiments of artillery in the army. These too, had their share of foreign born officers. The 1st Artillery for example, had 60 officers, according to the Army Register of 1868. Thirty-two were non-graduates. Five were born in Ireland; one in Scotland, and one in England; a total of seven foreign born.

In 1868 the Colonel of the 31st Infantry was Philip De Trobriand, a Frenchman, who in the Civil War had been a Brigadier Cen. of Volunteers and a Major General by brevet. An echo of the service of General De Trobriand in our army came to the late Brigadier General L. L. Durfee. John J. Coppinger, an Irishman, appears as a Captain in the Register of 1868. He had reached the grade of Brigadier General in 1898. Mentions Major Marcus A. Reno, Capt. Benteen; Terry's relief command; sergeant Thomas O'Neill; old Scotch Major, Thomas McGregor; Sir Henry Lauders.

DIES AT HOME IN SPRINGTOWN AT THE AGE OF 114

Mentions death of B. L. (Black) Shirley, 114 years of age, who died at his home in Springtown, eighteen miles north of Weatherford. His age was well authenticated. Some of Mr. Shirley's friends claimed him to be the oldest man in Texas. He served in the Union army during the Civil War, enlisting at Hamilton County, Tennessee.

Mr. Shirley was born in Sequatchie Valley in Tennessee, and was the youngest of a family of fifteen children. He grew to manhood in the Tennessee mountains, and came to Texas in 1880. He married in Tennessee and to the union five children had been born at the time the Civil War opened. Three years after the war ended, his wife died. Mr. Shirley, having married again, the family came to Texas and settled in Parker county.

Account of Tom (Booger Red) Privett, Erath co. The number of wild horses that Booger rode during his life would be impossible to estimate, but he must have averaged at least two a day for fifty years and that makes about 40,000 wild rides. Booger lost some of them, but never one in the show ring. He would travel many miles just to engage a horse of bad reputation. He was somewhat like a Texas ranger for the bad horses, it was his job to show them that they were not so bad. His skill with horses was almost miraculous. He could look at a wild mount and tell just about what kind of pitching he would do and he never refused any of them. After he became famous the big circus secured his services. For several years he was associated with the likes of Buffalo Bill, the cowboys and cowgirls with Hagenbeck and Wallace, J. George Loos carnivals, and the Russell Brothers.

The Mystery of the Wild Woman of Lineville Bottom

J. W. Morris, Freeport, Texas. Strange account of an event that occurred in the Lineville bottom, a great thicket in the south side of Wharton county, running down the line of Brazoria and Matagorda counties extending on both sides of the creek. The wild woman of Lineville was the beautiful auburn haired woman who was apparently abandoned in the thicket and was seen screaming for mother, fleeing from every noise or sight of living creatures. In her mad flight and deluded mind she eluded all searchers and her tracks were lost. No doubt she fell by exhaustion in one of the thickets and died there alone. She was often seen flitting through the woods like an angel of despair, often screaming for mother and home. No voice of kindness and gentleness could stop her in her mad flight. She lost her other shoe, fragments of her dress were found on the thorny briars and her blood-stained foot prints were found in the sand where she crossed the creek. In a few days the search ended as no trace of her could be found. This is the story.

(Continued from Last Month.) The following intensely interesting story of the well known Methodist circuit rider, who was born in Charito county, Missouri, April 3, 1830. He was the son of Joshua and Martha Potter, natives of Kentucky. In early years, wild, rebellious, routy and untamed, he eventually became a fierce Indian fighter, soldier, teamster, frontiersman, and preacher, whose fame and courageous reputation preceded him and whose respect was legendary. The story recites many of his thrilling experiences while in New Mexico, Arizona and Texas in those stirring days when the Indian and the desperado made life unsafe. This is the sixth account of several installments in Frontier Times.

Z. N. Morrell. Morrell, due to ill-health and drawn by promises of productive land and opportunity in the west, embarks from Washington on the Brazos, westward, into regions that were as untamed as any on the frontier regions west of the Brazos in 1838. He details many exciting, dangerous and historically relevant events in this excellent narrative.

The story of Charlie Wall, Tarrant county grapevine farmer, went unchronicled for 25 years. In 1923, however, he himself decided there no longer was any reason for keeping the story secret, and he sought out the same friends with the suggestion that it he written.

Nearly all of one night he sat and related the incidents over again to G. T. Blndworth, then the superintendent of the South Fort Worth schools. With the telling, there grew up the idea in his mind of outfitting an expedition into the South American country to reclaim the treasure he was sure remained as he had buried it many years before. Before his ambition could be realized, and before he had finished the relation of the full story, he was killed by accident.

This account is from the pen of G. C. Greenwood, a resident of Lampasas county, Texas for over sixty years. No man stood higher in the estimation of the community than did the writer, and his statements will be taken for face value.

A. H. Conner Has Seen Brady Grow into City

Account of A. H. Conner of Brady, one of the outstanding pioneers not only of West Texas, but the entire Lone Star State. Conner was born and reared in Fort Worth. In fact, Mr. Conner claims to be the first white child born in Fort Worth, and that was in 1850. After living in that city several years, he moved to Brady, landing in this wild, West Texas country on May 6, 1876. There he lived for 57 years, from the time when there was not the slightest sign of a town. In fact, only two houses stood in this neighborhood, and Mr. Conner, a carpenter then, shingled the roofs of the log huts. The county seat at that time was at Rochelle, where the few ranchmen in this section bought their supplies and belongings at the one store. Voca was the biggest settlement however, with about 10 families, while only seven lived in this section. This is definitely excellent and hard to find early McCulloch co. history.

Mrs. John Knight is a pioneer who recalls when settlers from a radius of several miles congregated in the little village of Canyon, TX, barricaded themselves inn the courthouse and threw tip trenches in defense of oncoming Indian attack in 1891. It was probably Texas’ last Indian scare. Canyon at that time was without a railroad or telephone and telegraph facilities. Supplies were hauled in from Amarillo, about 18 miles away. The first report of the raiding Indians was brought in from that city by a resident hauling supplies. The following day the driver of the mail hack verified the rumor.