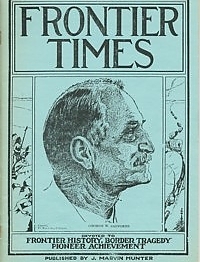 The Trail Boss Passes On

Story of George W. Saunders , well-known San Antonio area cattleman. The name of Saunders is inseparably linked with the old trail-driving days of the cattle industry. At 17, he drove his first, herd across the plains, through swollen rivers and past the menace of Indians to the market at Abilene, Kansas. As the ranks of the band of pioneers were thinned by time, in 1915 he, was the founder of the Old Trail Drivers' Association and, two years later was elected president, a position he held continuously thereafter. Saunders was born at Rancho, Gonzales County, February 12, 1854. His parents came by ox wagon from Mississippi. When he was five, the family moved to Goliad County and the lad rode a pony and helped keep up the tail end of the herd. While his father and oldest brother were serving in the Confederate Army, young George and another brother looked after the cattle. Possessed of and daring, Saunders swam the swollen, raging Witchita with a rope in his mouth so that a raft might be ferried across, after four other men had tried vainly to carry the rope to the other shore. Frequently he was chosen as the spokesman when large numbers of hostile Indians barred the way of the herds. On one occasion, Chief Bacon Rind and Sunset, accompanied by a vindictive pock-marked half-breed and 200 Kiowas demanded tribute. When the amount Saunders offered was rejected, he was suddenly pinoned before he could defend himself and 50 buffalo guns were leveled at him by the. braves. His own men, numbering 35, drew their weapons but Saunders, realizing…

Recollections of Mrs. Augusta Keller Grunder of Cuero, a survivor of the devastating 1875 storm which destroyed the port city of Indianola, the town which one time served as gateway to Texas. This gripping eye-witness account is from the scene of an upper floor that was threatening to cave in at any minute under the fury of the hurricane.Further Mentions: Port Lavaca, Prince Solms Braunfels, a pier was built at what was called Powder Horn. Matagorda Bay, 15 miles from what is now Port Lavaca,. Emma and Cary Klein, Claud Keran, Anton Keller, who lived on Bay Street, Henry Keller, Mrs. Tips, Henry Remschal, the Eberharts and the Kimples. In the block facing Main Street lived Henry Kuester, Valinteen Leinhard, George Weil and Mrs. Kaapkey. In the block next to us were the homes of Louis Kleinecke, Mrs. McClanahan, Tom DeViny, George French. The Presbyterian Church, which was the only church not wrecked. Fredia Goldman of Victoria, the little school where Professor Colston taught,

The Indian massacre which brought to a tragie conclusion the San Saba Mission on the San Saba River near Menard is deseribed in letters obtained by Dr. Lota Mae Spell, assistant librarian in charge of the Genero Garcia collection of documents and books.

An Indian Raid Near Laredo

By Col. M. L. Crimmins, U. S. A. Retired. Describes the Raid which occurred in Duval and Nueces Counties which cost the lives of at least eighteen persons and the wounding of five others. The bloody raid occurred during tile third week of April, in 1878. Includes a list of those who were killed and involved in the raid.

By L. D. Walters. Interesting account of betrayal, duplicities of three outlaws in Lordsburg, N.M. "Little Dave, Dutch John and six more members of the outlaw gang … held up and robbed the Tombstone Benson stage of eight bars of gold. Each member of the gang, taking one bar of gold as his share, paired off, and each pair rode in a different direction. Little Dave and Dutch John chanced to be paired together and stated toward Lordsburg. They had been two, days and nights without sleep and Dutch John repeatedly told Little Dave that the first man who fell asleep would loose his bar of gold and his life too. Little Dave stated that he was well enough acquainted with Dutch John to' know that he was fully capable of carrying out his threat. When stopped at Granite Gap to make fee and rest their horses, Dutch John removed the saddle from his horse, threw it on the ground and then sat down and leaned his back against it. Little Dave volunteered to rustle wood, build a fire and get the coffee started, knowing that activity would prevent him from going to sleep. Dave obtained the axe from the pack and collected a lot of dry wood, which he threw down as close to Dutch John as he could without exiting his suspicion, and then started to cutting it into suitable lengths for the camp fire, He worked around until he was within good striking distance of Dutch John, and noticing that John's eyes were closed, he struck him with all his strength and John settled down a little lower against his saddle and was dead instantly. Dave then took both bars of gold…"

Max Coleman, Lubbock, Texas. Account of the famous "Yellow House Ranch", in Lamb County, TX, the brand being X I T, probably the most widely known of any in the world. The three million acres here were formerly a hunters paradise and owned by the Comanche Indians. The ranch at one time employed numerous cowboys, many as wild and untamed as the Indians before tliem.

W. J. Ellis, former trail driver, Miles, TX recalls the bloody massacre of 300 white persons at Mankato, Minn in 1862. Mr. Ellis was a boy of eleven years living with his aged grandfather, Andrew Thompson, on a farm 18 or 20 miles southeast of New Elm, Minn. Five hundred Sioux bucks, on the warpath, swept down on New Elm one day and killed three hundred men, women and children of the little Swedish town in the edge of the reservation. This was the beginning of the Sioux atrocities which ended with Custer's last Stand. One of the most brutal deeds of the massacre was the burning of forty women and children in a wooden barn… Further Mentions: Wood Lake, Hole In the Day and Medicine Bottle, Judge Henry Moll, soldiers at Fort Snelling.

Texas of Yesterday, Today and Tomorrow

This is an excellent shorter account of Texas history and development from the earliest time of Cabeza de Vaca, 1535 up until the latter 1800’s along with prospects for future state development, from that perspective of history. Excellent introduction to TX history.

When Texas Was Legally Under Six Flags

Texas, through her history, has always been a border region, occupied first by the Spanish, for a time by the French, and at length permanently taken over by the United States. It was the scene of a conflict among nations, and in the background of that conflict ever lurked the savage Indian with bow and arrow, horse and gun ready to plunder scalp and burn, and spread terror throughout the land.

With such a settling and such a situation Texas history must be interest filled as it is with heroism, pathos, and tragedy-a drama of nations played on a stage of far-flung plains, forests and mountains. Across that stage pass many figures-Spanish conquerors on horseback, black-robed priests, proud French explorers, English and American adventurers, Indians, Texas Rangers, cowboys and soldiers. Each ruling period and each governing nation had her flag which she waved proudly over the rich spoils of Texas.

Mentions the passing of a great woman - MRS. Elizabeth Bacon Custer, widow of General George Armstrong Custer, who was killed by the Sioux Indians on June 25, 1876. She was ninety-one years old. "Mrs. Custer, who for many years was one of the most picturesque residents of the Murray Hill district, was a gallant campaigner in her own right during the stirring days when her husband fought the Indians in the West. As his youthful bride, she refused to stay at home, and virtually all of her married life was passed near scenes of battle. Adventures followed one another in quick succession for the gently bred Elizabeth Bacon, of Monroe, Mich., who had been captivated by the "boy general with the golden locks," marrying him in her twentieth year. Mrs. Custer preserved her bright spirit to the last. Mrs. Custer was born in 1844, the daughter of Judge Daniel S. Bacon. She first met General Custer when he visited his sister in Monroe late in 1862. He was then a captain in the Union army and only twenty-three years old. They fell in love at first sight, but Miss Bacon's parents opposed the match, and young Custer…"