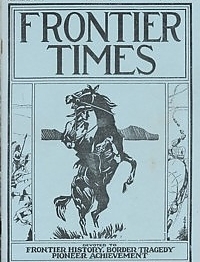 Mentions: the N-Bar-N ranch in Eastern Montana , Will C. Barnes, western writer and for many years connected with the United States Forestry Service, "The Stampede on the Turkey Track Range. ", R. J. Stovall,

It was half a century ago that Tucker had the fight that gave him the name that has clung to him ever since There never was such a battle before and there never will be again, pioneers will tell you. The irresponsible murder of a 14 year old boy, raised Tucker’s wrath, and the result was a series of fist fights in which the wiry 175-pounder was the invariable victor. So from that day forth Tucker was known as "Fighting Bill."

Era of Wool and Sheep in Nueces Valley

By Coleman McCampbell. From 1870 to 1880 sheep raising was the most profitable industry in Nueces and Duval counties. Land was cheap and, unlike other sections of the, Southwest, there was no friction between the sheep-owner and the cowman. There were over a million sheep, (Capt. Richard King had over 40,000 at his big cattle ranch) in the two counties; and, for several years, Corpus Christi was the largest wool market in the world. It bought and shipped annually from seven to twelve million pounds of wool. This is the story.

By Houston Wade. Compilation of data/names relative to the devastating "Dawson's Massacre".

A Page From the Past

Williamson County Sun, Georgetown, Texas. Speaks of W. S. Mullens, area pioneer and frontier character whose life was marked by numerous exciting experiences, with law breakers, cattle rustlers, and bad men. Mr. Mullens settled at what is known to this country as Mullen's Hill, a high point located about five miles from where Florence now is located and twelve miles from Gorgetown.

By H. H. McConnell. Ongoing, detailed and day-to-day journal recounting McConnell’s experiences are further related in this installment of his excellent story. An excerpt: " Ours" had now been more than five years in Texas, and from the nature of things, and the "customs of the service," it was not likely it would be our fortune to serve much longer in the State. "Grapevine" stories were afloat, and rumors originating in the Adjutant's office gave color to them, that we were to be relieved, in consequence of which we were not much surprised one day in February, 1871, to learn that orders had been promulgated transferring us to the Department of the Missouri, the change to take place as soon as the Fourth Cavalry relieved us. The prospective of change was hailed with delight by most of the officers, but was generally regretted by the men, to whom Texas had become endeared in a thousand different ways. Many of the soldiers had married, others had formed attachments and friendships more or less permanent; nearly all of the men who had been discharged from time to time had settled in the country, and many of them were doing well. Furthermore, there is an ethnological fact (?) that no one ever leaves Texas after they have been there a certain length of time. They either can't or don't want to, or it may be is, the old settlers used to say, "having once drank Red River water, it was not possible to go back;" the fact remains. few People seem to come here with a view of staying, but they do stay, and have stayed until nearly three million are here, and there are "more to follow. "

Biggest Single Business in the World Amazing statistics and history of the United States Postal Service...