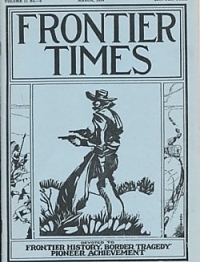 A Bakery of Pioneer Days

Very lengthy and detailed account of early settler, Conrad Wehmeyer and his family of Fredericksburg. Depicts lengthy and troublesome life of a pioneer settlement. Conrad Webmeyer was born in Huttenhausen, Westphalia, Prussia, February 16, 1816. In Berlin, where be was a soldier in the regiment of the Crown Prince Frederick, who later became Frederick III of Prussia. Came into area with manby German Immigrants, many of whom are named in this article: Sussmann, "Stadt Creek.", Herman Hitzfeld, who was a "tischler", (cabinet-maker,) the Adelsverein, the Verein, Louise Klingelhoefer, Johann Jost Klingelhoefer, Eibelshausen, Amt. Dillenburg, Herzogturn Nassau, the school in Dillenburg, Lungkwitz, Apoteke Muller, Heinrich Kespohl, wilnn Huttenhausen, Westohalia, seven of their nine children grew to maturitv, and scattered, from home. Pauline and Robert died in infancy. The other children, in order of age, are: August Wehmeyer, who died at Quincy, Ill., in 1929: Sidonie, (Mrs : August Sembritsky) of Fredericksburg. Alwine, (Mrs. August Weber,) who died in 1929, Elise, (Mrs. Richard Tatch) of San Antonio. Adolph Wehmeyer of Fredericksburg-, Bertha, (Mrs. W. C. Kiehne) of Menard, and Emma, (Mrs. William Mueller) of Fredericksburg. Baron's Creek, or Stadt Creek as it is known in "Fredericksburg Deutsch," Saenger and Schaper, Mr. Guenther, Mrs. Tatsch, Schmidt, Albert Keidel.

A Cowboy and a Scout of Texas

by Crawford E. A. Laxson, Pearsall, Texas. Detailed and eye-witness account of early cattlemena nd scouts at turn of century along the border with Mexico in the Big Bend area of West Texas.

Indians of the Country

by Beatrice Grady Gay, account related by Mr. Williallim W. Hunter (the Patriarch of Coleman county) of Santa Anna, Texas. First-hand account of experiences and particulars of the settlement of central Texas. An Excerpt: "In the fall of 1870 the Indians made one of the worst raids into our county that had ever been made since we had been here. There was a family named Williams who lived farther down Mud Creek just across the line into Brown county. Our place on the Jim Ned was only about a mile from the Brown county line. Mr. Williams was out in the woods cutting logs not very far from home, and his wife and their three children were at home alone. About the middle of the afternoon Mr. Williams heard screams from the direction of the house and started on a run towards it. When be came near he could see that it was entirely surrounded by a bunch of painted, screaming Comanches. Being unarmed he could do nothing to save his family. The Indians killed his wife and boy outright. They tortured the baby, either by dragging it through the fire at the end of a lariat, or by just dragging it, causing burns from…