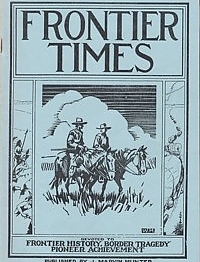 By H. Conger Jones. The Seminoles are a mixed race, composed of Indian and negro blood in about equal proportions. They originated in Florida, where the native Seminole Indians held a number of negroes as slaves, whom they had stolen from the white settlers farther north. Slavery in the white settlements was to be preferred to that in the Indian villages, but the luckless black after being taken from his white master into the swamps of Florida, had no choice in the matter. After the Seminole war in Florida the United States Government removed the Indians with their slaves to Oklahoma, then Indian Territory. About 1,850 in number migrated to Mexico, where the former slaves intermixed with their masters and eventually outnumbered either the full-blood Indian or Negro. However they did not mix with either native Indians or Mexicans and continued to live a life apart, becoming versed in border warfare, combining the craft of the Indian with the trait of the negro. In 1871 the garrison at Fort Clark was being harassed by small parties of Lapin Indians, and unable to secure friendly scouts from among the tribesmen to assist the soldiers in running down these thieving bands, Lieut. Bullis (later Gen. Bullis) received authority from Washington to enlist a company of Seminoles as scouts. Thus there was organized at Eagle Pass, Texas, early in 1871, an enlisted detachment of Seminoles, who, with their families…

Mentions further: Picayune John, one of the most colorful of the early scouts, having come from Mexico with the original group in 1871. "Picayune John was given this title due to his fussiness over small matters and was so entered on the muster rolls of the Army. Picayune John was guiding a detachment of soldiers on one campaign against a combined group of Comanches and Lapina following a trail north of Brackettsville. However, the detachment seemed unable to overtake the fast traveling tribesmen, but John was constantly on the alert for fresh signs and the troops soon became exasperated with him, believing the enemy faraway. On one occasion a camp was made and the usual precautions taken as to guards and outposts, but no special. detail was named. This did not suit John very well and he complained to the officer in charge who laughed at his fears, however, the -old scout elected to sleep outside the camp boundaries and at midnight gave a resounding alarm; the entire camp was aroused and looking out over the plains saw approaching shadows by the hundreds stealing upon them. The outposts fired into the surrounding darkness, only to learn that… Mentions further, the scouting of Renty Grayson at Kickapoo Springs, located between Brackettville and Rock Springs, in a hair raising brush with the tribesmen and their renegade white friends. Palo Duro Canyon, Fay July, Tib Kibbetts, Pompey Factor, Joe Dixon and John Bowlegs, etc.

HORACE ELLIS. Excellent account of the heroism of the courageous Mormons,who, braving storm and scores of insurmountable difficulties drove by physical force those fragile push carts, often laden with sick children or worn-out, infirm parents, over steep mountains, across swift streams, and through trackless sand wastes, without murmur or complaint, and all for conscience's sake. Many details and names/places mentioned such as: Bringham Young, camp on Sugar Creek, Iowa, Council Bluffs where they established themselves in winter quarters, The camp at Florence was christened Winter Quarters and was intended as a sort of half-way rendezvous between the Sugar creek camp and Zion., Onialia, Fort Leavenworth, trapper Jim Bridger., etc

Reminiscences of a Pioneer

By Mrs. Emma Schooler, Sheffield, Texas. Father was William Porter, a machinist, in the state of Pennsylvania.who came to Texas after the close of the war between the United States and Mexico and enlisted as a volunteer in the army under General Taylor. Her mother Anna Sarah Sheldon, lived with her uncle, the Reverend Chauncey Richardson, noted Methodist divine and educator. They were married by the Rev. Richardson, in December, 1850. Mrs. Schooler writes with eloquent detail and clarity in this fairly lengthy narrative of early days on the frontier – a great story.

Mentions further: a college building at Reutersville, Texas. The college was a wonderful educational institution for those days, The school itself was moved to Georgetown, Texas in after years.Weimar, a family by the name of Youngblood living on what was then the frontier, in Gillespie county., G. W. Conover of Anadarko, in charge of the commissary at Fort Sill during much of the Indian warfare. Satauta, Satank and Big Tree, Laurie Tatum, the Quaker Indian agent, Colonel Grierson, Horace P. Jones, Mitt Day, Packsaddle mountain, the ranch of Buck Roberts, on Sandy Creek., Round Mountain, Onion Creek, an old man by the name of Moore, Comanche, Kickapoo, Dripping Springs, Hays county, the murder of Garian Hinds, in the year 1867, a man by the name of Clay Biggs, Zavalla county, two of the Moss boys, William Moore, Bob Ayers, and Dick Duncan, the Packsaddle fight, the last of any importance in and around Blanco county, Tom Felps a Mr. White, who lived on Cypress Creek, Spring Creek, a small tributary of North Grape Creek. Hickory Creek etc.

Archer County News. Big Tree was buried in the Rainy Mountain cemetery near his home. He is survived by two daughters, Mrs. Alma Ahote and Mrs. Marietta Haag, who lived in the Rainy Mountain community, about three miles southwest of Mountain View in Kiowa county. Unlike most of the other Indians, Big Tree was married only once. Big Tree and Satank were taken to Jacksboro, Texas, and tried for murder, found guilty and sentenced to be hanged on the first day of September, 1871. Their sentence was later commuted to life imprisonment and after several years of confinement in the Texas penitentiary they were paroled upon good behavior. But later Santanta violated his parole and was sent back to the penitentiary, where one day in despair he committed suicide by jumping from the second story of his prison to the pavement below.

By Henry T, Fletcher. SOUTH OF THE Southern Pacific Railway, at Marathon lies the Marathon Basin. Once a great rounded dome, it is now a plain, surrounded by high mountains, with a number of broad valleys separated by parallel ridges of red and white novaculite that shine in the bright sunlight. Most of these valleys are watered by running streams and springs issue from the bases of many of the perpendicular cliffs. This is a splendid cattle country and a part of the famous Highland Country. The most noted spot in the Marathon Basin, is Pena Colorado, about four miles southwest of Marathon. It is the boldest spring in the region and is the head of a running stream that empties into Maravillas Creek, some ten miles below. Pena Colorado, with its cascades and limpid pools, shaded by giant cottonwood trees, is one of the beauty spots of Brewster county. But it has not always been known as a place of tranquility. This was major large cattle ranch country and sometimes these boys didn’t see eye to eye!

Mentions further: a ranch house by the Combs Cattle Co, Rev. Greenwood, in the early days a ranchman in Kinney county, the A. S. Gage Ranches., the Presidio Land & Cattle Company, established by the Gages and associates about 1890. The old Circle Dot headquarters ranch, established soon after the railroad was completed to Marathon in 1881. This ranch was owned by M. Halff & Brother, of San Antonio, then among the largest ranch operators in Texas. Elkanah M. Hereford, born in Missouri in 1815, and buried here in 1886. He was known as Old Man Hereford, Billy Kincaid, who lived for years in Brewster County, Jim Davenport, Terlingua Creek at Cigar Spring, The G4s belonged to General Gano, of Dallas, and was incorporated as The Estado Land & Cattle Company Captain J. B. Gillett, the boss, Pink Taylor, Bass Outlaw and Joe Meyers., John A. Ward, H. J. Bowles, Jack Duncan who was hanged at Eagle Pass for murder. Henry Reynolds who was buried at Alpine, Rossell Pulliam who was killed by Jim Gillespie in the Post Office at Alpine, Ranger Joe Meyers., John Selman, peace officer and bad man., Cotulla, Ranger Captain Will Wright,

By G. F. Hunter. Interesting shorter account of medical practices on the frontier. An excerpt:

"It is yet remembered that on one occasion the writer had a spell of old time chills and fever, the doctor rolled out 6 or 8 of those blue mass balls, that he called pills and said. "Take one of these every three hours, until you take five. Then in two hours take two tablespoons full of castor oil, then in an hour commence taking these powders" handing me what looked like about a half package of soda, which on unrolling I found to be small doses of quinine, about a heaping teaspoonfull to each one. "Take them every 2 hours." On trying to swallow one of those blue mass cannon balls I had to shut both eyes, spit on my hands and strain like the dickens. In taking the quinine it was recommended that it be desolved in molasses then stop up both ears, shut both eyes, hold your breath " dammit and eat it." This was the instructions given by Dr. J. G. McFarland, one of the pioneer doctors of Burnet county, who by the way, was a good and successful doctor, and our family physician for many years, in fact until his death. I remember one time he came to see my father who had pneumonia, arriving from Burnet, about sun down. It was a cold day, and a sixteen mile drive. So the doctor went in, and after examining my father's condition, turned to me and said: "Young sprout your father is very sick, I am going to stay here to…"

Honeymooners in South Texas of 50 Years Ago

Brief account and summary of the massive effect made upon the American frontier by the great expedition.