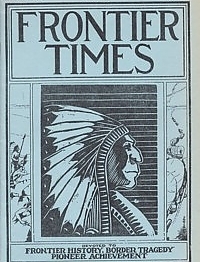 (Editor's NOTE-The following prize-winning essay was first published in the Dallas News, and later in the History Teacher's Bulletin of the University of Texas for December, 1927. Miss Chevies Ross is a graduate of the Sulphur Springs High School. In the foreword she says: "In writing this essay I have endeavored to give an interesting and accurate account of Watt Moorman as the leader of the Regulators. Much of the interesting history of Texas has never appeared in print--especially that of East Texas. I am deeply indebted to Mr. J. C. McDonald, of Sulphur Springs, for allowing me to use the history material that he has compiled. All of my material, with the exception of the origin of the Regulators, is taken from original manuscript written for publication by Dr. Levi H. Ashcroft, then of Tyler, Texas. For some reason this material has never been published.")

Mentions Further: 1844 Shelby county , Regulators and the Moderators., Charles W. Jackson, Charles W. Moorman was born in -Mississippi in 1815. His father was a planter of moderate means. Watt received an education such as could be acquired in a country school. He was naturally of a reckless disposition and every piece of mischief perpetrated in his neighborhood was laid to his door., Shelbyville, Miss Daggett, Naid Moorman, Henderson, Panola, Nacogdoches, Sabine and San Augustine, General Sam Houston, Shelby county, Mrs. Wiseman,

Ads in Early Texas Papers Real Mirrors of the Times

BACK IN PIONEER days of Texas the merchant was a modest chap in his newspaper advertising. In his ads he always called himself a "subscriber" and always "begged leave to inform the public" of what he had to sell. Students of' history frequently go through tile old newspaper files in the archives at Austin, but overlook the advertising pages, which picture the times as well as do the news articles of that day.

From John Henry Brown's "Indian Wars and Pioneers of Texas'

IN THE FALL OF 1833 the Parker family came from Cole county, Illinois, then to East Texas one or two came a little, earlier and some a little later. The elder Parker was a. native of Virginia, resided for a time in Georgia, but chiefly reared his family in Bedford county, Tennessee, whence in 1818, he removed to Illinois. The family, with perhaps one exception, belonged to the Primitive Baptist church, commonly designated as Two Seed Baptists.

IN THE DIM PAST men worshipped the Rio Grande. To the men who deal with it now it is a river with a personality. Born in the snows of Colorado, the Rio Grande mystifies, blesses and menaces before it finally merges with the semi-tropical waters of the Gulf of Mexico.

GREAT grandfather was a native of Ireland. He came to the United States very early, was in the Revolutionary War between the United States and Great Britain, and was killed at Minnes Fort, Georgia; the date I do not remember. My grandfather was a native of Georgia, married there, and moved to Mississippi in 1809. As far as I remember he served as a deacon in the Baptist Church, being a member of the First Baptist Church that was constituted in Texas. He died at the age of eighty-seven years.

An account taken from the interesting little booklet entitled, Rodriguez Memoirs of Early Texas," written by Judge J. M. Rodriguez, and published shortly after his death in 1913. Great description of old San Antonio days and peoples: 'The people of pure Spanish descent who lived here in the early days had very few commercial pursuits, and there was just enough at this time to provide the necessities of life that the town required. We had plenty to eat, but no great luxuries. We raised enough cattle and sheep for our own consumption. Our food was mostly corn, bacon, fruit and vegetables. There were…

The life of this Methodist preacher is a story of adventure, exploration and conquest.

(EDITOR'S NOTE-The above article is of much interest to early Texans, many of whom knew Orceneth Fisher. There came with him to Texas in 1841, among other members of his family, two sons, Sterling and Orceneth Alsbury Fisher. ) Orceneth Alsbury Fisher, Sabinal Canyon, in Bandera county, Sterling Fisher, West Texas Conference, Mrs. Rebecca Fisher, known as "The Mother of Texas," was the widow of Rev. Orceneth Fisher, mentioned in in the article above. She was his second wife. After her return to Texas from the West she resided in Austin, and lived to a very old age., George T. Fisher,, Mrs. A. B, Harper, Mrs. Sidney Fly of Hondo; Mrs. R. M. Wentworth of Utopia; Mrs. R. D. Harper of Banquette, and Mrs. Gordon Laughter of Edna, Texas, Miss Mary Susan Simonds

Vivid account of the shocking and terrible cyclone which hit Cisco, Texas, suddenly and without any warning on the evening of April, 1892. The area had been suffering terrible drought, and the sight of the clouds on the horizon appeared to be an omen for good, when suddenly…. More than fifty people were killed, hundreds were injured, and property damage amounted to …"Friday one of the finest towns in West Texas, full of life, energy and business stood here. To-day all this wealth and life is gone. Friday happiness was in hundreds of homes and peace in thousands of hearts. All this is changed in a night. This is a city of ruins, a city of moaning and of broken hearts."

Mentions further: Eastland, Cottonwood or Ranger, "As they got closer they seemed to gather in intensity and blackness, too," says Mr. Maxwell, who is one of the heaviest losers. There was nothing extraordinary about their size or appearance to indicate the coming disaster. "

PRESENT DAY opponents of capital punishment, who shudder with horror when a criminal is sent to the scaffold, would have plenty of material for their arguments back in the '80s ' when Federal Judge Isaac C. Parker, known over several states as the "Hanging Judge," tried 13,580 criminal cases over a period of 21 years, the Kansas City Journal-Post relates Judge Parker convicted 9,560 men on various charges and sentenced 88 to death, according to the records of Fred E. Sutton, 1626 East Seventy-seventh street terrace, Kansas City.