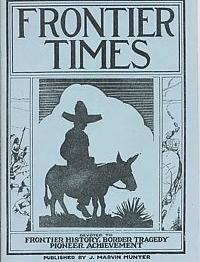 San Antonio Express. On the night of March 11, 1884, Ben Thompson and John King Fisher were slain in the Jack Harris Vaudeville Theater at Commerce, and Soledad streets, San Antonio. This double killing probably the most famous in crime annals of, is yet food for discussion. There remains in the minds of many old timers, who have had the story handed down to them, some doubt of how many actually had a hand in the killing of these ace marksmen in the gun-toting era. A coroners' jury impaled the day following, gave as its verdict that Jacob S. Coy, special officer in the combination vaudeville and gambling house and Joe K. Foster, himself fatally wounded, had laid low Thompson and Fisher.

By Henry Yelvington. Tells of the Irish settlement in 1830 known as San Patricio along the banks of the Nueces River some 30 miles from the present city of Corpus Christi, was named in his honor because of its Irish complexion. It was a 100 per cent Irishmen, James McGloin, and his partner, John McMullen who fostered but one ambition, that to show the world the Irish could get to the top in any situation. With a charter obtained from the Mexican government in 1828, they had a thriving settlement named after the patron saint of their home land by 1830. Instead of driving the green snakes out of Ireland, as St. Patrick is credited with having done, they were engaged in subduing the wilderness, fighting off Indians, killing rattlesnakes and trying to make happy homes right up against a Mexican garrison which maintained in the old mission at Lapanticlan, just across the Nueces. But this Mexican garrison proved an advantage in many ways in those early days because of the Indians about and only when Texas started out to acquire independence did it prove a detriment. Great early genealogical history of Irish in this area.

Further Mentions: The Irish of Refugio. The main difference between the Irish of San Patricio and that which was founded about the same time, is that the Refugio Irish all came directly from Ireland, while the Irish of San Patricio were recruited from new arrivals in Kentucky, New York, Louisiana and Ireland. That "freedom" was uppermost in their minds, is found in the fact that at Goliad on Dec. 20, 1835, months before the official declaration of Texas independence, Phillip Dimmit, an Irishman from San Patricio, with many Irish followers from that place and Refugio declared that "Texas ought to be a free, independent and sovereign state," Afore proof of this assertion is found in the fact that on Nov. 6 of that same year, Ira Westover came over from Refugio with some more Irish, and enlisted a good many more at San Patricio and went over the Nueces to attack the Mexican garrison under Gen.Marcelino Garcia at Lapanticlan. This was one of the very first battles in the Texas struggle for independence and was first cousin to the battle of Gonzales. The Irish ire was at high pitch after the battle and it was following that the Irish went to Goliad and decided Texas ought to be free. Mentions yet further: Impressario John McGloin, James McGloin, "The Little Lady in Green," John Lynn of Victoria, Saint Paul's Academy which was founded in 1876 by Robert Dougherty who received his education in the Jesuit College at Bardstown, Ky, George D. Prentiss, John McMullen, Miss Elizabeth Sullivan, the Dougherty ranch, Mary Agnes,

A LARGE COLLECTION of letters in the original written by General Sam Houston while a member of Congress from Tennessee and later while President of the Texas Republic, to his favorite cousin, John H. Houston, resident of Washington, is in possession of descendants of the latter Houstons. They are Misses Harriet, Gertrude and Emily Houston Garland, granddaughters of John H. Houston. In the collection are fifty or more personal letters from the liberator of Texas which have been stored away with the family mementos for more than 100 years. Many interesting details are recorded in these letters.

Further Mentions: a, letter from Lancaster, S. C., April 20, 1825, General Houston told that friends had started his run for Governor of Tennessee in the face of some hostility and in the midst of a political upheaval, but that he did not like to quit Congress if his "dear constituents" wished to send him back….another, From Arkansas Territory, July 31, 1833, General Houston told about settling in Nacogdoches to practice law. He had a retainer of $2,000 a year and in two weeks had collected $750 in other fees. This letter explained that he had acquired an interest in 150,000 acres of land, the locality of which was not given, but informed his cousin that "Texas is the finest portion of the globe that has ever blessed my vision.", in another letter he mentions the anniversary of my flogging Stanbery.", Yet Further Mentions: cousin, F. Catlett, secretary of the legation to the United States from the Texas Republic. the coming of General Green, President Jackson., Stephen F. Austin, Houston's visit to the Hermitage with James K. Polk.,

Z. N. Morrell. A detailed and lengthy account of Gen. Adrian Woll's daring invasion of Texas and bold capture of the Texas Supreme Court in San Antonio, while it was in session.

The Affair at Anahuac and the Battle of Velasco

John Brown. Both of these great historical events are discussed in light of their role as precursors to the revolution which followed.

80 Year-Old Doctor Still On The Job

By Mrs. Martha Williams. Account of a robbery that "might have been" during author’s youth in Liveoak County.

By G. F. Hunter. Interesting account of fashions of the frontier, in the 1870's and early 80's. An excerpt: In 1870 the dresses were made so they easily touched the ground and then some. When they walked you could hear the swishswish of the dress as it swept the floor or ground. But my recollection is that at that long ago time, women, and girls were easier to look at than men or boys. After a year or two women began the wearing of hoops. Before this started it required about 8 to 10 yards of calico or muslin to make a dress for just one woman. After the fashion of hoops came in it required from 14 to 16 yards to make a dress, for a woman. Some of these hoop sets were at least 6 feet in diameter. All the new houses, log built in that particular period were built with extra wide doors in order that the ladies could pass in and out without disturbing their dresses. Of course when they tried to pass through the old fashion 4 to 5 foot doors they had to reach down with both hands and press the hoop skirt in on each side and walk in edge ways. When a young man wished to give his girl a box of " Shu fly " candy-price 5cts. or a "chaw" of cedar wax with, and always with, stretch berries in it, he pitched it to her. Couldn't get close enough to hand it to her without bumping into her six foot hoops. At the church house there was close to the door a large elm stump that leaned over at an angle of 45 degrees on the, top, wore smoothe and slick, of which we used to, on Sunday, place our love offerings of "Shu Fly" candy, cedar wax, extra large pecans, or necklaces of Kenilkenic beans. Then when our girl came out of church we would yell "There she am." By this means the lady could walk up of course on the leaning side of that danged old stump and with very little effort secure the burnt offering without in the least disarranging her mighty hoopskirt."

THE FEET of Big Foot Wallace, famous Texas Indian fighter, were not big, according to Mrs. Annie Grimes of Fort Worth, who knew Wallace. Popular conception for nearly a century has credited the big fighter, whose battle with an Indian in a West Texas canyon is a gem of Texas history, with wearing shoes size 14. "Big Foot used to visit in our home a great deal and his feet really were very small for so tall a man," Mrs. Grimes said. Mrs. Grimes is the widow of Ranger Lieut. A. C. Grimes, who served in the old Frontier Battallion. There are two conflicting stories of how Big Foot got the name….

Finds Story of Indian Fight in 1856

Account of Chris Emmett's Book, "Texas Camel Tales," a simple, straight-forward narrative, rising at times to exceptional dramatic intensity, is this impressive autobiographical tale of a soldier's experience in the A. E. F. The author is Chris Emmett, lawyer and writer, whose book was published in 1932. Emmett was a non-commissioned officer in L Company, 359th Infantry, 90th Division, and it is to the men of this division---'30,000 strong ... a division which contributed 8,010 blood sacrifices upon the altar of the world-holocaust"-that he dedicates his stirring book, which has just been released by the publisher, The Naylor Company, of San Antonio, Texas. While a flood of war books has poured from the presses since the momentous date of November 11, 1918, too few have accurately presented the viewpoint and experiences of the, American soldier of the ranks. Emmett entered the Army with a small group of Texas friends, and with this group he managed to remain until his military service ended. He could have had a commission, but he deliberately avoided promotion so that he could fight shoulder to shoulder with his buddies. "My experiences," he writes in the Foreword.

Stunning account of the adventures of scout, Jim Neal and his partner "Cap" Vosburgh in the 1880's. The two had for years had been "pardners" in many hazardous adventures. They never expressed in words their friendship for each other; they were pardners, and, as they put it, "liked each other's style' -that was enough. Because of their friendship, the chief of scouts, General Lawton directed them to work together. He had great confidence in their united ability. Further Mentions: GERONIMO, the most terrible of Indian chiefs, General Miles, the Patagonia Mountains, The Tontos, the Chiricahuas. the Sierra Madres;

An excerpt: Without waiting for any response, Vosburgb pulled his horse up sharply and began to fumble in his pockets. Then he searched his saddle bags and s tratclied his head. Jim rode on along the trail up the canyon. Slowly Voshurgh pulled his horse round, and leaning over and peering at the ground as if he were looking for something that he had dropped, rode back along the trail. Then slowly be dismounted and scratched about in the sand. He knew that every Indian rifle, was leveled at him, but he moved with calm deliberation. The Indians were completely puzzled, and nervously awaited his next move. Meanwhile Jim had ridden out of range at the other end of the pass, and the, troops were, approaching the entrance of the gorge, Vosburgh had to turn them back before they should enter the pass.

Slowly mounting his horse, he, spoke a quick word to him, swung low on his neck, and with a yell was off down the canyon. There was a moments pause, and then a hundred startled Apaches fired together! A thunderous roar reverberated along the hillside and was thrown back from the echoing cliffs...