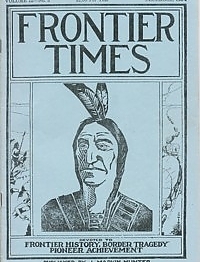 By Marjorie Rogers, Marlin, Texas. Very interesting historical work on the efforts of the Spaniards, to subdue the Indians to the Catholic faith. It was a massive failure. Writes the author: Although missions were built in many places over Texas-the work was not a success. "The method of confining the natives, accustomed to a free and wandering life, in pueblos in a condition much akin to slavery, and forcing them through a tiresome round of formal services and of manual labor, was hardly calculated to make them love either Christ of the Spaniards. One of the arguments used against the system of colonizing by missions and presidios was that experience had proved the results to be wholly incommensurate with the cost. The auditor Altamira, writing in 1744, asserted that the total expense to the royal treasury of the colonizing work in Texas had been three million pesos, and that the annual cost of keeping up one establishments was then sixty three thousand. The expiring flicker of missionary energy came with the founding of Refugio, below LaBahia, towards the coast, in 1791. Twenty years later several of the missions had still a few Indians around them, but in 1812 they were finally suppressed and the Indians dispersed by the Spanish, government," says the author of The Failure of the Spanish Way. Nevertheless, the culture of Texas has been forever gifted with the Spanish influence of these early efforts. Texas would not be Texas without this great influence.

Charles A. Gianini. The story of a mysterious mine. No lost mine, in the southwest has had more advertising and search than the Adams Diggings. While the mine has been searched for in Colorado, Utah, Arizona and New Mexico, the scene has usually been placed in the San Mateo Mountains in what is now the Datil National Forest. What about "Magdalena" NM? Pyearl Hulse, a ranchman at Canyon Creek on the Middle Fork of the Gila, Bob Lewis, an oldtimer who has been ranchman, prospector, game warden and peace officer, a man named Davidson, San Carlos Indian Reservation,

Contributed by her son, T. J. Jett, San Antonio, Texas. Very excellent early history of San Antonio by longtime resident, Mrs Jett who was born in West District, Payette county, Tennessee, on July 8th, 1835, the oldest child of Absolom Kuykendall, and Nancy (Dean) Kuykendall. Settled on the Sabine River in Texas, where there was a fort, in the section known as the "Redlands." Then moved into Houston county, settling near the Neches River. Then to Fayette county, occupying a place some eighteen miles east of La grange.

Further Mentions: September, 1842, when the Mexicans made a raid into Texas, capturing San Antonio. a Mr. Townsend, the battle of the Salado, Jerome Alexander, the Medina River in Bexar county, Mrs. Honeycut, the three plazas, Alamo, Main and Military. the stone wall along San Pedro Creek, The Mavericks who lived on the Alamo ditch. a place owned by James Truehart on the Alamo ditch. General Worth of Mexican War fame, the Medina on the Jett Ranch, Stephen Jett and James Madison Jett, a man named Schultz, a Mr. Bateman, Virginia Point, Griff Jones, a brotherof Enoch Jones. the Perezes, the Ruizes, the Garzas, Francisco Ruiz, who was forced by Santa Anna to burn the bodies of the Texans at the Alamo -- a good old man, and would always warn whenever be heard of Indians or bad Mexicans being, in the neighborhood, Captain Connor's company. Mission San Jose, Bexar County, Sulphur Springs, Williams, Mr. Carruthers, Mr. Henry Price, Mustang Prairie, Mr. Avant, Sibley's Expedition, Mann Crossing,

Bv J. C. Duval Account of dramatic and surprising hand-to-hand fight between Wallace and with an Indian whom he met face to face in a canyon. An excerpt: "…the last time I threw down the Indian a deep gash was cut in his forehead by the sharp-pointed rock, and blood running down his eyes from this wound so blinded him that he struck wildly with his butcher knife, the blade missing me about half an inch. I fully expected him to repeat the blow, but he lay still and made no effort to withdraw the knife from the ground. I looked at his eyes; they were set hard and fast, but there was a devilish sort of grin about his mouth as if he had died in the belief he had sent me before him to the happy hunting grounds."

BORN In REPUBLIC OF TEXAS General A. L. Steele of Houston, State commander of United Confederate Veterans, who presided over the sessions of that organization at Mineral Wells recently, is a real Texan, having been born in the Republic of Texas in 1841. General Steele enlisted from Limestone county and served in Company F. R. Q. Mills regiment, Granberry's brigade, Pat Clebourne's division, Army of Texas, in the forces of the Confedarate States of America. His father fought at the Battle of San. Jacinto and lived to be 93 years of age.

Expedition Through Unexplored Texas in 1854

By W. B. Parker (Continued from Last Month.) The 3rd installment in a series of lengthy and detailed articles where the author shares his experiences while attached to the expedition commanded by Captain R. B. Marcy, to explore Northwest Texas in the Summer and Fall of 1854. Fascinating eye-witness & day-by-day journal of events on early frontier.

Brady (Texas) Standard. Oliver Loving and Charles Goodnight efforts to expand TX cattle industry after Civil War. The Loving Goodnight Trail was started in 1866. It left Young county, ran southwest. to the Pecos River, and here it turned northwest and followed the general course of the river 400 miles to Ft. Sumner.. Then it crossed the divide between Platte and Arkansas rivers, seventy-five miles east of Denver, and ended at the mouth. of Cow Creek.

Earle R. Forrest. Flagstaff was one of the very last of the old-time cowtowns on the last frontier, and to it drifted adventurers from all sections of the vanishing West; men who had driven stages and freight, wagons across the plains before the first railroad; old Indian fighters, town marshals, and cowpuncher's of the old trail days when John Chisum, Charley Goodnight, Colonel Jim Ellison, Shanghai Pierce, and a host of others drove herds of longhorns from Texas to Abilene, Wichita, Dodge City, Ellsworth, and other Kansas shipping points. They were all old in. the ways of the West when Flagstaff was born. Some of them drifted on and disappeared, while others remained, a few to become cattle kings, but most of them to spend their declining years in near poverty.

Further Mentions: the A One Bar, the Circle S, and, the C O Bar outfits were supreme on the northern Arizona range. The-first settlement at Flagstaff was in 1876 when T. F. McMillan built, a.log cabin and corral at a spring in the pine forest just north of the present town. Lieutenant Beale, The beginning of the cattle business of northern Arizona dates back to the Mormon migration in the seventies, which was started by John D. Lee, the pioneer of the Grand Canyon. Fifteen years after the Mountain Meadow Massacre in Washington county, Utah, on September 16, 1857, the federal government learned that Lee had planned that terrible affair; and in 1872 with the fear of capture always near, he fled across the unknown Painted Desert to the Grand Canyon, where he remained for several years. The year previous some Mormons had tried to establish a ferry across the Colorado river at this point, but with little success. John D. Lee, Lonely Dell, John L. Blythe, Panguith, Utah, William Stokes, a deputy United States marshal, Beaver City, Utah, Mountain Meadow, Utah, the scene of the terrible massacre, Warren M. Johnson, Lee's Ferry, John D. Lee, Brigham City, Saint Joseph, Fort Moroni and Mormon Dairy, Tuba City and Moenkopi, John W. Young, Antoine Leroux, guide of the Sitgreaves expedition, John Wood, the Arizona Cattle Company, the Aztec Land and Cattle Company, Babbitt Brothers,, Lot Smith, Megrens and Sherman, Acker and Walker, Vanderlip Brothers, Lieutenant A. W. Whipple, Alma Iverson, Joseph W. McMurrin, and John L. Blythe, John W. Young, Jesse N. Smith, and Ammon M. Tenney, Fort Wingate, Fort Rickerson, in honor of Charles L. Rickerson, Edward E. Ayer, T. M. Riordan, THIS IS EXCELLENT AND DETAILED HISTORY OF THE AREA AND OF ARIZONA CATTLE BUSINESS – A MUST HAVE IF YOU HAVE INTERESTS IN THIS SUBJECT!

A. Huffmeyer. (Includes old B & W image of Huffmeyer) Bandera is one of the oldest Polish communities in the U.S. This is an account of both Polish and other early merchants in the area – great history and geneaology. The first store ever opened in Bandera was put up by Ed Oborski, a highly educated gentleman landing here from Poland a short time after the colonists had establislyed themselves. This store was. located where the John Adamietz residence is now located. Mr. Oborski conducted this store, supplying the meager wants of the people until 1867, selling out at that time to Chas. Sclimidtke and George Hay, who moved it to the old courthouse.

It was a perfect day in the spring of 1869 at the Davis plantation at Montopolis ford, near Austin. In those days, there were no bridles over Texas rivers and few ferryboats. The Montopolis ford was one of the safest and best fords on the Colorado river and cattle by the thousands were crossed at that ford as they were driven to Kansas City. On this perfect day three little girls, five, seven and eleven years old were down in. the orchard chasing butterflies, listening to the songs of birds, and gathering wild flowers. After a while they climbed up into one of the tallest peach, trees. Not that they were after fruit, for it was not yet ripe; but for the sheer pleasure of getting a wider view of the country-side and feeling a little, nearer to the fleecy clouds which tempered the heat of the golden sunshine. Suddenly the three children heard a great roaring noise, Peeping through the foliage of the trees they saw the negroes running toward the house. "Uncle Len", as the children called him, who was leading, was gesticulating frantically, and calling to the children. They listened and heard him saying, "You chiluns git outen dat tree and run to de house as fas' as you little legs can take you." And Len, himself, was fleeing to safety as fast as his Old legs could take him, as were all the other negroes.

The children asked no questions but obeyed instantly. As they fled to the house, they looked back and saw cattle coming up the bluff and into the field not by dozens, but by hundreds. They heard Len saying, "Dat hol herd o' cattle has done, stompeded."