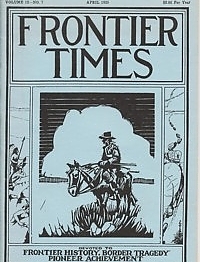 The Fight Of The Little Brazito

A battle notable in heroism, glory, importance, and in the ability of its commanding general is the battle of the Brazito, which was fought Christmas Day in 1846, by the forces of Col. Doniphan, which numbered less than 700 men, against a Mexican force of over 1,400, which included 574 regulars of the famous Vera Cruze dragoons. It was fought in open formation, no adobe walls or cotton bales were available to fight behind. The fierce battle which left forty Mexicans dead and over 200 wounded is the subject of this excellent account.

Account of the destructive hailstorm that hit San Antonio in 1868. The following was taken from the files of the San Antonio Express. The article published 'on May 20, 1868, reads:

"Yesterday the sun set as usual with no appearance of a storm. At 7:30 p.m. the heavens darkened, the wind commenced to blow from the north and the lighting became very brilliant. It continued thus until 8:30, when the wind freshened, the rain commenced to fall, and within 15 minutes it had increased to a hurricane, accompanied by the most fearful hail shower ever known.

"Chunks of ice fell as large as …

Tragedies Of The Frontier

This account gives an excellent summary of the cause for the great uprisings among the Comanches in Frontier Texas from the 1850’s onward and then focuses in on one especially brutal tragedy that took place in Brown county in 1873. This was among the last Indian raids in that county, and is a typical case and shows what the pioneers endured in the early settlement of Texas.

Early one morning in the above mentioned year, while Mr. Williams was away from home after timbers to complete his cabin, Mrs. Williams was in the cow pen milking. She had with her a little girl some seven years old, aid her baby about ten months old. It was very cold, and to keep the children warm Mrs. Williams made a fire in the cow lot, and while busily engaged in milking she was attacked by a party of Indians who shot several arrows into her body. Thinking they had killed her, they took the baby and dragged it through the fire, burning it until they thought it would die, then left, taking the little girl off with them, and taking at the same time an old side saddle for the little girl to ride on. After the Indians left, Mrs. Williams, mortally wounded as she was, carried her baby into the house and dressed it, but she evidently died soon afterwards. In a short time her son came home and found the mother murdered and the baby in the agonies of death. The baby was carried to a neighbor's home, where it died and was buried with' its mother.

In the same year, 1873, a party of surveyors, while engaged in locating and surveying railroad lands on the head waters of the Brazos river, discovered the body of a small white girl on the Salt Fork of that stream. The party encamped one night near a small canyon tributary to the Salt Fork. The teamsters, as usual, belled and hobbled the oxen and turned them out to graze. Early next morning they went out to gather in the teams preparatory to breaking camp. In a short time one of them hurriedly returned, very much excited and frightened, and it was with much difficulty that he related the cause of his panic. Finally he managed to tell that he had found evidence of an Indian camp, in which he saw the remains of a human being hanging…

JONES PRAIRIE, in Milam county, was one of the first permanent settlements in Sterling P. Robertson's Colony. Joseph P. Jones, planted his league of land there soon after he arrived from Illinois in 1833. This account carefully traces out the history and development of the area.

Tribute To A Pioneer Judge

Account of Gordon B. McGuire born 1818 at Ledbetter, Fayette county Texas. A pioneer judge in the truest sense, he held the balance of power in administering justice -over one of the largest and most important districts in West Texas. When only twenty years of age, he was unanimously elected City Attorney of Gatesville, Texas, and filled the position with such universal satisfaction, not only from the standpoint of the prosecution, but from that of the defendant, that in 1900 he was elected District Attorney for the 72nd Judicial District in West Texas In 1925 when the 106th Judicial District was created, he was made residing judge, a position he held for many years. This is his story.

Thomas Ingles Smith was a member of Austin's Colony and faced all the dangers of those noble pioneers. After coming to Texas he was appointed to sectionize Navarro county, which embraced a part of Milam, Ellis and Hill counties. The Cherokee Indians went on the war-path in an effort to stop the work, and his company and two other companies were assigned to subdue them. The Indians were located in a deep ravine on Chambers Creek, and one of the captains, who ranked Captain Smith, ordered the troops to go up on the hill to fight the Indians. Captain Smith told him if they went up there some of them would be killed, but the order stood and when they reached the top of the hill, Abram Smith, the last man to form in line, was killed. Two of his nephews, William Smith and Guy Stokes, caught him as he started to fall from his horse, when an old renegade stepped in view and told them they could take him to hell if they wanted to, but he was going to have his scalp first. They took the corpse fifteen miles down Chambers Creek and buried it, and burned a brush heap on the grave, and after the fire had died down, they rode their horses over the spot, giving it the appearance of an abandoned camp.

By W. B. Parker (Continued from last month)

Another installment in a series of lengthy and detailed articles where the author shares his experiences while attached to the expedition commanded by Captain R. B. Marcy, to explore Northwest Texas in the Summer and Fall of 1854. Fascinating eye-witness & day-by-day journal of events on early frontier. One of the many excellent things the writer details, is the manner of provision while on the trail. In many places, he goes into great detail regarding the hunting and fishing that was necessary for their survival. You will be surprised to hear of some of the adventures this afforded. (We can provide you with the rest of the installments in this excellent series - just ask)

Cowboys have been the paraded and advertised features of the West from the time that Cortez pushed his Spanish cattle overboard to swim ashore, and dumped his branding iron on the soil of Mexico. They came into existence with that first cargo, and the cow was the first commercial product of the Southwest.

With 150 years of cow history there was considerable progeny, and the Texas historian, James Cox, commenting on the unlimited supply at the close of the Civil War, said: "All it took to start a ranch was a branding iron and nerve enough to use it." This is the story of the early development of Texas’ greatest industry and one of the most colorful aspects of her history.

At the storming of Bexar, as the entry into the city was styled by the Texans, Colonel Milam led a column of the invaders down Soledad Street, and Colonel Frank Johnson led a column down Acequia Street, now Main Avenue. They had been entrenched at the Molino Blanco, owned and operated by my grandfather, Jose Antonio de la Garza, at a point on the river now known as Fourth Street, They had been firing into the city from that point. The volunteers, who were never spoken of as soldiers, on reaching the inner precincts of the city, occupied the Garza dwelling. where the Wolff & Marx building now stands, and the Veramendi Palace, now a part and parcel of the Solo Serve stores and the San Antonio Printing Company...

Account of Captain Dan W. Roberts, pioneer, Indian fighter and Captain in the State Ranger forces. Captain Roberts was born in Winston county, Mississippi on October 10, 1841, the son of Mr. and Mrs. Alexander Roberts. Mr. Roberts while a very young man, was made lieutenant of one of the companies, then a short while later, when his captain, Rufe Perry, resigned, he was made captain, and remained in this service for his State until 1881, and during that long lapse of years, Captain Roberts gave of his best, and on down through the coming years, the service of this gallant Texan will continue to live and exert an influence for bravery, for honor and strict integrity. This is his story.

The early history of Nueces county is, to a large extent the history of all that territory lying between the Nueces and the Rio Grande rivers. Nueces county was first organized on April 18, 1846, when the Texas legislature passed an act establishing Nueces county as follows: "All that part of San Patricio lying between the Nueces and Rio Grande rivers is hereby incorporated in a county by name of Nueces, and in a direct line from, the junction of the Cibola creek with the Rio Frio, at a point 30 miles above its junction with the Nueces; thence in a direct line to the town of Laredo, shall be the dividing line between the counties of Nueces and Bexar."

The history of Nueces county, as that of the entire gulf coast section of Texas, began as far back as 1519. In that year Alvarez De Pineda, a Spanish explorer, visited this coast, and made a map of it. On this map he designated Corpus Christi bay as Espiritu Santo. But permanent settlement of Nueces county did not begin until 1839, when Colonel Kinney, an adventurous young Irishman from Illinois, established a ranch and trading post at Corpus Christi. This was the first American settlement west of the Nueces. It was also the only part of the disputed territory between Nueces and Rio Grande over which Texas exercised any actual jurisdiction prior to the Mexican War, 1845-1848. This story traces out the early development of the area.

This article accurately depicts the controversial and even litigious historical origins of the well-known frontier ballad "Home, home on the range."

Site Of Packsaddle Fight May Be Marked

The author of this account was a participant in the bloody battle and here details the event.