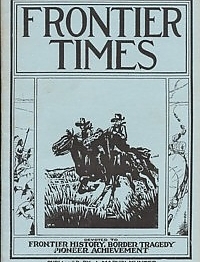 NEARLY everyone who has read western history knows something about the Mountain Meadows massacre, which took place in southern Utah in September, 1857. Most of the facts connected with that tragic episode have long since been made public. However, this story includes the details from a diary discovered in 1935 which sheds some new light on the affair, and is particularly interesting to readers of this publication because it shows that except for the treachery of a Mormon guide, that unfortunate party of emigrants would have been rescued by a company of resolute Texans.

Old Geronimo Of The WBG Brand

Account of OLD GERONIMO, a long horn Texas steer raised by W. B. Grimes of Kansas City, and ranged on his ranch on Matagorda Bay on the coast of the Gulf of Mexico. He was the leader of the herd all the way up the trail from Texas all the way to the W. G. Ranch near Buffalo Gap, South Dakota, late in July, 1882. He was a model leader, never hesitating, but plunging into swollen streams and, as the boys termed it, "busted them wide open." This is his story.

The Killing Of Billie Vollrath In Wilson County

IT WAS IN the month of December, 1877, the writer, then a lad of about nineteen years, left his home in Lavaca county, Texas, in company with L. S. Norrell and family en route to Wilson county, where he resided for several years, working on various ranches in and around that section. On or about the night of December 23, 1877, I was at the Gouger ranch, about three-fourths of a mile from the Vollrath ranch, together with William Mangham, George Norrell, Levi Norrell, and another mail whose name I have forgotten. We were all engaged in a friendly game of casino, a game played with cards. A little past 9 o'clock we heard a shot fired. We all heard it, and each one looked up, but no one said anything, and so continued our game. About twenty minutes later the dogs outside raised a fuss, and some one halloed. Three of us immediately answered and going outside found Adolph Vollrath there, accompanied by a negro boy who was scared almost white and trembling all over. Vollrath said to us: "Gentlemen, will some of you go over to my house with me ? Somebody slipped up to the window and shot Billie right through the head." We all agreed to go over with him and immediately started for the Vollrath ranch, which as above stated was only a short distance away.

So begins this historical account of the mysterious and brutal slaying of Billie Vollrath.

Brief account of 1819 expedition for the invasion of Texas organized at Natchez under the leadership of Dr. James Long. It was part of the series of attempts by Anglo-Americans to wrest Texas from Spain.

Mentions: A Mr. Foley of Denison in July, 1873, was charged with violating the Civil Rights Bill because he refused to admit Clara Williams, a negro woman, to the ladies' car * Judge Duval * The Querro Star, May 10, 1876, says that at the request of a number of ladies, the negro Sam Thomas, charged with rape, was hung on a tree where they could see the performance. * Allan Dillard, who came to Texas in 1835, and Uvalde County in 1855 * the Seguin Times * Solomon Tanner * The Texas & Pacific Railroad * that DeWitt county is infested with rival bands of men who are hunting each other, 35 or 40 in each party, with double-barrelled shotguns, and six-shooters * Lieut. Charles L. Hudson, a gallant and efficient officer * E. J. Davis * Adjutant General Britton * Ed Campbell of Atascosa County * Jourdan Campbell * Moses Oppenheimer, W. M. of Alamo Lodge No. 44, F. & A. M. * Selman * George Pheiffer and R. B. Evans from Comal Lodge * W. F. M. Ross * Mr. Shepperd * Rossville in Atascosa County * J. O. Dillard from Rusk

Changes I Have Observed

Andrew Jackson’s marriage to Rachael Donaldson, was the fatal error of his life, and left a scar from which neither he, nor his reputation ever healed. His whole public life, like his private life, was marked by a strong purpose to follow his own bent, regardless of consequences, and he carried his points by the sheer force of his character. It was in this same spirit that he invaded another man's home and carried away his wife, paying no heed then to how the world might look up on it. He fell in love with her, he wanted her for himself, she reciprocated and he took her boldly away. This is the sad account.

THE APRIL issue of Frontier Times included the account of the "Fight of the Little Brazito", by the forces of Col. Doniphan and a Mexican force, which was fought Christmas Day, 1846. After his capture of El Paso (now Juarez) Colonel Doniphan spent forty-two days establishing a form of government, resting up his men, and preparing for his campaign against Chihuahua. This is the story.

IN THE WESTERN part of Wilson county stands a scattered few residences that mark the site of the once thriving village of Fairview. Why it was located at this particular spot, is difficult to understand; as it was about three miles west of the old San Antonio and Oakville road, about five miles east of the road from San Antonio to Dog Town (Tilden), and about three or four miles north of an unfrequented road leading from old Lodi, or what later became Floresville to Pleasanton. This spot was not chosen from a fear of officers of the law, for here was located the seat of Law for a large portion of Southwest Texas. About one and a half miles south of Fairview stood the "Old Rock Church," known far and near as the pioneer church of a large territory reaching from San Antonio to the Nueces River. Here was the home of old Jeptha Lodge, one of the early Masonic Lodges of this portion of the state, and here was the meeting place of the last Vigilance Committee of Texas. Here is the account.

By John A. Mista

Account of Burt Alvord, the constable at Willcox, AZ and the deputy, William Downing, a well-to-do cattleman who were participants on a posse that pursued the perpetrators of a Southern Pacific express train robbery in September 9, 1899. Alvord was conspicuous in the posse not because he was an officer of the law, but more from the fact that he was one of the noisiest and most active pursuers of the train robbers.