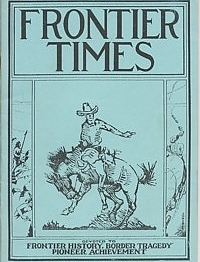 In 1874, Grant being president and General Sherman in command of the army, it was decided to send a strong expedition to the country to west of the Black Hills country, where Old Ft. Phil Kearney was situated, to re-establish that Fort, (which had been abandoned since 1869), and have sufficient force in the Sioux country to keep prospectors out of hills until arrangements could be made with the Sioux tribe.

On The Border With Mackenzie

Brief account of the true story of Gen. Mackenzie's campaign in Texas, Indian Territory (now Oklahoma) and Mexico 1871 -1875. The subjugation of the wild Qua-ha-da band of Northern Comanches and opening up for settlement of that once desolate wilderness, now a populous and prosperous country. Including "The Massacre of Salt Creek Prairie" "The Trial of Sa-Tan-Ta" and "Big Tree," "The Killing of SeTank "The Pursuit of Kicking Bird," "The Tragedies of Canyon Blanco" "On The Trail of Deserters" "Destruction of Mow-Wis Village" thirteen actions in the Pandhandle including Tule, and Palo Duro Canyons, "The Mackenzie Raid Into Mexico," saving of the Fort Sill Garrison-from journals, diaries, letters, etc, by the last surviving officer Mackenzie's column.

Considered the best of the many accounts of Quantrill's raid on Lawrence, Kansas, this is the version by given by James F. Legate, who was a resident of Lawrence at the time, and narrowly escaped with his life. His story was published in the St. Louis Globe-Democrat in 1898. It was Mr. Legate who carried the news to Leavenworth of the sacking and burning of Lawrence, and he told General Ewing, then in command of Fort Leavenworth, the way to head off the guerillas. Had his advice been heeded the outlaws would have been captured before getting out of the State. Mr. Legate took a leading part in border ruffian troubles during the early territorial days in Kansas. He served nine terms in the Kansas Legislature, and passed through some exciting times. His story contains some historical points about Quantrill's famous raid never published before.

From the time of the organization of the first Texas Ranger company in 1842 down to the very present the Rangers have been a very effective force toward the establishment of law and order within the boundaries of Texas. After subduing the hostile Indian tribes and driving Mexican bandits from the frontier, the aid rendered by the Texas Rangers in the older and more conservative communities always produced a speedy and quiet return to lawful methods of setting all disturbances and local issues without much difficulty or any actual violences. But this was not always so, as in Sabine county in March, 1887, Captain William Scott and a small detachment of his company were severely handled by a band of local disturbers and desperadoes known as, the Conner gang. This is the story of that and other similar events.

Account describes the life of a Federal officer in Texas prisons during the Civil War. Many Civil War veterans, Federal and Confederate, have written their "memoirs" and "reminiscences," but a very few have treated of such subjects or have narrated such incidents as are found in Col. Nott's little volume of two hundred and four pages. This account is from that rare book.

With his regiment, the 176th New York Volunteers, nicknamed the "Ironsides" regiment, Col. Nott sailed from New York in January, 1863, to New Orleans to take up a position several miles to the west of the city in the LaFourche district, to guard the lines of the New Orleans & Opelousas railroad. Very soon after his arrival in Louisiana, Nott contracted malarial fever, and when his illness was at its worst, his detachment was attacked at Brashear on June 23, and he was made a prisoner along with several of his fellow officers. His captors, the colonel relates, were "the wild Texans" of Col. Bates' battalion. This is a very graphic and sobering story.

The Austin Statesman, Sept. 18, 1874, says that eight inches of rain fell there in 36 hours and the stage line between there and San Antonio had lost eight valuable horses. They died from over-heat on account of heavy mud which was axle deep at San Mar cos. The wheels of the stage became so clogged up that the driver had to stop every few yards and clean off the wheels. It was held up 12 hours at Onion Creek.

A Mexican attempted to assassinate Sebastian Beall in Oakville, in 1872, wounding him in the head. Some enemy of Mr. Beall's is thought to have hired the Mexican to kill him.

The editor in 1874 deprecates the system of denuding our prairies of cattle by driving them to Kansas. He says if the habit is kept up, Texas will cease to be a stockraising country.

The editor in 1870 says the little town of Fredericksburg is to have two newspapers and he suggests that they change the name of the town to Guttenburg, as Guttenburg was the first man to starve to death trying to run a newspaper.

For those interested in seeking early Llano County genealogy and history, it is very unfortunate that the courthouse at Llano burned several times during the earlier days, destroying in each instance various records of the county. Fire also destroyed a number of the old mercantile establishments, where officials sometime; maintained their office quarters. But fortunately the local Masonic lodge records have survived the years, the books containing the original minutes and proceedings of the lodge from its beginning on March 24, 1860 down to the present time, having been preserved. And while they are, strictly speaking, a history of the lodge per se, in them can be found many interesting facts about the members - information which in turn gives an insight into the manner of living and the activities in this section during the pioneer days as well as some EXCELLENT GENEALOGY AND HISTORY OF THE TOWN OF LLANO AND LLANO COUNTY.

This is the sad account of Silas F. Gibson, who struck it rich in the 1849 California Gold rush, and returned to TX to urge his brothers and remaining family to follow him out to settle in the golden State. Gathering their substantial cattle stock and possessions they made way on their trek toward CA, but were brutally ambushed by Indians at the Pecos river near the mouth of Black river. Here they fought courageously, seeking to protect their families and possessions and the battle resulted in the slaying of Silas Gibson. This account records excellent Llano and Blanco co. history and genealogy related to Gibson name in TX.

Colonel Upton Lorentz, of Comfort, Texas, relates his own personal knowledge of the old time western scout known as `California Joe,' specifically referring to some notes of an expedition in 1874, of which `California Joe' was a member, as well as the author, who served the expedition as `mule skinner' or tea sister.

Thomas Sullivan was born on April 10, 1824, in Logan County, Ky. Uncle Tom recalls vividly the events of Antebellum days, his experiences with the Confederate Army, his visits to the Mexican border hauling cotton, and later his trips to the North and East selling horses and cattle for his former master. His mother was set free at the age of nine and one-half years when George Washington died. Freed slaves in those days, however, did not remain that way for long if unscrupulous whites could help it, and the Sullivan family suffered the fate of many others. They were "sold down the river" when Tom was only seven years old, going to a farm in Monroe County, Miss., as the property of Col. Redus. When the colonel died in 1848 the property, including the slaves, was divided among the heirs. The slaves, according to the law, were placed "on the block" and sold to the highest bidder among the heirs, no outsiders being allowed to bid. Tom became the property of Bill Redus.

Who Inhabited This Mystery Village?

This account addresses the question, who inhabited the "mystery town" near Camp San Saba in Southern McCulloch County?

This question has puzzled the people of this section since the 1860’s. No light has ever been shed upon the identity of this phantom village of a hundred or more inhabitants. Not even a ghost walks those eerie streets at night to furnish a clue about this band of courageous men and women who battled the Indians at least a century before civilization came to this section. Remnants of stone foundations are mute evidence that a small town with six or seven business houses and a substantial residence district once existed on the north' bank of the San Saba River, about 400 yards above "Flat Rock Crossing" on the old military road from Fort Mason to Camp Colorado and a mile east of the present concrete bridge on State Highway 9.