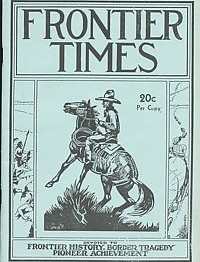 A Description Of Texas Sixty Years Ago

Description of Texas frontier from the New York Times, 1874

In the early school days of Texas very few people lived near the school house. Many of the pupils had to walk from two to four miles twice a day to and from school, and three months was the limit of the school term. A dollar and a half to two dollars was the regular tuition fee charged each scholar. This was paid at the end of each month. Later the South was given the benefits of free schools, when the term was lengthened to six months.

Often the fathers or older brothers would have to take their guns and accompany the children to school, for the Indians had not been entirely driven out of the country, and often a band of these savages would swoop down on a little settlement of white people during the light of the moon, and strike terror to the hearts of the bravest of them. The children, in going to and from school, went through many dangers and hardships, which the boys and girls of todev know nothing about - This is an excellent account

THE FINGER OF SUSPICION.

Col. F. M. McCaleb, veteran newspaper man, who wrote of early days in Southwest Texas, his articles being published each Sunday in the San Antonio Express, tells of a near-tragedy in Frio county, in the middle 1870’s wherein Virgil Johnson, a pioneer rancher, came near being the chief actor. This is his story.

San Antonio Express West Texas, Borden County and its county seat, Gail, are named for Gail Borden, who with his brother edited at San Felipe, in 1835 the first Texas newspaper-then called The Texas Telegraph. This Gail Borden was also the inventor of condensed milk, now a popular culinary necessity. The town of Borden in Lavaca County, 160 miles from San Antonio was named for him. This is his story

The Battle Of San Jacinto

From The Progress, Anahuac, Texas. The story of General Thomas Jefferson Chambers, Texas patriot, and the man for whom Chambers county was named, is one of the state's most thrilling tales. Centering it is the village, now the bustling little oil metropolis of Anahuac. General Chambers, a dramatic figure, called it Chambersea and planned a city for it. His life was one of the most tragic in all Texas' long story. He died from the bullet wound of a murderer in his home in Anahuac, believing that the state which he helped to save from the clutches of Mexico, had been unjust to Him. Read the story and you will... Further Mentions: Orange county,Virginia * The Louisville Courier Journal * Miss Abbie Chubb * Chief Justice Roberts * Trinity Bay * Governor Jim Hogg * Miles Crowley of Galveston * Marsene Johnson of Galveston * Mrs. Kate Chambers Sturgis, and Mrs. Stella J. McGregor * Governor Miriam A. Ferguson * Dr. James F. Long, a native of Tennessee

Name Of Andrews In Texas History

The name of Andrews is listed with the great pioneer builders of Texas. The last statement of Big Dick Andrews, as he was mortally wounded in the early struggle of Texans with Mexico, "I'm a dead man, boys, but don't let the others know it; keep on fighting to death," is one of the greatest patriotic heritages bestowed upon Texans.

The Texas Revolution was in the brewing when Richard and Micah Andrews of Alabama oiled their guns, packed their covered wagon and started for the "little two-horse republic under the Lone Star." Little did these two strong, large men dream as they drove over the muddy trails guided only by familiar landmarks, watched for Indians and made plans for the new life that they were destined to become Texas heroes. This is their story.

"Never Fool With A Fool"

This is the true account of how the career of buck-toothed young William Bonney began and swelled under the notorious name, "Billy the Kid."

Taking The Law To The Rio Grande